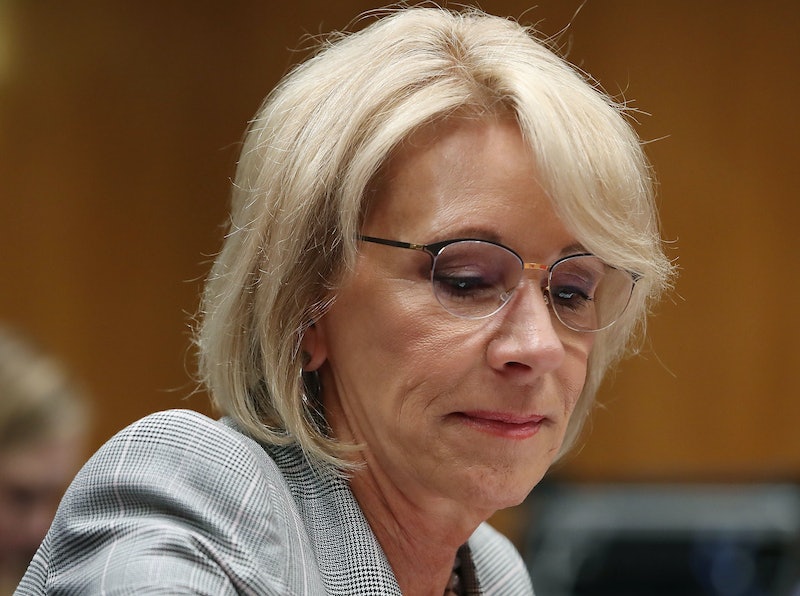 According to an NBC News report on Friday, Education Secretary Betsy DeVos' security detail could cost American taxpayers a whopping $19.8 million by September 2019. The news outlet reported that it reviewed figures provided by the U.S. Marshals Service, the armed detail that covers DeVos' security around the clock.

Bustle has reached out to the Department of Justice for comment. According to the publication, DeVos first received the constant armed security detail under the orders of former Attorney General Jeff Sessions on Feb. 13, 2017. DeVos, who was confirmed to spearhead the Department of Education on Feb. 7 that year, was confronted by protesters in Washington D.C., when she attempted to visit the public Jefferson Academy in the area.

According to the figures provided by the U.S. Marshals Service, DeVos' security detail reportedly cost $5.3 million and $6.8 million for the fiscal years of 2017 and 2018 respectively. For the fiscal year of 2019, the cost of DeVos' security detail could go up to $7.74 million. The secretary is the only cabinet member from Trump's administration to receive such a costly security arrangement, according to NBC News.

A spokesperson for the Department of Justice told NBC News, "The order was issued after the Department of Education contacted administration officials regarding threats received by the Secretary of Education. The U.S. Marshals Service was identified to assist in this area based on its expertise and long experience providing executive protection."

Now, if there was a cabinet member who had a similar costly security arrangement, NBC News pointed to the former Environmental Protection Agency Administrator Scott Pruitt. Pruitt's security detail amounted to $3.5 million. But that is still less than DeVos' reported arrangement.

In the past, members of the Department of Education have received security arrangements but they were normally from within the office's enforcement divisions. People like Arne Duncan and John King Jr., both figures from the Barack Obama administration, indeed had security enforcements but they came from the department, not the United States Marshals Service.

A spokesperson for Duncan said that although he had received death threats while on duty, he did not get the U.S. Marshals Service treatment. Previously, the only person to receive a security detail from the Marshals Service was the head of the National Drug Control Policy office.

A spokeswoman for DeVos, Liz Hill, did not elaborate on the threats but told NBC News that "it should be obvious that they are significant. Otherwise, the trained professionals who made the call to escalate her detail wouldn’t have done so."

The news network reported that the $12.1 million so far spent on DeVos, from 2017 and 2018, could have helped public schools, which already struggle financially, with some critical equipment and assistance. As just one example, the amount could have provided some 1,968 Pell Grants to students facing poverty in America.