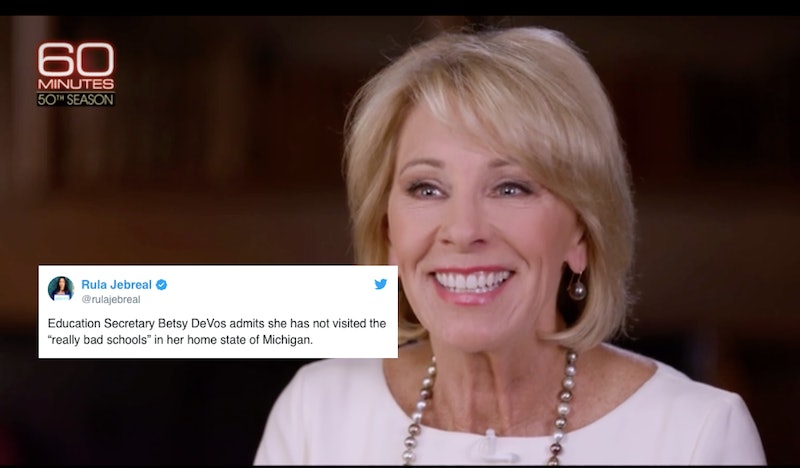 The U.S. Secretary of Education, Betsy Devos, appeared on 60 Minutes on Sunday, giving an interview that failed to impress many members of the public. During the interview, DeVos described herself as "misunderstood" when asked about the litany of criticism she has received since her confirmation as secretary. She also appeared to not give concrete responses to a variety of questions, prompting even more criticism.

At one point in the interview, CBS News' Leslie Stahl asked DeVos about the extensive criticism she has received from the public and from lawmakers. This criticism largely began during her Senate confirmation hearing, which saw her barely surviving the nomination process after Vice President Mike Pence had to cast the tie-breaking vote to approve her as education secretary.

Stahl asked, "Why have you become, people say, the most hated Cabinet secretary?" "I'm not so sure exactly how that happened," DeVos responded. "But I think there are a lot of really powerful forces allied against change." When Stahl then asked if the criticism against her "hurt," DeVos admitted, "Sometimes it does. Sometimes it does. Again, I think, I think … I'm more misunderstood than anything."

Many on social media hit back at DeVos' claim that she is misunderstood and also condemned her for not appearing to be well-versed in education policy. Indeed, Rolling Stone senior writer Jamil Smith even referred to DeVos as "the most dangerous Cabinet secretary in the Trump administration" — "and tonight's @60Minutes interview further exposed her utter incompetence and bewildering policies."

Many on social media were also left less-than-impressed with DeVos' responses to a variety of education policy questions, which appeared contradictory or misinformed at times. For example, Stahl pressed DeVos about her advocacy for school choice, questioning how students left at public schools would benefit if some children opt to leave these schools and take much-needed funding with them in the process.

Stahl asked, "Why take away money from that school that's not working, to bring them up to a level where they are— that school is working?" DeVos replied, "Well, we should be funding and investing in students, not in school— school buildings, not in institutions, not in systems."

DeVos also added that studies in Florida, where she notes there's "a lot of choice that's been introduced" reveal that when a large number of students opt to leave their original school and go to a different school, "the traditional public schools actually— the results get better, as well."

DeVos appeared to stumble when asked by Stahl if she had seen the same results in her home state of Michigan. When asked if Michigan public schools have "gotten better," DeVos replied, "I don't know. ... I can't say overall that they have all gotten better."

Stahl pressed DeVos further, noting that the secretary has had a "huge influence" over the direction of the school system in the state; in response, DeVos said, "I hesitate to talk about all schools in general because schools are made up of individual students attending them," but admitted that "Michigan schools need to do better. There is no doubt about it." DeVos also told Stahl that she had "not intentionally visited" any underperforming schools.

The above-described exchange is just one of several the drew people's ire on social media. In addition to criticizing DeVos, many also praised Stahl for her line of questioning.

Journalist Philip Rucker, White House bureau chief for The Washington Post, even suggested that Stahl was more knowledgeable about education policies than the secretary:

Overall, Betsey DeVos' 60 Minutes interview clearly made an impression, but perhaps not the one she desired — if the reactions on social media are any indication.