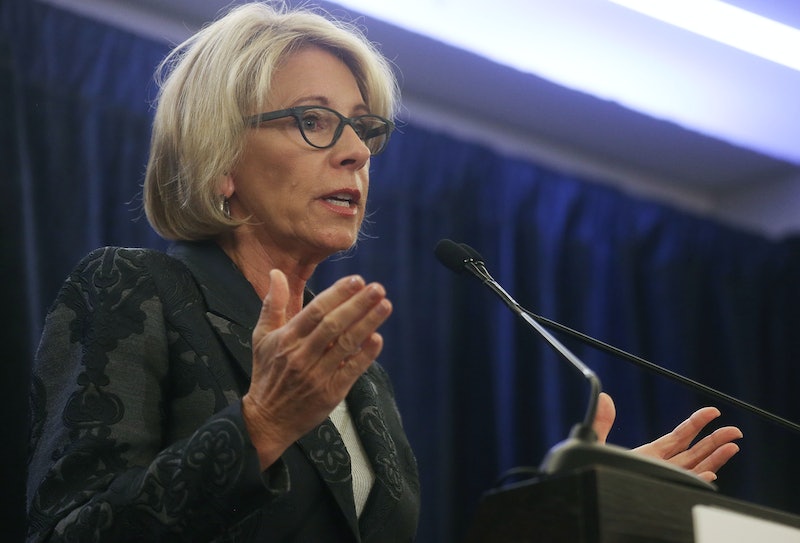 Betsy DeVos has been one of President Trump's more controversial cabinet picks. The secretary of education's Senate confirmation required a tie-breaking vote by Vice President Mike Pence, and her lack of experience in public schools has led many to believe that she is out of touch with the system she is tasked with leading. On Wednesday, Betsy DeVos was booed during a commencement address at a historically black university, showing just how much work DeVos has to do to gain public approval.

While receiving an honorary doctorate at Bethune-Cookman University’s commencement, DeVos took to the podium to speak with students about respecting diverse opinions.

"While we will undoubtedly disagree at times, I hope we can do so respectfully. Let's choose to hear one another out," she said. But her voice could barely be heard over the auditorium full of booing students, who shouted and spoke over DeVos in an effort to stop her address.

Over half of the students in the room even stood up and turned their backs to the secretary of education, sparking the hashtag #BacksToBetsy. The demonstration was so distracting that the university's president, Edison Jackson, actually took the microphone from DeVos and tried to calm the students down.

"If this behavior continues, your degrees will be mailed to you," Jackson said, amid more shouts and boos. "Choose which way you want to go."

This hardly did enough to calm students. Shouts continued throughout the remainder of DeVos' speech, and some students were even escorted out of the auditorium, according to CNN.

DeVos faced backlash in February for stating that HBCUs were "pioneers of school choice," an obvious falsehood, and pretty insensitive statement, given that HBCUs were founded exclusively because racism and segregation prevented black students from being accepted into traditional schools.

DeVos later apologized for her remarks, stating that HBCUs were "born out of necessity" and "made higher education accessible to students who otherwise would have been denied the opportunity." But given her reception at the commencement address on Wednesday, DeVos may have a lot more work ahead of her to make amends.

“For someone to come and speak at my commencement that cannot relate to me or know what I have been through is kind of like a slap in the face,” one Bethune-Cookman student told the Washington Post.

Petitions to stop DeVos from giving a commencement address at Bethune-Cookman began circulating as soon as her appearance was announced, and gained over 50,000 signatures. Ultimately, the petition was unsuccessful, and despite the outrage and boos from students at the commencement on Wednesday, DeVos completed her speech, which focused on listening to and respecting diverse perspectives.