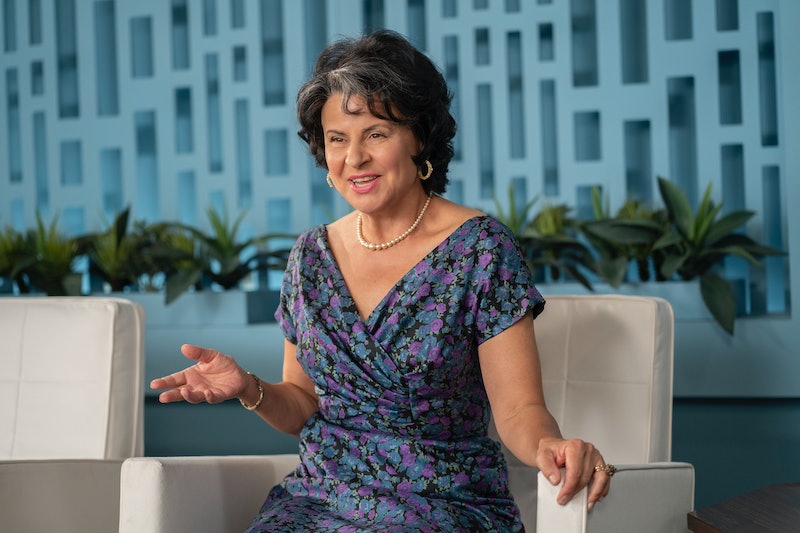 Legendary feminist activist Betty Friedan is best known for writing The Feminine Mystique, which is widely credited with kicking off the second-wave feminist movement by spotlighting the unhappiness many women felt in their roles as housewives. And in the FX series Mrs. America, Friedan is shown lobbying Congress in support of the Equal Rights Amendment. She knew the struggles of her book's subjects and those wanting the ERA to pass all too well, because when Betty Friedan had kids, she found herself discriminated against at work.

When Friedan got pregnant with her second child, she was fired from her job at a labor newspaper in New York. "After I was fired for being pregnant, I was technically a housewife," she told PBS. "And it was the era that I later analyzed, the 'feminine mystique' era, [when] 'career woman' was a dirty word." According to PBS, while raising her three children in Rockland County, New York, Friedan also began freelancing for women's magazines, work that she later parlayed into writing The Feminine Mystique. After the book came out, and the National Organization for Women co-founder lived much of her life in the spotlight, as she organized rallies and protests on behalf of women's rights and the Equal Rights Amendment.

Friedan's second-oldest child Jonathan later recalled to the New York Times what it was like to go to his mother's legendary 1970 Women's Strike for Equality on Fifth Avenue in New York. He said he initially planned to go because he was worried no one would show up and he didn't want to see his mother disappointed. But on the actual day, the street was so jam-packed he couldn't even find his mother until he climbed a wall to see her on stage. "This was the moment I realized who she was," he said. Jonathan's older brother Daniel couldn't attend the march because he was out of the country, and his younger sister Emily had been fighting with her mom and didn't go out of spite. "It wasn't her fame I resented," Emily told the NYT. "It was her, as a mother. I regret that I didn't go. I probably regretted it then. But I wasn't going to do anything with her."

CBS News reported that at Friedan's funeral in 2006, Jonathan acknowledged the children's complex relationship with their mom, saying, "Betty was not the perfect mother. Emily, Daniel, and I ate TV dinners growing up way beyond the recommended limit." However, he said seeing the work she did for women made him "burst with pride."

Friedan spoke at length about her children and her housewife days in her PBS interview, saying, "I loved my kids. And I loved my house, and I loved a lot of things about my life in the 1950s. But there were a lot like me in that era, very overeducated housewives." She added, "For my generation and those that followed us, of educated women, you could be plenty busy as a housewife, mother, when your kids were little, but it's not enough." So she sought to use her mind elsewhere as her children grew up. Like their mother, her children went on to have illustrious careers too, eventually becoming a physics professor at Rutgers University (Daniel), an architect in Pennsylvania (Jonathan), and a Harvard-trained pediatrician in New York (Emily).

Mrs. America is all about portraying the layers of complex women on both sides of the ERA movement, and based on what her own kids have said about her, Friedan is certainly one of those complicated characters.

More like this
Kim K Really Wants You To Know She's Having Sex
By Sophia Benoit
How Director Quinn Shephard Turned Dylan O’Brien Into A “Viral Weed Blogger”
By Samantha Leach
The Ending Of 'Prey,' Explained
By Morgan Leigh Davies
22 Movies On Netflix That Are Perfect For The Whole Family
By Bustle Editors
Get Even More From Bustle — Sign Up For The Newsletter