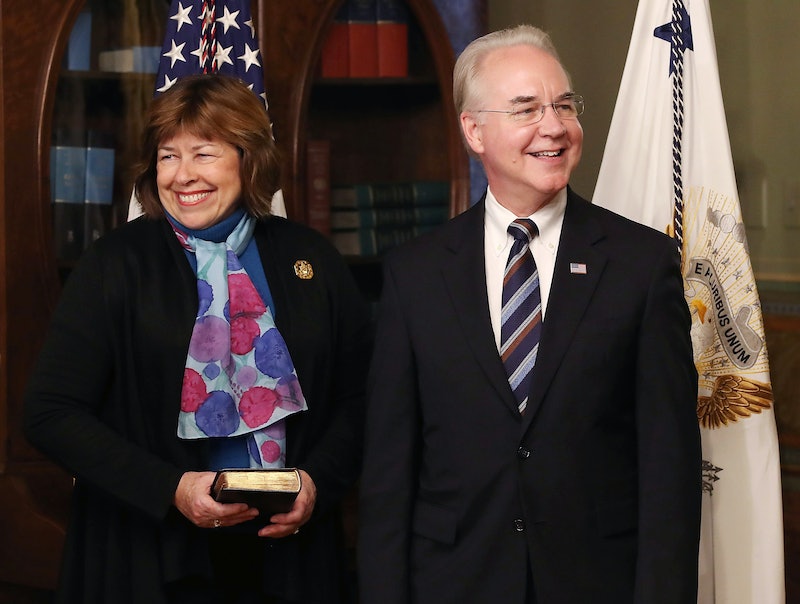 Georgia state Rep. Betty Price asked a legal question last week that has stunned some observers. In a public hearing, Price asked about the legality of quarantining HIV patients in order to quell the spreading of AIDS. Later on, Price walked back on her comments and clarified that the "provocative" and "rhetorical" question was "taken completely out of context." But in spite of her clarification, advocates say Price's comments hurt HIV patients — a community that has been on the receiving end of social and institutional stigma for years.

In a question posed to Georgia's director of the HIV/AIDS Epidemiology Surveillance Section, a part of the state's health department, Price asked:

And I don't want to say the quarantine word, but I guess I just said it. ... So we have a public interest in curtailing the spread. What would you advise or are there any methods legally that we could do that would curtail the spread?

"First of all, the stigma of HIV is tremendous just in and of itself," Penner says. "Layer on the fact that you have someone asking whether or not it's legal to quarantine anyone, let alone people living with HIV. It's abhorrent. It really is something that further stigmatizes — it works against everything advocacy groups are trying to achieve in terms of access to care, and getting people treatment."

Penner is pointing to the documented abuse and marginalization HIV patients face in societies across the world, including the United States of America. Avert, an independent charity organization for HIV patients, estimates that nearly one out of eight people with HIV fail to receive immediate medical supervision due to stigma and ostracization. And stigma manifests in a dizzying variety, from being socially shunned to being denied health services.

Price might be aware of this reality. In her clarifying statement to the The Atlanta Journal Constitution, Price said, "I do not support a quarantine in this public health challenge and dilemma of undertreated HIV patients."

The Georgian lawmaker, who is also an anesthesiologist and the wife of former Health and Human Services Secretary Tom Price, said that she wants "the public health arena" to work towards efforts that "result in resolve and commitment to ensure that all of our fellow citizens with HIV will receive, and adhere to, a treatment regimen that will enhance their quality of life and protect the health of the public."

Penner says that while Price's heart might be in the right place, her language doesn't help patients in the United States. According to the Centers for Disease Control and Prevention, around 1.1 million people in the country live with HIV.

"It's absolutely true that we want everyone to get treatment," Penner says. But he goes on to say, "[Price's statements] stigmatizes people living with HIV to the extent that they don't want to be identified, to know their status, to get into treatment, and to achieve the results that the treatment could actually provide them."

Such language can build a dangerous barrier between patients and much-needed medical treatment, according to Penner. "The [medical] treatment not only improves outcomes for HIV patients, it also prevents transmissions. So, you get a dual benefit of being on treatment."

Price, according to Penner, is however "suggesting all those people that do not achieve that or are not on treatment or do not adhere to what she thinks is the right way to go, they should be 'quarantined.' And that is unacceptable. It is a stigmatizing statement that really further pushes people away from getting treatment."