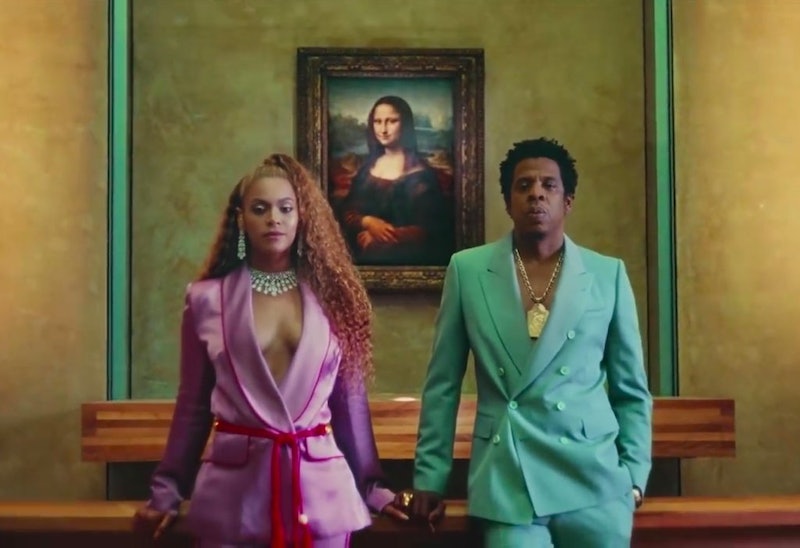 On June 16, the Carters released their music video “Apesh*t” to the masses. Its release was not only a surprise because, well, no one knew they were working on a joint album, but also because the video for the album’s first single was filmed in one of the most iconic locations in the world: The Louvre museum in Paris. For the past 200 years, the Louvre has remained one of the most important museums in the world, welcoming over 8 million visitors from around the world a year, yet it's no secret that representation within the museum is lacking. Most of the works featured at the Louvre were completed by white men and depict primarily white subjects, which is why Beyonce and JAY-Z’s choice to use the Louvre for “Apesh*t" has been so widely talked about. As an art history major, whose Twitter thread about "Apesh*t" went viral, it's clear people want to talk about the imagery used in the video seen by millions. And we should. Because by centering black bodies in a musical masterpiece in this location (for millions of people to stream), Beyoncé and JAY-Z are flipping the script on the standards of white beauty and power that are connected to the Louvre’s position in history as a traditionally white space.

Symptomatic of the Western artistic tradition, the Louvre does not contain any artworks by people of color, as they were completely excluded from the art world until the 20th century. Though women are often the subjects of the art on display, few paintings by female artists are included in the museum’s collection, a result of the historically exclusionary art world that considered maleness an essential function of artistic ability. One of the few works completed by a female artist, Marie-Guillemine Benoist’s "Portrait of a Negress," is a radical break from 19th century hyper-sexualized representations of black women as exotic sex workers and servants. This piece of art presents this anonymous sitter as a subject in her own right, an allegorical "Lady Liberty" who represents the struggle against slavery and women’s subjugation during the Napoleonic era. This painting is highlighted at the end of “Apesh*t,” and in a way exemplifies the Carter’s celebration of black independence, while emphasizing Queen Bey’s role as a female creator in what remains a predominately male space.

Although absent from Western art’s historical canon, black figures are in fact present in many paintings in the Louvre, though they are often reductive representations of slavery. With that in mind, “Apesh*t” visually and lyrically unpacks the history of Western art’s black figures by pairing images of contemporary black men and women alongside images of slaves. It is that awareness of recognizing and confronting the reality of this being their only representation within museum spaces that makes the lyrics of self-achievement and success, like “I can’t believe we made it, This is what we’re thankful for,” in the song so meaningful.

There is a lot to celebrate in “Apesh*t.” The black beauty, black joy, and black power that Beyoncé and JAY-Z have created in the video completely juxtapose the representations of nameless black men and women within museum spaces with portrayal of individual black success. Beyoncé and JAY-Z’s own success (more than an estimated $1 billion, according to CNN) is now on display. "Apesh*t" not only acknowledges the images and struggles of black people that came before them with visual allusions to the abolition movement (Benoist's "Portrait of a Negress"), police brutality against black civilians, and the subsequent protests by kneeling NFL players (seen mirrored in Myron's "Discobolus"), but it presents blackness as equal to whiteness in museum spaces by actually reframing Beyoncé and JAY-Z as the new and improved versions of some of the most famous artworks in the Louvre.

The first shot of the Carters is in front of the "Mona Lisa," the most recognizable portrait in the museum, yet instead of gazing upon the woman with the elusive smile, viewers cannot turn away from the Carters as they command the eye. The image of Beyoncé and JAY-Z standing there in front of the "Mona Lisa" has become one of the most iconic images since the video’s release on June 16. I think you could argue, however, that Beyoncé and JAY-Z have upstaged the "Mona Lisa" by becoming her. They have redefined “art,” by becoming the art, and creating the art, and sharing the art with people all around the world.

Something the "Apesh*t" video carefully chooses to do is not reduce the featured works to background noise, which is important. Rather, the artworks, which are classically white in nature, are essential to the success of the video because they contrast the blackness of Beyoncé with the whitewashing of history and the flawed construction of whiteness as beauty and power.

Although statues from antiquity like the "Winged Victory of Samothrace" and the famous "Venus de Milo" are striking in white marble, they were actually once brightly colored — which fits the video’s celebration of black beauty and denial that whiteness is a beauty standard. At one point in "Apesh*t," Beyoncé stands with JAY-Z in front of the "Venus de Milo," almost modeling herself as a Greek statue. This time she wears a nude bodysuit — far from the white draped outfit she had on before — assuming white-centric ideals of beauty with her brown skin and reframing both the goddess of beauty and the goddess of victory as a black woman.

If “Apesh*t” makes anything clear, it is that Beyoncé and JAY-Z are familiar with the history of art and of their place in it. A master of the carefully constructed image, Beyoncé has transcended typical simplifications of women in visual media by working with those around her to craft an identity that is unapologetically black — a celebration of black womanhood through the transformation of conventional white western iconography. By filming "Apesh*t" in a historically white space, Beyoncé and JAY-Z give faces to the nameless individuals who have been lost to us in a history that has prioritized white narratives, an act which in and of itself is radical. They’ve opened up the Louvre Museum to the general public, making it accessible to those who have been excluded from its galleries, redefining what we recognize as art in the process.

Author Heidi Herrera earned her art history degree from Brigham Young University, and is currently a master's degree candidate in art history at the University of California, Davis.