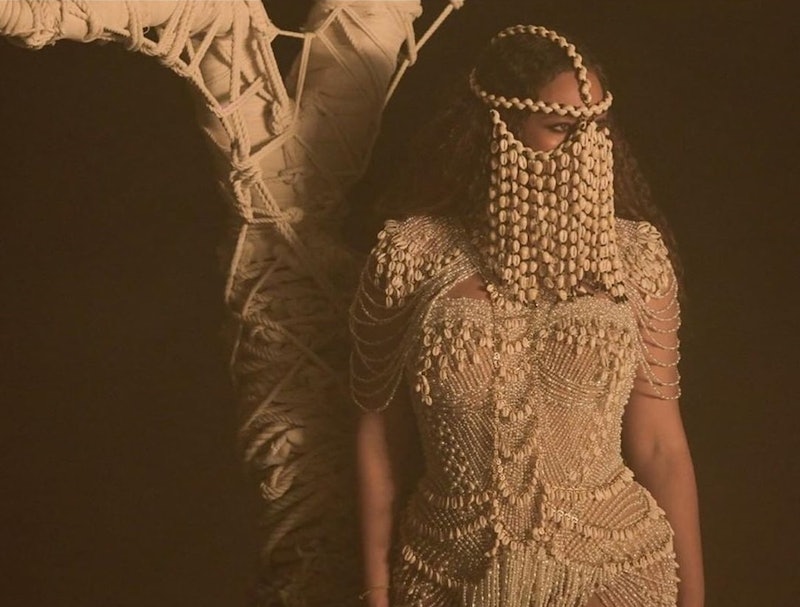 Beyoncé is known for wearing independent black designers while attending press events or walking red carpets, but now she has extended that privilege to music videos, too. Beyoncé wore a cowrie shell headpiece in her "Spirit" music video for The Lion King: The Gift. The music video was full of epic outfits and costume changes, becoming a couture visual feast in its own right. The Queen wore a whopping nine outfits throughout the entire video, one of which was the cowrie headpiece by La Falaise Dion. Dion is the designer behind her self-named brand La Falaise Dion, and the headpiece in question is the Lagbadja. According to Dion on Twitter, Lagbadja means the "unknown man" in Yorub, which is often used when the face of the person in unseen. Since the cowrie headdress covers Beyonce's entire face, the name makes sense.

The cowrie-and-chain veil was paired with a custom pearl bustier. In an interview with ABC's Robin Roberts, Beyoncé shared that the song and music video is a "love letter to Africa."

Dion is a Nigerian designer, and her brand is inspired by African spirituality and mystical practices. The cowrie has a special significance in African culture. "I learned that the history of my people was inseparable from that of the cauri," Dion shared on her site. "Old currency in West Africa, object of divination, communication link between men and spirits, the cauri represents wealth, power, the protection, the woman, the creation, the femininity, the sexuality."

Dion goes on to explain how the power of the cowrie is immense. "Its curved back recalls the belly of a pregnant woman. It is a symbol of fertility. The split that separates the two parts, represents the duality."

Dion's brand is the designer's way to not only honor her ancestors' history, but to write her own. "It is time for us black Africans to reconcile with our heritage and reclaim our culture; our spirituality, our gods and embrace it. Our history, we must write it for ourselves. Therefore, I write mine, that of my people through my creations. They are an invitation to discover my story," she explains on the site.

The Lagbaja headdress is reasonably priced when you consider that Beyoncé wore it. Costing only $336, the accessory is "a celebration of women as creative, divine, mystical, protective," according to the product description.

Beyoncé has worn African designers many times before. One notable look was her ankara suit from Nigerian designer Ena Udemb. Beyoncé wore the colorful suit and matching, dramatic hat in 2019 to the Swiss Beatz’s Dreamweavers exhibition at the UTA Artist Space in Beverly Hills.

Beyoncé's stylist found Udemb's designs on Etsy, and reached out to the designer to create a custom outfit for the 22-time Grammy winner.

Whether Beyoncé is wearing cowrie shell headdresses or colorful suits, the artist loves to use her platform to support African designers.