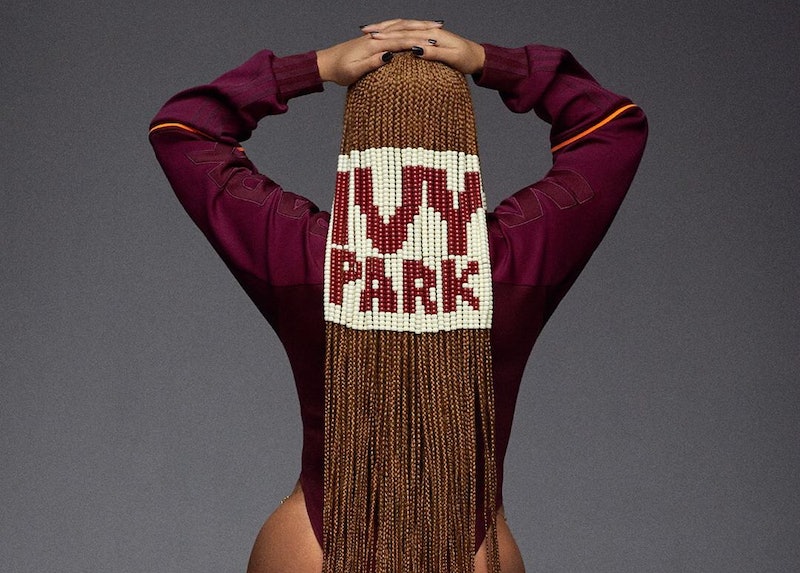 The Beyhive is buzzing, and it's for good reason. Beyoncé's Ivy Park x Adidas collection officially has a launch date. Queen Bey herself has given a preview of what is coming fans' way, and the sneak peek pieces will likely have people counting down the days until the launch.

On Dec. 9, Beyoncé uploaded a series of images promoting her athleisure brand Ivy Park's collaboration with Adidas. However, Beyoncé fans already knew that a relaunch of the Lemonade creator's brand was coming. The singer joined the Adidas label as a design partner back in April where she was said to be creating footwear and apparel as well as bringing her brand onto the label's roster. No one, however, knew exactly when Ivy Park x Adidas would come to fruition or what would be included. Now, fans have a date and the tiniest (but still exciting) snapshot of what's to come.

According to the captions added to Beyoncé's posts, Ivy Park will relaunch with Adidas on Jan. 18, but the date wasn't the only thing the singer revealed. The promotional images give fans a small sneak peek at what to expect from Ivy Park's relaunch. Based on the photos, the singer is dropping everything from athletic apparel to sneakers to jewelry, all in a burgundy and white color way.

Beyoncé's Instagram photos suggest that the new Ivy Park will combine athletic wear with street style, mixing sneakers with golden chain anklets and adding chic burgundy bodysuits and branded earrings to its lineup. For the upcoming relaunch, Beyoncé teamed up with Elle and Queen & Slim director Melina Matsoukas to debut even more pieces from the range and answer fan questions in a candid AMA. The versatility of the looks was key for her.

She tells Elle, "Versatility is a big part of the IVY PARK line and what inspires me. You can create your own style by experimenting and taking chances and continually reinventing your look with all of these pieces."

The new collection is also based on her personal style, but it has been expanded so that there are pieces for everyone — including new unisex and gender-neutral designs.

"This new line is fun and lends itself to creativity, the ultimate power," she says to Elle. "I focused on designing a unisex collection of footwear and apparel because I saw so many men in IVY PARK. The way they have embraced the brand is an unexpected gift. I appreciate the beauty of gender-neutral clothing and breaking the so-called fashion rules."

Now, Beyoncé fans can break the fashion rules on their own when Ivy Park drops Jan. 18.

More like this
Beyoncé Wore A Golden Sheer Gown At Her VIP Dubai Concert
By Sam Ramsden
Harry Styles Has Become An Accidental Vinted Model
By El Hunt
Aerie’s Curve-Hugging Offline Leggings Will Give You A BBL In Seconds
By Bella Gerard
Spring 2023's Hottest Shoe Trends Include Moto Boots, UGG Minis, & More
By Allie Fasanella
Get Even More From Bustle — Sign Up For The Newsletter
From hair trends to relationship advice, our daily newsletter has everything you need to sound like a person who’s on TikTok, even if you aren’t.