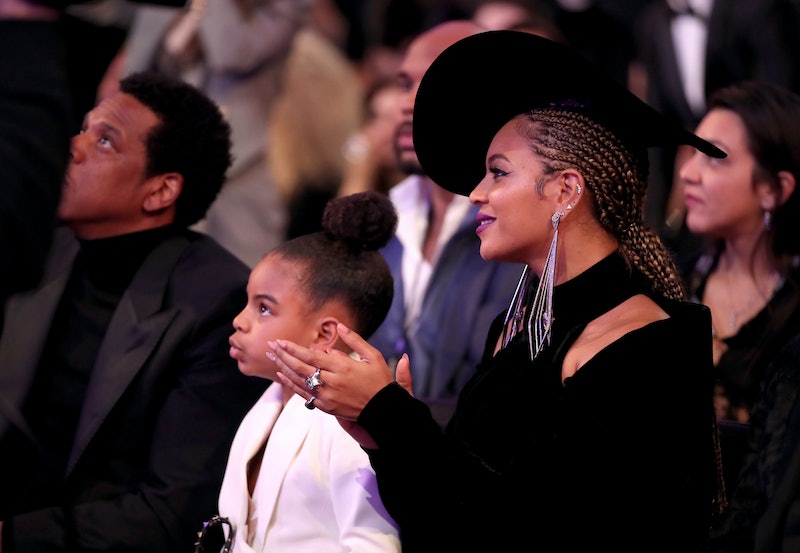 The anticipation for Disney's upcoming release of the live action version of The Lion King was just heightened by the voice of queen Nala herself. After attending mother Tina Knowles-Lawson's "A Journey to the Pride Lands"-themed Wearable Art Gala in Santa Monica, California, Beyoncé shared a video of daughter Blue Ivy channeling her inner lion cub. In the clip, the 7-year-old wore a perfectly on theme high-low yellow gown with puffy sleeves and a matching royal headpiece, while happily singing along to the movie's classic track, "Circle of Life."

Soon enough, she'll be singing a new version of the song featuring her mom and Childish Gambino (Donald Glover), who plays grown-up Simba in the CGI-version. The remake of the iconic cartoon opens in theaters on July 18.

The Wearable Art Gala is held annually by the Knowles-Larson family to benefit their Where Art Can Occur Theater Center. Tina's husband and co-host Richard Lawson told The Los Angeles Times that it's such a high-fashion event that it's often referred to as the "West Met" version of the New York City-based Met Gala. "Wearable art has to be over-the-top," Knowles-Lawson added. "It can't just be a dress with a little necklace. You’ve gotta really go there with it!" She continued, "This event takes people out of their usual comfort zones, and they really go all out."

And of course, that expectation did not exclude family members, which is why Beyoncé and Blue Ivy went the extra mile. Queen Bey channeled her lioness pride with a gilded beaded pantsuit and matching strappy heels designed by Georges Hobeika. The suit's upper half was adorned with a lion's head, its mane made up of dozens of glimmering spiky feathers that doubled as shape-shifting shoulder pads. Complete with an extravagant billowing cape, she was truly ready to lead the pack. Her Instagram post debuting her and Blue's looks included immaculate detailed shots of the whole ensemble.

Last year's event theme was inspired by the premiere of the Oscar-winning film Black Panther, which also brought Afrocentric looks, so the guests had to be up for the challenge to outdo themselves this year. "Think of the beautiful animals, the vivid landscapes and spectacular sunsets of Africa," Knowles-Lawson said in a statement for the event. "There are no limits!"

Her and Lawson's looks as king and queen of the jungle did not disappoint either. According to The Times, they collaborated with Beyoncé's regular stylist Timothy White to create their outfits. Knowles-Lawson wore a mermaid-shaped gown covered in grand black feathers, complete with an avant-garde one-shoulder piece, and Lawson wore a spin on a traditional garment inspired by African royalty.

The Oprah Winfrey Network will air a special detailing the entire event on June 11 at 10 p.m. ET. You'll want to tune in to see Queen Bey and Blue Ivy's looks in motion.

More like this
Beyoncé & Blue Ivy Performed A "Brown Skin Girl" Duet At Her Private Dubai Concert
By Brad Witter
Will Beyoncé Perform At Or Attend The 2023 Grammys?
By Jake Viswanath
Cardi B, Olivia Rodrigo & More Will Present At The 2023 Grammys
By Jake Viswanath
Beyoncé Just Announced Tour Dates: Here's How To Cuff Tickets To Her 2023 Shows
By Jake Viswanath
Get Even More From Bustle — Sign Up For The Newsletter
From hair trends to relationship advice, our daily newsletter has everything you need to sound like a person who’s on TikTok, even if you aren’t.