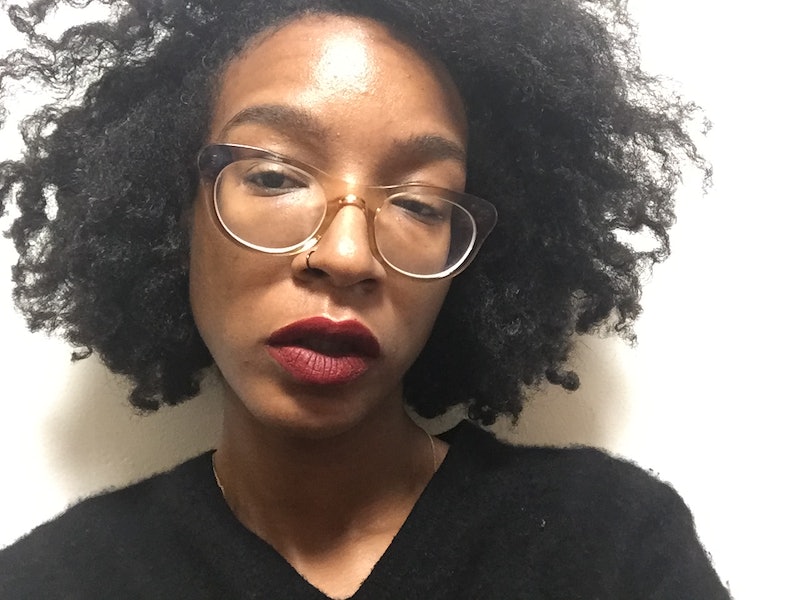 On Feb. 6, 2017, NPR published a study that showed there is still bias against afro-textured hair. A Cornell University professor who writes about beauty and race explained in the article that "for some reason, natural black hair just frightens some white people." I have seen salons, brands, and companies respond to the study by offering ways for black women to tame their natural hair to be more acceptable and that, to me, is just blasphemy. Let me channel the words of Marcus Garvey and say we should not be "[removing] the kinks from our hair — we should remove them from our mind."

For starters, the bias towards our kinks has very real, very damaging effects. For black people, our hair not only dictates how we are treated, but it limits essential opportunities like careers, housing, and justice. Yes, our skin color does that as well, but here's the thing about black hair: It's as fragile as it is misunderstood.

"Well, why can't you just wear your hair straight?" some of you might be asking.

Because it just doesn't grow that way.

Unfortunately, that question has inadvertently laid the framework for what hair styles are acceptable by not exposing everyone to the many shapes black hair can take and why it needs to take those shapes. If we don't talk about why the results of the study are showing bias towards our hair texture, then we may never correct it.

In 2007, Ashley Baker, a Glamour editor, spoke to a room full of female lawyers stating that afro-textured hairstyles, dreadlocks, and braids were Glamour "Don'ts" and according to this thorough report on Black Women & Identity, she allegedly came equipped with slides that had "Say No to the Fro." In 2010, an article about a friend being fired for her hair texture on Curly Nikki's blog was flooded by comments from others who had been fired for their natural hair. In 2012, meteorologist Rhonda Lee was fired for defending her right to wear her natural hair. In 2013, schools were still placing bans on afro-textured hairstyles, even historically black schools as mentioned in USA Today's article. In 2014, the Department of Defense issued hair guidelines banning afros, dreadlocks, braids, and twists over a quarter inch in diameter. In 2016, a woman was sent home from her serving job for wearing her natural hair. Later that year, a federal court ruled that firing an employee for wearing her hair in dreadlocks was not racial discrimination.

I've had colleagues compare hair guidelines to exposed tattoos in work dress codes, but they are hardly the same thing — I've had to cover both up in corporate roles. Unlike covering a tattoo or not being able to have funky nails, altering my hair exposes me to formaldehyde and highly alkaline formulas that studies have linked to fibroids in black American women who have consistently used relaxers. To straighten or make my hair more "acceptable" would expose me to CCCA (Centralcentrifugal cicatricial alopecia) also known as hot comb alopecia. To wear my hair in a neat crown braid every day or get tracks or extensions could lead to some traction alopecia. Frankly, I'm not sure why people with afro-textured hair should have to sacrifice healthy scalps for their jobs.

The fact is that racial bias towards black natural hair hasn't ever really gone away, and the Tignon Laws of the late 1800s have allowed us to put borders around our own cultural trends and styles specific to our hair.

So, after hundreds of years of hair guidelines, laws, and bans and not nearly enough discussion, the last decade has proven — along with the NPR study — that these racial biases exist and they are harmful. This NPR study does not need to be the end of the discussion, but merely the beginning of a long-overdue conversation about black hair and black beauty that is too often labeled unacceptable.

More like this
The Best Hairstyles From The 2023 Grammys
By Olivia Rose Rushing
How To Curl Your Hair With Leggings, According To TikTok
By Carolyn Steber
Indiyah's New Boots Beauty Box Is For Heartbreakers Everywhere
By El Hunt
An Honest Review Of BeautyTok's Beloved Sleepy Tie Hair Tool
By Rebecca Strong
Get Even More From Bustle — Sign Up For The Newsletter
From hair trends to relationship advice, our daily newsletter has everything you need to sound like a person who’s on TikTok, even if you aren’t.