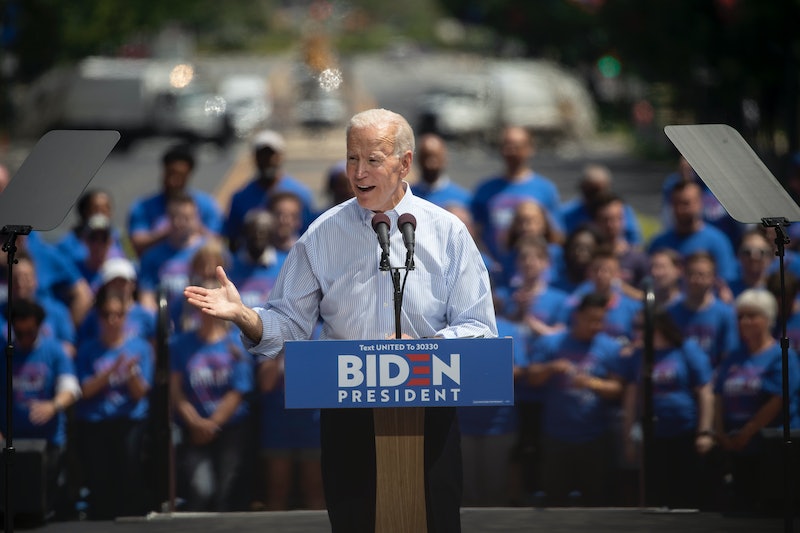 Speaking at a campaign rally in Pennsylvania on Saturday, former Vice President Joe Biden took a swing at the presumptive Republican nominee for the presidency in 2020. Imploring the audience to pay attention to "the facts," Biden said President Trump "inherited" a good economy, implying that the president should not be so quick to take credit for it. During his speech, Biden also tied Trump's boasts about the economy to his personal financial privilege, according to video footage of the rally shared by The Hill.

"I know President Trump likes to take credit for the economy and the economic growth and the low employment numbers," Biden said. "Just look at the facts, not the alternative facts. President Trump inherited an economy from Obama-Biden administration that was given to him — just like he inherited everything else in his life."

“I know how to make government work,” Biden said, according to the Journal. "Not because I’ve talked and tweeted about it, but because I’ve done it."

President Trump often tweets about the economy or mentions it during speeches. Oftentimes he credits his administration with bolstering it, or says that he is due credit.

"In the 'old days' if you were President and you had a good economy, you were basically immune from criticism," Trump tweeted in April. "Remember, 'It’s the economy stupid.' Today I have, as President, perhaps the greatest economy in history...and to the Mainstream Media, it means NOTHING. But it will!"

These were the kinds of messages Biden appeared to take issue with during his Saturday speech. But to be clear, while most Democratic candidates have avoided going against Trump directly, some have. Sen. Elizabeth Warren, for example, called for impeachment proceedings against Trump last month.

Biden and Trump — much like Trump and Warren — have long had a tense relationship. The president has criticized Biden many times, long before Biden formally launched his presidential campaign, dubbing the former VP "Sleepy Joe" on Twitter. But even so, Biden on Saturday stressed the importance of working together.

“I’ve worked across the aisle to reach consensus to make government work in the past," Biden said, according to The Washington Post. "I know how to go toe-to-toe with the GOP, but it doesn’t have to be and it can’t be that way on every single issue."

It's too early to say which Democratic candidate will ultimately earn the party's nomination. But the Democratic primary debates begin in just a few short weeks, and each presidential hopeful is doing what he or she can to convince voters that they are the best alternative to President Trump. Biden, for his part, has shown he is willing to take the president on by name.