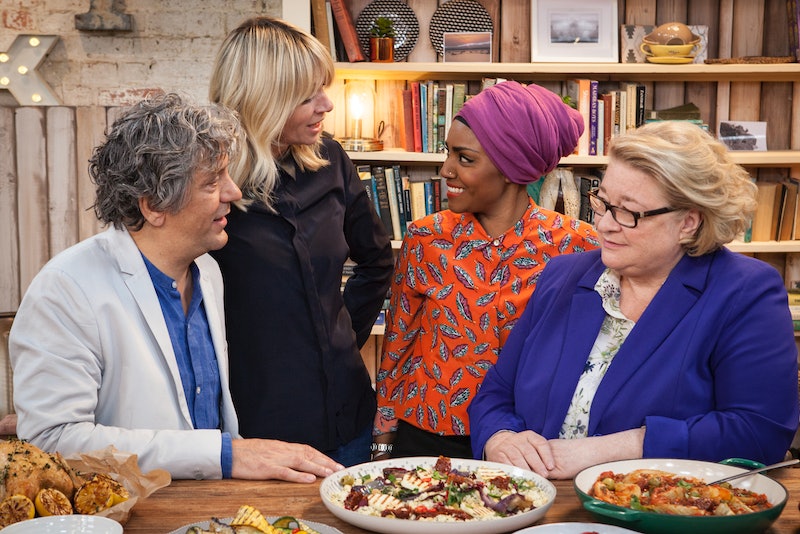 If you've ever found yourself watching a cooking show and dying to know exactly how you can recreate the chef's specialties in your own home, you're in luck. BBC provides a huge variety of Big Family Cooking Showdown recipes on its website, so when Season 2 hits Netflix this week, you'll have all the necessary information at your fingertips. The latest batch of episodes already aired in its entirety across the pond, so you'll have plenty of recipes from the families you're about to watch.

The British cooking competition features all different kinds of families as they show off their carefully crafted creations, hoping they'll be enough to solidify their team's place as the country's most skilled family of home cooks. And let me tell you — the resulting dishes sound divine. These may be home-cooked family staples, but they have the creativity and restaurant quality that could send anyone to the top of the competition.

For pasta lovers, Episode 1 kicks things off with a Moroccan lamb lasagna, complete with homemade noodles and a béchamel sauce. Seafood also abounds this season — Episode 3 features a twist on a classic fish and chips dish by coating cod in pistachio and matcha crumbs and serving with sweet potato fries. And just a few episodes later, another family presents baked Asian spring rolls filled with salmon and veggies.

Basically, the entire lineup sounds delicious, and I have no idea how the judges are going to determine who comes out on top. They're definitely qualified to determine each dish's value, though — Season 2 of the Big Family Cooking Showdown comes with a new team playing double duty as both hosts and judges.

According to the UK's Radio Times, Tommy Banks is the youngest chef to ever win a Michelin star, and TripAdvisor voted his restaurant, The Black Swan at Olstead, the best in the entire world in 2017. The other host, Angellica Bell, is a longtime staple of British TV, and won the last season of the UK's Celebrity MasterChef, per the same article.

American audiences are excited for the show to return after discovering it on Netflix — Eater's Greg Morabito even called Showdown's first season "one of Netflix's best-kept secrets." "Like [The Great British Bake Off], it features sweet people cooking their hearts out, kind-but-firm judges critiquing their work, and upbeat hosts highlighting the human drama unfolding in front of the camera," he wrote. "But what sets this show apart from its predecessor is the way that it celebrates the art and experience of home cooking."

Amateur cooks everywhere will no doubt rejoice when this new batch of episodes hits their streaming services, and maybe some families stateside will even be inspired to try their hand at recreating some of these newfound favorites.