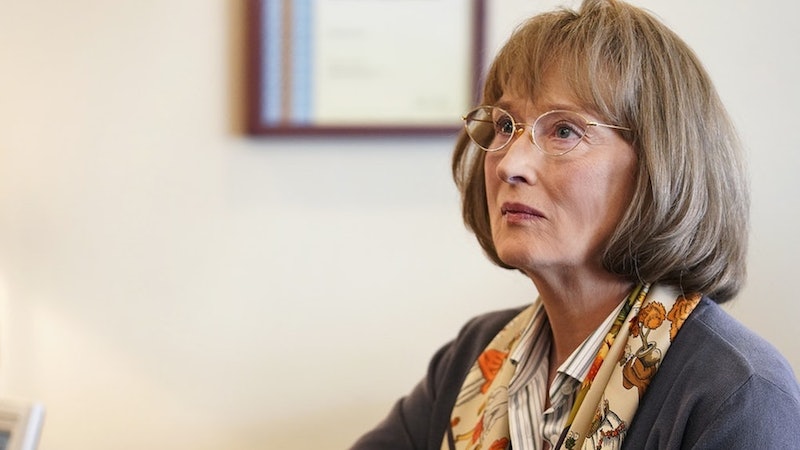 In a roundtable discussion that centered on the complexities of motherhood, Meryl Streep explained Mary Louise's frame of mind on Big Little Lies with some insightful comments about womanhood. In Season 2 of the HBO series, Streep joins the cast as Mary Louise Wright, the formidable mother of the deceased Perry (Alexander Skarsgård), who was pushed to his death in the Season 1 finale. At the roundtable discussion, Streep — joined by BLL co-stars Nicole Kidman, Reese Witherspoon, Shailene Woodley, Laura Dern, and Zoë Kravitz — poignantly touched on the "blame" that "women take on," and the tolls of Perry's "sins" on Mary Louise.

"One of the things I like about this piece is the blame delivered into Mary Louise's lap for the sins of her son. That is something that women take on, the blame, as a default setting," Streep said during the roundtable. "We imagine that not only our children's problems, but everything in the world, is our fault. I think it's sort of a more complicated landscape than that, and this piece enters into that very bravely."

The landscape is complicated, indeed. In Season 2, Mary Louise learns some hard truths about her deceased son, and, in turn, struggles with the idea that she birthed someone — as the matriarch said in Episode 3's “The End of the World" — "evil." In Episode 2's "Tell-Tale Hearts," Mary Louise grapples with the revelation that her son raped and fathered another son with Jane (Woodley), and was abusive to his wife Celeste (Kidman). In "The End of the World," Mary Louise — after asking Jane to submit her son to a paternity test, which she refused — comes to terms with the assault when she realizes Ziggy bares an uncanny resemblance to her late son, Raymond, who died as a child due to an accident.

It's a lot to take in. At the roundtable, Witherspoon explained that she hopes the "complicated landscape" put forth by Mary Louise "ignites conversations." She said at the roundtable, "Whether you agree or you don't agree with the judgments or the things that are said within the show, I hope it ignites conversations in living rooms and with other people to talk about, 'What is a mother responsible for? What is a mother's role?'"

Complex themes of motherhood extend well beyond Mary Louise on BLL. In the scenic beach town of Monterey, each of the Monterey Five moms are pretty much grappling with their own issues in terms of "blame." In Sunday's "The End of the World," for one, the "Medusa of Monterey" Renata (Dern) must deal with the fallout of her daughter Amabella’s panic attack. With the help of a child psychologist dressed as Little Bo Peep (is this show even real?), we learn that Amabella’s troubles stem from her dysfunctional family, and, of course, climate change.

During the roundtable discussion, Dern compared Renata and Mary Louise and the "scars" the women bare. "I was also very interested in… the humanity in both Renata and Mary Louise as perhaps the kinds of people whose scars are worn so close to the surface that it's almost hilarious and devastating at the same time,” she said. “And from one scene to the next, things could be comedic or flattening, and maybe that's a delicious reminder in life, too."

With Mary Louise coming to terms with Perry's violent tendencies and the Monterey Five unraveling from kept secrets, the second season is certainly proving to be delicious. Here's to more authentic storytelling centered on complex women.