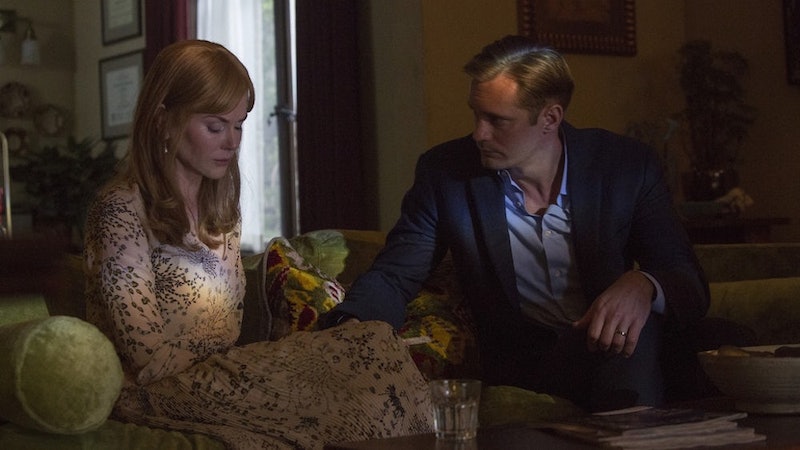 Spoilers ahead for Big Little Lies Season 2, Episode 2. Perhaps Mary Louise has some unsurfaced secrets of her own. At least, this much was teased by Alexander Skarsgård ⁠— who depicted Celeste’s abusive husband Perry in the first season ⁠— during a recent interview with the Hollywood Reporter. In the interview, Skarsgård revealed that Big Little Lies Season 2 will explore Perry’s relationship with his mom, Mary Louise (Meryl Streep), in greater depth. At the end of Season 1, Perry is revealed to be Jane’s (Shailene Woodley) rapist and father of her son, Ziggy. Now, even after his death, the abuser’s presence is still very much prevalent in the follow-up season. With his return to Season 2 through a series of flashbacks, Skarsgård explained that viewers will get a better sense of Perry’s upbringing.

"There’s more to Perry’s backstory in season two. You understand his relationship with his mother and what he went through as a kid,” Skarsgård told the Hollywood Reporter. “And it explains a bit more about how he ended up in this really dark place and with those violent characteristics."

Episode 2, titled “Tell-Tale Hearts,” concluded with Mary Louise learning some difficult truths about her deceased son. In the episode, the formidable matriarch learns that Perry fathered another child through sexual assault, and that her son possessed a violent relationship with his wife. Still, she refuses to believe that her son could be capable of such actions. With a stern voice, she lets it be known to Celeste that she simply isn’t buying the facts presented. “You left some things out, didn't you? The fact that he fathered another child, you left that out," she says in the episode. "That you planned to move, that you rented an apartment, you left that out. You were planning to leave him the very night that he died, you left that out. And that you learned of his infidelity just 10 seconds before he went falling down a flight of stairs to his death. Oh, you left that out, too."

In a preview for the coming weeks, Mary Louise is seen at the police station questioning the suspicious circumstances surrounding her son’s death. According to Skarsgård, fans can expect Mary Louise to go to great lengths to unearth the truth about her son. “Liane [Moriarty], who wrote the novel, and David [E. Kelley], who wrote the script, came up with something really interesting and creative with that drama of dropping her in the mix," he teased to THR. “Mary Louise doesn't quite buy their story the same way the cops buy it and starts to ask questions. And she’s still family. She’s the grandmother of Celeste’s kids, and she lives in the house with them. The build-up of that tension is wonderful."

The first two episodes of Season 2 alone have managed to masterfully weave Celeste and Perry flashbacks into current day. In these recollections, Celeste remembers the good and the bad times with her abusive husband — ranging from their very first date to more violent altercations. The flashbacks offer a nuanced perspective on the complicated tolls of abuse endured by survivors — and this is something Skarsgård recognizes.

"It’s a continuation of season one where you see the complexity of the relationship… It’s not like, 'Oh good, the villain is gone. I’m great and just moving on with my life,'” he said of the flashbacks. “Of course there are memories and aspects of his personality that she misses and then that creates guilt, because you miss someone you really shouldn’t miss. You should be relieved from a guy who tormented you and want to move on. But it gives it a depth and complexity.”

Given these flashbacks and Mary Louise's arrival in Monterey, BLL Season 2 makes it clear that this isn't the last viewers will see of Perry.

More like this
Every Horror Movie Reference In The 'PLL: Original Sin' Premiere
By Alyssa Lapid
Here’s Why 'Pretty Little Liars: Original Sin' Season 2 “Won’t Be The Same”
By Kadin Burnett
Shital Dropped Major Hints About Her Relationship With Niraj After 'Indian Matchmaking'
By Brad Witter
Louise & Mercedes’ Relationship Is “A Little On And Off” After 'FBoy Island'
By Kadin Burnett
Get Even More From Bustle — Sign Up For The Newsletter