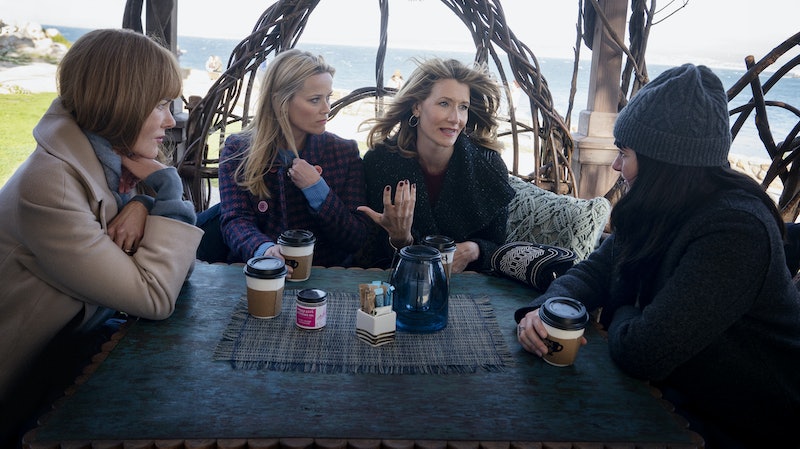 If you hunker down on your couch with a nice big glass of merlot every Sunday night, ready to see what the Monterrey Five have up their sleeves, then you might want to brace yourself. It turns out that Season 2 might very well be the last time you ever check in with Celeste, Madeline, Jane, Bonnie, and Renata. According to HBO president, Casey Bloys, Big Little Lies Season 3 probably won't happen. In fact, Bloys called the idea "not realistic," meaning that all the drama built up from the past season and a half will have come to an end in the Season 2 finale. Well, it's possible they'll end the season on a cliffhanger anyways. But whatever they do, it seems like the chances for another season are very slim.

In an interview with TVLine, Bloys expressed that, despite the fact that they've already deviated from the novel the show was based off of with Season 2, there might still be more story to be told. However, the real reason Season 3 might not happen is because of the scheduling conflicts of the show's A-list stars. "I love this group of people — I would do anything with them. But the reality is, they are some of the busiest actresses working in Hollywood," he said. "We have deals with some of them — Nicole [Kidman] is doing her next show [The Undoing] with us. I just think it’s not realistic."

There's no question that the Big Little Lies cast is beyond stacked with Kidman, Reese Witherspoon, Laura Dern, Shailene Woodley, Zoe Kravitz, and now Meryl Streep starring. All are highly in demand actors, with more than a a few dozen Oscar nominations between them, and no doubt they have other roles that would conflict with doing another seven episode shoot.

As you'd imagine, Season 2 faced a similar hurdle, but luckily they were able to pull through, giving fans a brand new ending to satisfy them. That is, according to Boyle, who promised, “Season 2 was a chance for everyone involved to end [the franchise] in a way that feels satisfying.” That doesn't necessarily mean it'll be a happy ending, of course. They are still in Monterrey, where bad things always seem to happen, especially to this group of high-end moms.

As TVGuide also reported, Bloys talked to Vulture in 2017 and said a similar message about why future seasons were not guaranteed. "Everybody is too busy; Reese and Nicole have too many things going on," he said. "Everybody involved is at the top of their game doing other things. Nobody had to do this, so every part had to feel right." Again, luckily it came back for fans, but it does sound like this next finale truly might be its last.

However, not all hope for a Big Little Lies Season 3 is lost. If all the actors wanted to do more, and managed to find the time, the HBO President said the network would gladly keep making the show. “Look, if they all came to me and said, ‘We worked out all of our schedules!’ – then sure,” Bloys added with a laugh. “But I just don’t think it’s realistic.”

The door to more seasons of Big Little Lies is still open, but fans might want to start preparing to say goodbye to the Monterey Five. It's the realistic thing to do.