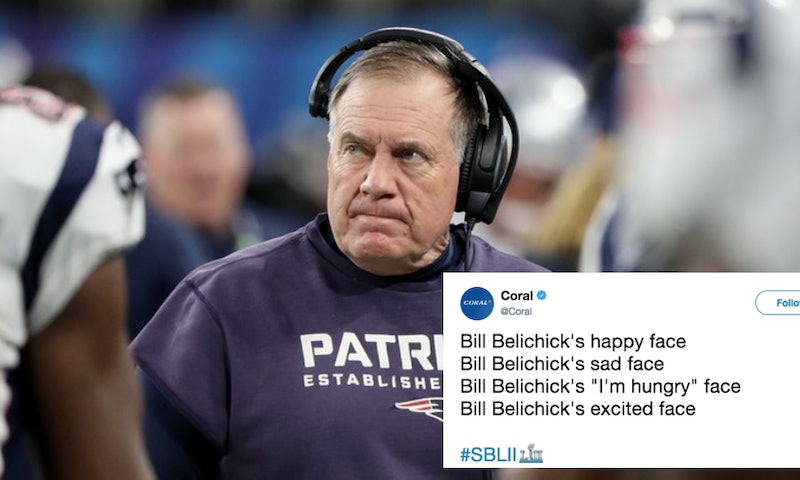 After the month of eleventy-million days, also know as January, February is bringing two epic sporting events. While the Winter Olympics 2018 Opening Ceremony will begin Friday, Feb. 9, the Super Bowl 2018 between the Patriots and the Eagles is finally here. And, these Bill Belichick Super Bowl 2018 memes will keep you going all through the big game. Belichick, the coach for the New England Patriots, is the only NFL coach to lead his team to three Super Bowl victories in a four-year span, according to the Patriots' website.

While he is known for his brevity, he is also known for being rather expressive on the sidelines, which has resulted in some hilarious memes. In June of 2017, during the Patriots' training camp, Belichick's raincoat hood drew comparisons between him and dark side Star Wars anti-heroes. "Sheev Palpatine, a Sith Lord from the Star Wars movies otherwise known as The Emperor or Darth Sidious, quickly became a go-to reference," the Boston Globe reported.

And, the meme making has continued leading up to Super Bowl 2018 in Minnesota, because no matter which team you are rooting for, memes make everything better. And, Belichick is often a meme target for everything from Star Wars to football to holiday angst. In 2015, USA Today detailed a meme featuring a stern-faced Belichick that went viral and became a symbol for holiday haters.

If you need more Belichick in your life for the Super Bowl 2018, these memes leading up to the Super Bowl have got you covered. He may keep a pretty unreadable face most of the time, but dang — it's also Twitter meme gold.

1. Replace This Phrase With "You talkin' to me?"

So joyful. So full of cheer.

2. Warns He Will Take Eagles To The Death Star

It's sort of easy to see how the (extremely accurate) Star Wars comparisons came to be. (Are you frightened? I'm frightened.)

4. Dress For The Occasion

It's not very often you'll see Belichick in a suit — so when you do it's kind of a big deal.

This is what happens when you ask Bill Belichick for tickets to the Super Bowl (spoiler: it's awkward).

6. The Many Faces Of Bill Belichick

He wears his heart on his sleeve.

If this is what Belichick looks like when he's fired up, I would hate to see him when he is really starting to feel the adrenaline.

Who would win in a fight: Eleven, or Bill Belichick? The world will never know.

Another stunning example of Bill Belichick's epic and enthusiastic facial expressions. He can *hardly contain* his excitement.

It's possible this is *the* most unsettling door knocker of all time, but Patriots fans are known for their devotion. I wonder if there's a Tom Brady one to match?

Belichick managed to maintain a remarkably cool mask during the entire game — which is what makes this meme so funny. You can't win them all, I guess.

As is to be expected, it doesn't matter so much what happens during the game as long as there are memes a'plenty to keep you occupied the entire time players are on the field. And when you have someone like Patriots coach Bill Belichick on the sidelines? Well, those memes aren't difficult to find in the least. No matter who you are rooting for, these memes are beyond satisfying.