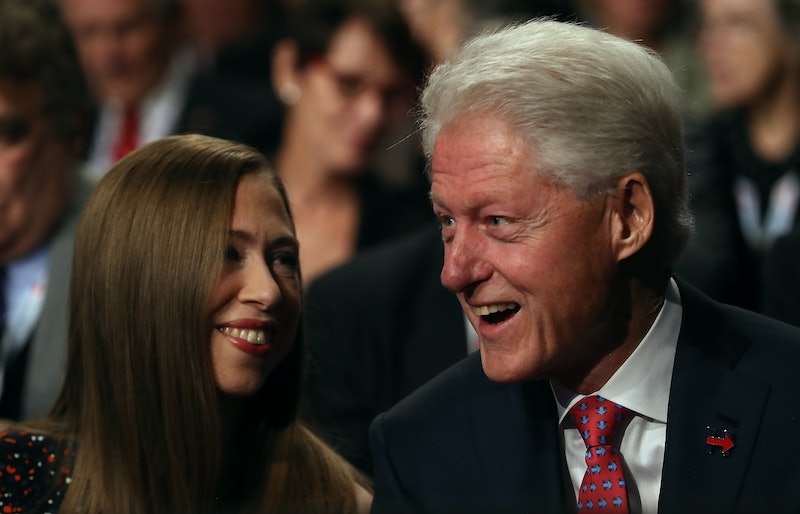 Yet another podcast series is on its way to Apple's iTunes platform this summer. According to The Hill on Thursday, Bill and Chelsea Clinton will launch a podcast titled "Why Am I Telling You This." The father-daughter duo plan to discuss a variety of topics on their show, including "people, issues, and events that shape our work and our world," Chelsea said, per The Hill.

In fact, a teaser clip for the Clintons' podcast is already up on Apple's iTunes. The recording is only about two minutes long, but it gives listeners a chance to understand the purpose of the show and even the reference in the series' title. If you ever kept an ear open for Bill's political speeches, you may have noticed that the former president had a habit of frequently saying, "Why am I telling you this?" It was a rhetorical move that Bill would often use to connect an issue with a story, event, person, and more.

In the teaser preview for "Why Am I Telling You This," Bill said, "Growing up in Arkansas just after World War II in a family that didn't have a lot of money, most of our entertainment revolved around storytelling. Listening to my relatives and neighbors tell stories showed me that everyone has a story and that everyone's story has value."

In the preview for “Why Am I Telling You This,” the former president goes on to say, “When I got into politics, I always thought that the main point of my work was to give people a chance to have better stories. And after I left office, that's the same purpose that led me to start the Clinton Foundation." In addition to Bill and Chelsea, employees in the Clinton Foundation will also appear on the upcoming show, MEAWW reported.

A spokesman for the Clinton Foundation, Craig Minassian, told the website that the podcast will feature special guests like former United States Surgeon General Vivek Murthy and celebrity chef Jose Andres that will reflect on world issues with the hosts. According to the Clinton Foundation's announcement, the podcast will focus "on global leadership, reflections on the Clinton Administration, and President Clinton’s wide range of interests and well-known intellectual curiosity," Variety reported.

In comments to MEAWW, Minassian said that that former Secretary of State Hillary Clinton is expected to make the occasional appearance on the podcast but won’t be a regular voice.

For Bill, who is also a two-time Grammy Award winner for Best Spoken Word Album, storytelling seems to come naturally. In remarks to MEAWW, Minassian also pointed to the former president's knack for talking. The podcast is, according to Minassian, a "natural extension of President Clinton's mastery of using storytelling to explain complex issues and his belief that once you know someone's story, you better understand them as a person and your differences become less important."

"President Clinton and Chelsea Clinton have always sought new ways to create a deeper understanding of how to make an impact and improve lives which is particularly important and challenging in the current environment," the Clinton Foundation spokesman added.