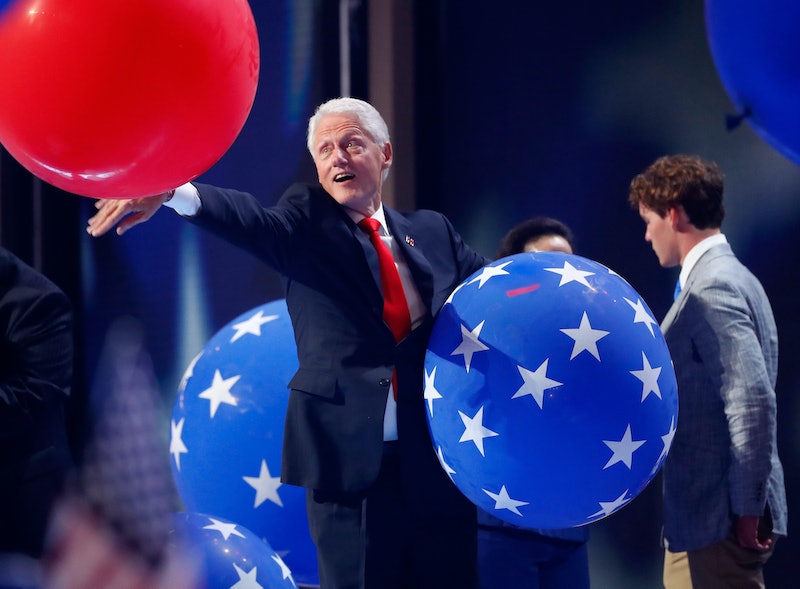 On Friday, President Obama's 56th birthday, Bill Clinton wished his successor a happy birthday in a tweet that professed his love for balloons. "Happy Birthday @BarackObama!" the tweet read. "Hope you get some balloons. I love a good balloon."

You may recall the 42nd president displaying his true love for inflated rubber and air at the Democratic National Convention. Because what excitement is there left for you once you've negotiated a cease-fire during the siege of Sarajevo or the release of two Americans imprisoned in North Korea besides the true, pure joy of balloons?

Clinton and Obama didn't start out close — back in 2008, when Obama surprised everyone by not only running against Hillary Clinton but winning, Bill memorably referred to the future president's candidacy as a "fairy tale," in advance of the South Carolina primary, in comments that were seen by many as racially charged. He consistently fought back against Obama's candidacy throughout the campaign.

But the two later patched things up smoothly. Clinton endorsed Obama at the 2008 Democratic National Convention, and after Obama won, he appointed Hillary to secretary of state, suggesting that whatever ill will the families had felt after the 2008 campaign was patched up quickly.

By the end of Obama's first term, Clinton had become a full-on Obama booster, delivering one of the most memorable speeches of the 2012 Democratic Convention, touting Obama's record.

"If you want every American to vote and you think it is wrong to change voting procedures just to reduce the turnout of younger, poorer, minority and disabled voters, you should support Barack Obama," Clinton boomed in that speech. "And if you think — if you think the president was right to open the doors of American opportunity to all those young immigrants brought here when they were young so they can serve in the military or go to college, you must vote for Barack Obama."

But as much as Clinton may have proven his love for Obama over the years, as his happy birthday tweet proves, his true love, more than any other president or a balanced federal budget, remains balloons.

Because what else do you offer for the birthday of a man who for eight years, had all the gold in Fort Knox, an indestructible limousine, and command of the U.S. military, if not balloons?

Obama is reportedly spending his birthday with his family in Martha's Vineyard, according to the Martha's Vineyard Times. The Obamas frequently vacationed at the Massachusetts island during their years in the White House, though it will presumably be a smaller affair than when the capability to launch nuclear weapons came with him. As of press time, no information about potential balloons has been confirmed.