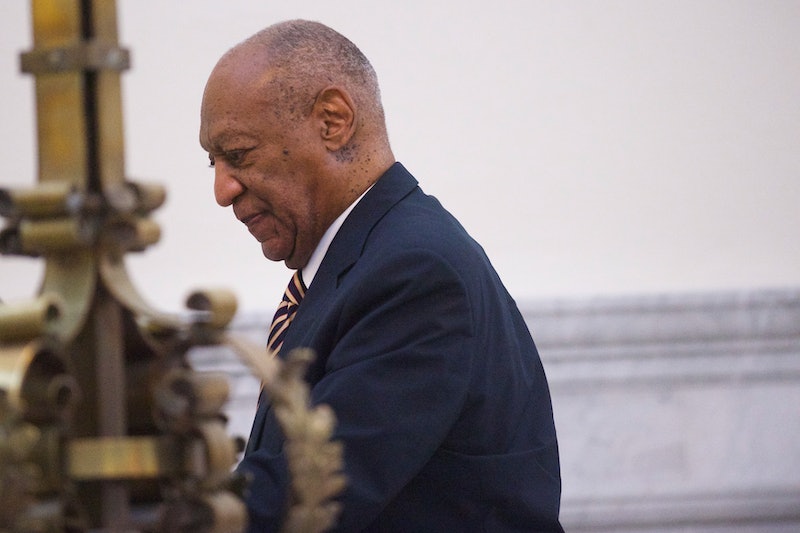 Judge O'Neill's declaration of a mistrial in Bill Cosby's sexual assault case dealt a devastating blow to the nearly 60 women who have alleged sexual misconduct charges against him (all of which he has vehemently denied). But in statements following the announcement, Cosby's accusers reacted to the mistrial with disappointment, but they were not without a sense of determination and hope.

"Rehearing testimony in this case is re-victimization for everyone that's been the victim of sexual assault and rape," said Linda Kirkpatrick, who accused Cosby of sexually assaulting her in 1981, to CNN. "It's painful. It's raw. It's real. We're not actors. We're real life people. This is our lives." She added that she still feels "incredibly hopeful" after hearing the district attorney's statement confirming that the case will be retried.

Kirkpatrick additionally touched on the subject of rape culture in America. “He thought he could bury us. He didn’t know we were seeds," she said. "We are sprouting up. We are looking for reform. Uncovering rape culture in this country where victims are blamed and shamed.”

Jewell Allison, who alleges that Cosby drugged and assaulted her in the late '80s, had a spiritual response to the case's outcome. “I don’t think it’s a coincidence that we came out here and I’m hearing church bells,” she said. “I think God is watching all of us.”

She further suggested that, while Cosby is a free man in the legal sense, he is trapped in a self-made prison. “He walked out but the bars were all around him,” she said. “He’s mobile, but the jail goes with him wherever he goes. I’m praying for his salvation. He can come to my church anytime. We’ll dip him in the water.”

Cindra Ladd, another of Cosby's accusers, appeared to share Allison's view of the actor's self-made prison, though offering no sense of forgiveness. "Bill Cosby has already been exposed as a predator who hid behind his jovial mask for more than 50 years and no jury verdict will ever change that," she said. "Despite the disappointing outcome of this case, I take comfort knowing that Bill Cosby's life is now, and forever will be, a living hell."

Victoria Valentino, who alleges that she was drugged and raped by Cosby in 1969, responded to the news with a mixture of sadness and determination. "We’re devastated, but the work goes on,” she said. “A woman’s worth was on trial these past two weeks. Society has failed [Andrea Constand] and has failed us.”

Another accuser, Beth Ferrier, expressed similar determination. “Round two — that’s all I can say,” she said. “Cosby’s own words: Far from Finished. That was the name of his own [comedy] tour. He’s messed around with the wrong ladies this time. Like anything in this world, things that are worth the wait, we have to continue to push forward.”

Cosby's wife, Camille, released a statement sharply criticizing the district attorney, the judge, the accusers, and the accusers' legal teams. In response, Kristina Ruehli, who claims that Cosby drugged and attempted to sexually assault her in 1965, released her own statement. "I am particularly nauseated by the statement by Camille Cosby," she said. "The vitriol in it to me was over the top considering that 60 accusers came forward and Cosby was not found innocent."

More of the long list of women who've accused Cosby of sexual assault are sure to react to the mistrial in the upcoming days. Cosby continues to deny all claims of sexual misconduct. If the current responses are any indication, the motivation to see legal action against Cosby has been far from weakened.