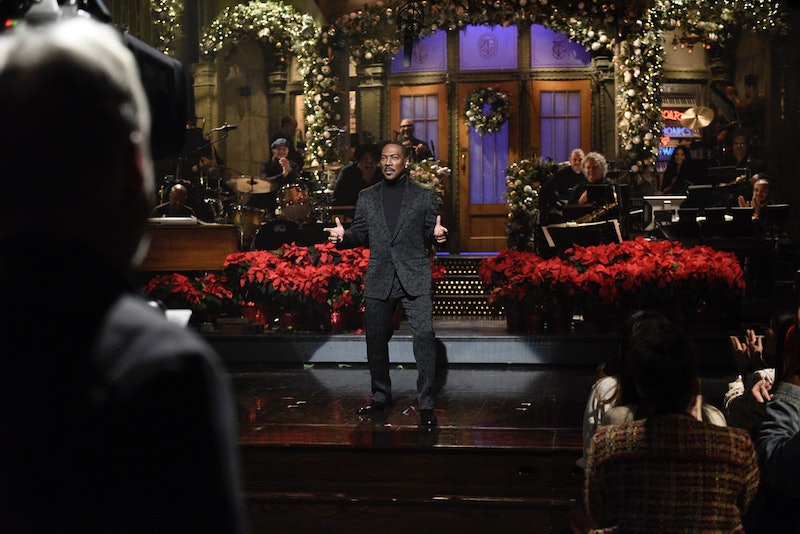 Many viewers were overjoyed to see Eddie Murphy's return to Saturday Night Live, but there was one person who didn't find the comedian's opening monologue all that amusing. Murphy mocked Bill Cosby on SNL at the beginning of the show and Cosby has a few choice words about being made the butt of Murphy's joke. Needless to say, he didn't care for it, and his response on the matter is, well, quite something.

The joke in question took place during Murphy's opening monologue when the actor said, "“If you would have told me 30 years ago that I would be this boring stay-at-home house dad and Bill Cosby would be in jail, even I wouldn’t have took that bet.” Murphy then proceeded to imitate Cosby’s character from The Cosby Show, Cliff Huxtable, joking: “Who is America’s Dad now?” This prompted Cosby's spokesman Andrew Wyatt to take to the former comedian's official social media account on Sunday and slam Murphy for his remarks, even going so far as to call him a "Hollywood slave."

“Mr. Cosby broke color barriers in the Entertainment Industry, so that Blacks like Eddie Murphy, Dave Chappelle, Kevin Hart and et al., could have an opportunity to showcase their talents for many generations to come,” the statement reads. “It is sad that Mr. Murphy would take this glorious moment of returning to SNL and make disparaging remarks against Mr. Cosby."

The statement continued, "One would think that Mr. Murphy was given his freedom to leave the plantation, so that he could make his own decisions; but he decided to sell himself back to being a Hollywood Slave.”

Wyatt ended the statement by asking Murphy to attend a "meeting of the minds" with him and Cosby in order to find a way to use their elevated platforms to "enhance Black people rather than bringing all of us down together."

Unfortunately for Cosby, he is in absolutely no position to claim any sort of moral high ground. Back in September 2018, Cosby was sentenced to three to 10 years in a state prison for drugging and sexually assaulting Andrea Constand at his home 14 years ago, as per CNN. Cosby denied the accusations with Wyatt calling the prosecution "the most racist and sexist trial in the history of the United States." The disgraced comedian, meanwhile, has been accused of sexual assault by dozens of women, though he denies any wrongdoing.

Meanwhile, Muphy's presence on SNL proved to be ratings gold for the series, and the actor is already enjoying quite a bit of Oscar buzz for his role in Netflix's Dolemite Is My Name. Moreover, many fans have taken his dig at Cosby to be a callback to his 1987 concert film Edie Murphy Raw, in which he described Cosby saying he was a bad influence. Clearly, when it comes to comparing reputations, the joke is still on Cosby.