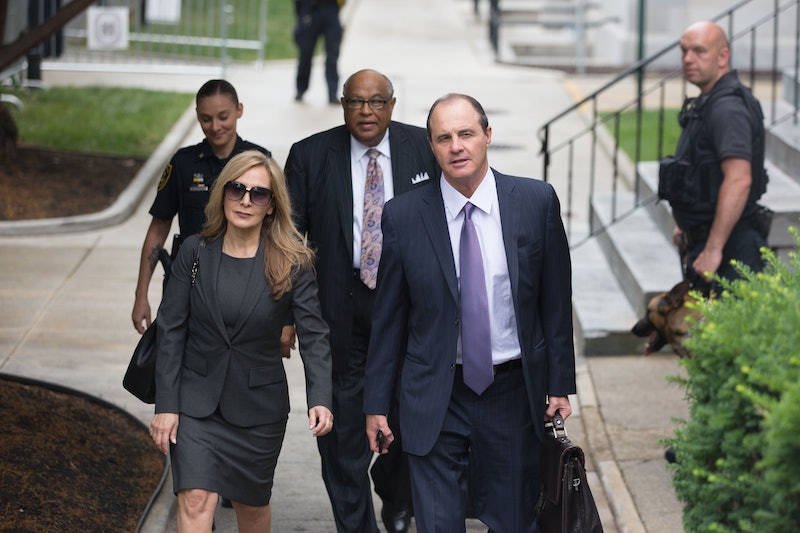 Shortly after the Bill Cosby trial ended with the jury unable to reach a unanimous decision, Cosby's lawyer Brian McMonagle reacted to the mistrial result declaring "justice is real." Cosby team gave brief statements to the press, and all of them seemed to be satisfied with the result of the trial.

Each person who spoke — his publicist, McMonagle, and his other attorney —thanked the jury and the court system for all of their hard work, saying that justice had been delivered in the case. "This is what happens," said the first member of Cosby's legal team to speak, Angela Agrusa, going on to discuss her view on the evidence presented to the jury.

"Juries are stuck, when a prosecutor seeks to put someone in prison for things that are simply not presented in the courtroom. And the jury stuck to what they were asked to do, and that is to review the evidence before them, and there simply wasn't enough, and we are grateful for the time that they put into it."

McMonagle also started by thanking the court and specifically the jury for their work. "This court system was tremendous," he said. "The judge was right. Justice is real, it lives here in Montgomery County." McMonagle acknowledged that a mistrial wasn't what they were aiming for in the case, but that it was a satisfactory result. "We came here looking for an acquittal," he said, "But like that Rolling Stones song says, you don't always get what you want, sometimes you get what you need."

The attorneys kept their remarks very brief and did not take any questions from the press. Mr. Cosby stood behind them while they were speaking, but did not say anything himself. In their discussions of the jury's deliberation and their thanks to the legal system, Cosby's legal team also did not address the news that the prosecutors have promised to retry the case. They kept their remarks positive, as the result was at least in some way a victory — the mistrial result, while not being a full acquittal, does mean that Cosby can avoid the potential jail time that he might otherwise have been facing. As it stands right now, the prosecution has stated that they have a year to retry the case, but that they would like to push things forward sooner.

More like this
Where Is Allan Gore Now? The ‘Candy’ Subject Moved On Shortly After Betty’s Death
By Gretchen Smail
How The City Healed Five Years On From The Manchester Arena Attack
By Ella Glover
Michael Peterson & Sophie Brunet’s Relationship Timeline
By Morgan Leigh Davies
9 Honestly Unbelievable Revelations From The WAGatha Christie Trial
By Frances Stewart
Get Even More From Bustle — Sign Up For The Newsletter