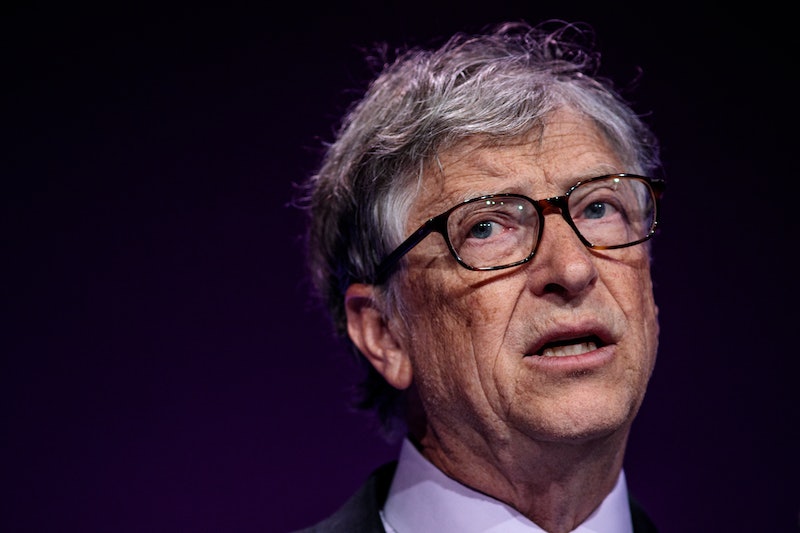 As for the list of women with whom President Donald Trump reportedly has a slightly creepy relationship, we can now add the daughter of one of the richest men in the world. At a recent Bill & Melinda Gates Foundation meeting that was broadcasted by MSNBC on Thursday, Bill Gates said Trump's knowledge of his daughter's appearance was "scary[ily]" detailed when the billionaires met. He also described Trump's bizarre first encounter with the 22-year-old Jennifer Gates.

According to her father, Trump ran into Jennifer Gates at a Florida horse show (it's unclear what year this happened, though the occasion might have been an equestrian event at Mar-a-Lago in 2015). He left the event shortly afterward, apparently to be able to reenter more dramatically.

"Like 20 minutes later he flew in on a helicopter to the same place," Bill Gates explained. "So clearly he had been driven away but he wanted to make a grand entrance in a helicopter." As Gates tells it, Trump's meeting with Jennifer Gates that day seems to have been harmless, if a bit strange. "He went up and talked to Jen and was being super nice," he said.

In addition to being a full-time college student, Jennifer Gates is a professional horse show jumper who competes regularly. Last year, she was ranked ninth in the nation in the North American Western Sub-League. According to her bio on Global Champions, she's been horseback riding since she was 6 years old.

Bill Gates also recalled his own introduction to Trump, which happened shortly before the inauguration. The two met in December 2016 and discussed clean energy investment. "When I first talked to him, it was actually kind of scary how much he knew about my daughter's appearance," Gates said in a lighthearted manner at the foundation meeting. The crowd chuckled. Referring to his wife, he added: "Melinda didn't like that too well."

Jennifer Gates is the oldest of Gates' kids (he also has a son and another daughter, Rory and Phoebe). She's currently majoring in human biology at Stanford University.

Bill Gates had fairly positive things to say about his meeting with Trump at the time it occurred. He told CNBC afterward that he believed Trump had the ability to encourage American innovation. He said he thought that the president might "get rid of regulatory barriers" and better "organize things" in the economy. He even compared Trump to President John F. Kennedy.

Gates is a liberal and often donates money to Democratic candidates, though he is wary about some types of government intervention in the economy. He opposed the GOP tax plan and has criticized Trump's attempts to cut back on the United States' foreign aid.

Gates said that he met with the president again in March 2017 and that both times Trump asked him about the difference between HIV, or human immunodeficiency virus, and HPV, or human papilloma virus. HIV handicaps the immune system and can lead to AIDs; HPV is a common sexually transmitted infection that can cause warts.

"I was able to explain that those are rarely confused with each other," Gates told the crowd, to some laughs.

Tara Dowdell spoke with MSNBC's Chris Hayes about the Bill Gates footage after it aired, reports The Guardian. "We're looking at a president that doesn't know the difference between HIV and HPV, but he has memorized Bill Gates’ daughter’s appearance," she said. "So if he spent more time actually learning policy — if he devoted just a quarter of the time that he devotes to harassing women and gawking at women to actual policy, memorizing and learning policy — I think the country would be a lot better off."

More like this
Michael Owen Has Shared His Thoughts On Luca & Gemma
By Bustle UK
Are John Legend & Kanye West Still Friends? The Singer’s Latest Update Is Candid
By Brad Witter
Christina Aguilera Took A Powerful Stand At Brighton Pride
By Sam Ramsden
'Scream’s Courteney Cox Has Broken A Major Horror Record
By Sophie McEvoy
Get Even More From Bustle — Sign Up For The Newsletter