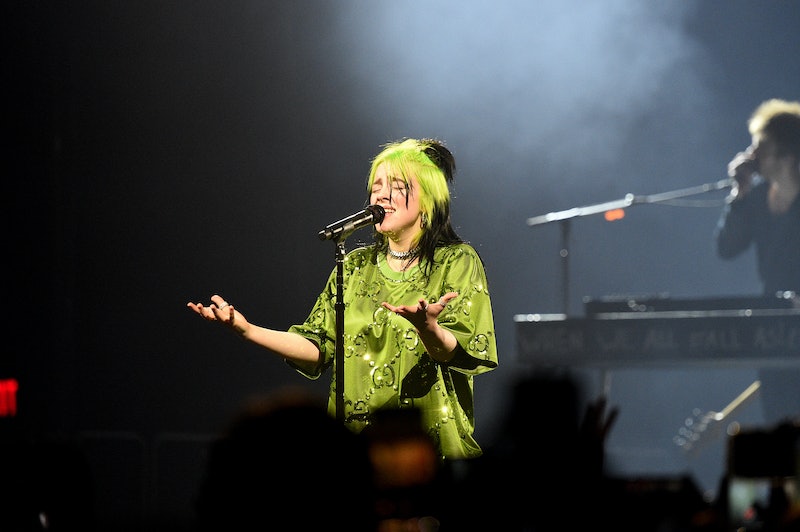 Billie Eilish made history at the 2020 Grammy Awards, taking home five trophies, including four wins in the major general categories like the coveted Album of the Year prize. But, looking back, she also understands why some people weren't happy with her wins. Billie Eilish gets why people say she won her Grammys because she's white, as she told British GQ in a new interview published on Saturday, June 6.

In the interview, which actually took place just a few days after the Grammys on Sunday, January 26, Eilish was asked about Tyler, the Creator's comments on how taking home Best Rap Album at the Grammys felt like a backhanded win. "It sucks that whenever we — and I mean guys that look like me — do anything that's genre-bending or that's anything they always put it in a rap or urban category," he said at the time. "I don't like that 'urban' word — it's just a politically correct way to say the n-word to me."

Eilish echoed Tyler's sentiment, conceding that she didn't like how the Grammys divided categories by genre. “It was such a cool thing Tyler said," she said. "Don’t judge an artist off the way someone looks or the way someone dresses." She argued that she can see how her race might have categorized her music as pop, which allowed her to win the big categories. "There's the other side of this whole thing: people sh*tting on me because I am white. 'Oh, she's white, that's why she won'," she explained. "You know what? I agree with the sentiment; I get why people say that."

"Look, if I wasn’t white I would probably be in ‘rap’. Why?," she continued. "They just judge from what you look like and what they know. I think that is weird. The world wants to put you into a box; I’ve had it my whole career. Just because I am a white teenage female, I am pop. Where am I pop? What part of my music sounds like pop?"

Eilish has already expressed that she felt "embarrassed" for winning so many Grammys that night, telling Dazed in a separate interview that she felt other nominated artists were more deserving. "I was dead surprised, and I was embarrassed, dude," she said. "I was in front of Ariana Grande and Lana Del Rey and f*ckin' Beyoncé is nominated, and I win. I was like, noooo... I don't deserve it. They deserve it." Now, she's calling attention to a double standard in how the music industry often labels artists' genres by race, one that needs to be addressed and fixed on major platforms like the Grammys.