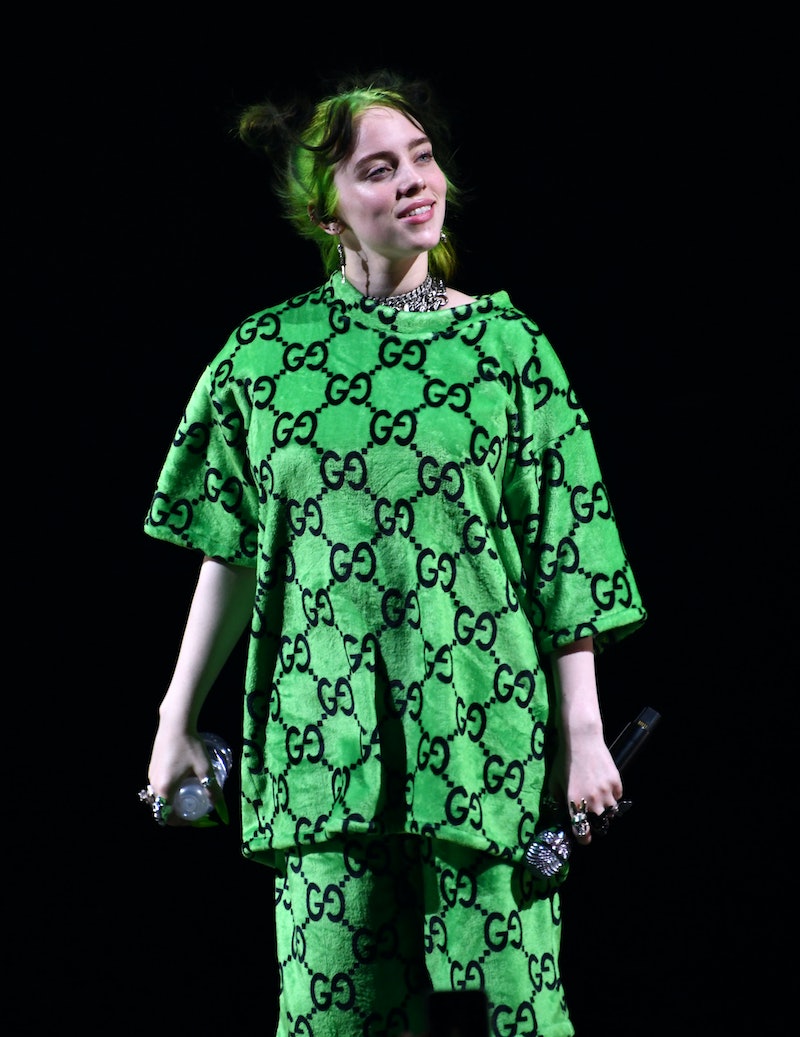 Billie Eilish has a known signature style. From her oversized matching tees and shorts to massive parkas and sweats, the baggy look that the singer often rocks has become part of her aesthetic — but it may change. According to an interview with Elle, Billie Eilish wants to change her style and image when she turns 18. And that could bring some new fashion to her wardrobe.

When Eilish sat down with Elle for her Women In Music cover shoot, the star explained that her current style may not be forever. The "Bad Guy" singer turns 18 in December, and she says that marks a time in her evolution where she may decide to show off more of her body.

Eilish is clearly aware of the unwarranted criticism that could come with a shift in her style to something more sexy and less in line with her iconic baggy look. However, she's also aware of the fact that no matter what she does there will always be criticism.

In the same interview, Eilish goes on to tell the story of a comment that was posted under one of her videos that read, "Tomboys always end up being the biggest whores." The quote came because Eilish just happened to touch her breasts in the video on accident. "I can't win," she says in the interview.

Eilish's discussion of changing her style isn't the first time she's addressed her signature look. In May, she participated in a campaign with Calvin Klein called “I Speak My Truth In #MyCalvins" where she revealed the reason behind the look. In a video for the brand, Eilish says that her baggy clothes are a way of not letting people know everything about her. The style prevents people from making comments on her body because they don't know what's underneath those oversized layers.

Fast forward a little over a month to June, and the exact thing Eilish spoke about in her Calvins ad happened. The singer was snapped wearing a simple, ribbed white tank top, and the internet exploded with people making comments on her breasts. In fact, it's a moment she also mentions in her Elle interview, explaining that her boobs began trending in the top spot on Twitter and that these moments are why she chooses to dress as she does.

Of course, if Eilish does decide to change her style when she hits 18, she has every right to do so and wouldn't be the first celebrity to make the change. Former Disney stars like Miley Cyrus, Selena Gomez, and Demi Lovato are often pointed to as examples of teenagers who have grown up in the spotlight, coming into a more adult style and being criticized for their bodies.

Back in 2015, Selena Gomez was publicly fat shamed after photos of her in a pink bikini appeared online. Gomez, however, didn't take the criticism lying down. Instead, she posted an image to her Instagram account rocking a sexy black, cut-out swimsuit with the hashtag #TheresMoreToLove.

As for Lovato, in April, she called out a headline that said she had a "fuller figure" while undergoing treatment for an eating disorder. In her response, Lovato wrote that she was, "more than [her] weight," and went on to say that her anger stemmed from people believing it was acceptable to comment on her body, especially given her openness about her history with eating disorders.

If Eilish does choose to change her style soon, that's her decision. But no matter what, you can bet she'll stay a fashion icon who is true to her own style.