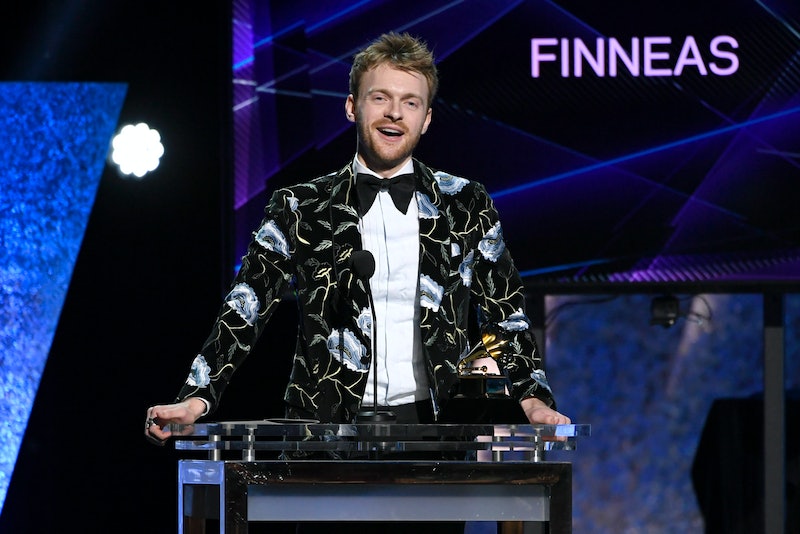 Early in the evening, Eilish and O'Connell performed their song, "when the party's over," while wearing matching Gucci outfits. Fans were predictably all over it. "the way billie makes an entire stadium get lost on her voice and enjoy her low and slow music," Twitter user @jeonlvr wrote. "just appreciating her voice. im [sic] head over heels for her voice."

In one of her early acceptance speeches (Eilish won five of her six nominations), the singer brought O'Connell onstage with her to accept their Song of the Year award for "Bad Guy." "This is my brother Finneas, and he's my best friend," she told the audience. Indeed, in addition to being collaborators, the siblings are incredibly close. "[Billie] knows exactly what she wants; she knows how to get what she wants," O'Connell told PeopleTV on the Grammys red carpet. "She knows what it'll take. She knows even clearer when something isn't quite right, how to get it to where it needs to be. That, to me, is what a true artist is."

O'Connell discovered his interest in music when he was young. "[Billie and Finneas's father] Patrick and I would hear something, and walk into the room and go, 'Who wrote that?'" his mother, Maggie Baird, told the Washington Post. "And [Finneas would] go, 'I wrote that.' Every time. I remember telling a person or two who was a singer or a songwriter, I'd be like, 'I don't know what to do, my son has this crazy talent.' They were kind of like, 'Oh, yeah, you're the mom, you can't possibly know.' And I'd be like, 'I think I do know.'"

The siblings' careers first took off in 2015, when Eilish sang her brother's song "Ocean Eyes," which he'd originally written for his band. She uploaded it to SoundCloud, and it became a viral hit. In an interview with Forbes, O'Connell called the decision to give the song to his sister a turning point for them both. "It was a very organic, easy decision to make," he said. "[Billie] just was going to do the song better. I had written the song that wasn't even in my vocal range, really. And she has my favorite voice. And I was like, 'Do you like this song?' And she was like, 'I love that song.'"

In addition to writing and producing with his sister, the musician has produced songs for Camila Cabello and Selena Gomez, and released his own EP Blood Harmony in October 2019.

But while O'Connell is a bona fide Grammys winner and musician in his own right, he's comfortable with the level of fame he has now. "[Billie] walks around, and because there's a billboard of her face on Sunset Boulevard, people really recognize her," he told the Washington Post. "In my perfect world, I get to be a professional musician and still go to Trader Joe's."

More like this
Taylor Swift May Miss The 2023 Grammys For Reasons Fans Know “All Too Well”
By Jake Viswanath
Will Beyoncé Perform At Or Attend The 2023 Grammys?
By Jake Viswanath
Cardi B, Olivia Rodrigo & More Will Present At The 2023 Grammys
By Jake Viswanath
Here’s How You Can Watch The Grammys 2023 In The UK
By Emma Madden and Catharina Cheung
Get Even More From Bustle — Sign Up For The Newsletter
From hair trends to relationship advice, our daily newsletter has everything you need to sound like a person who’s on TikTok, even if you aren’t.