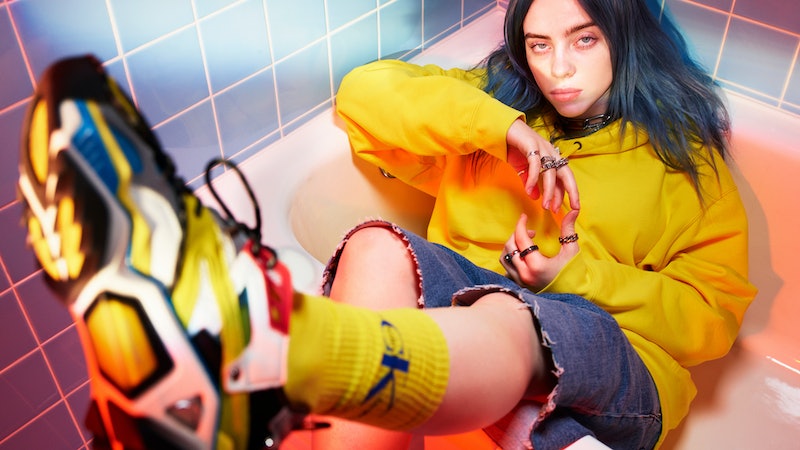 Image shot by Mario Sorrenti
By Marlen Komar
May 9, 2019

Calvin Klein wants to help consumers challenge and subvert the status quo. The brand believes that self-expression can lead to authentic connections, which can ultimately lead to change. Singer Billie Eilish talks about body positivity and authenticity in the new #MyCalvins campaign, where the artist was invited to share her own influential story.

Eilish is always unapologetically herself, whether that's through the way she flexes originality through her style and beauty, or the way she expresses herself through her music. The 17-year-old artist is featured in the newest Calvin Klein campaign, joining Shawn Mendes, Chika Oranika, and others.

In her video, Eilish opens up about how she hides her body so others can't pick it apart. The 30-second clips, as directed by Jonas Lindstroem, opens to Eilish in the bathroom, taking off her jewelry and looking closely into the mirror.

"I never want the world to know everything about me," Eilish says as her song, "When the Party's Over," plays in the background. "I mean, that’s why I wear big, baggy clothes. Nobody can have an opinion because they haven’t seen what’s underneath. Nobody can be like, ‘Oh, she’s slim-thick, she’s not slim-thick, she’s got a flat ass, she’s got a fat ass. No one can say any of that because they don’t know."

Eilish then laughs and kisses the mirror.

If you scroll through Eilish's Instagram, it's filled with #OOTD photos that prove just that. The artist has a penchant for baggy silhouettes, massive hoodies, loose tracksuits, and layers.

In addition to her interview video, there is a main campaign video that features all the #MyCalvins celebs. With Eilish's hit "Bad Guy" playing in the background, celebs like Bella Hadid and A$AP Rocky pose in Calvin Klein outfits. Most of them appear in flashes wearing sports bras and tight briefs, but Eilish stays covered in her sweats.

In a shorter 15-second video directed by Jonas Lindstroem, Eilish is sitting on an illusory column, which is reflecting the cloudy sky. Eilish is wearing her baggy hoodie and Bermuda cut-off jeans, swinging her legs. "You can’t fake authenticity," she says. She laughs at herself before adding, "What the f--- am I saying?"

When it comes to her personal style, Eilish says that she dresses in a way that pushes boundaries. That's her authenticity. "I just like dressing out of my comfort zone. I want to dress in a way that if I was in a room full of people wearing regular clothes, I would be like, ‘Oh, I bet everyone's looking at me.’ I want to feel that way. That's my casual," Eilish said in an interview with Harper´s Bazaar.

"My friend was explaining this to me the other day: ‘Most people feel like they need to dress casual and look like everyone else to fit in and that's where they feel comfortable.," Eilish explained. "I am not comfortable when I'm wearing just some jeans and a shirt. I just feel wrong... So my friend said, ‘Billie just likes to feel super judged.’ I love being judged. I'm here for it."

Just as long as you're not judging Eilish's body.