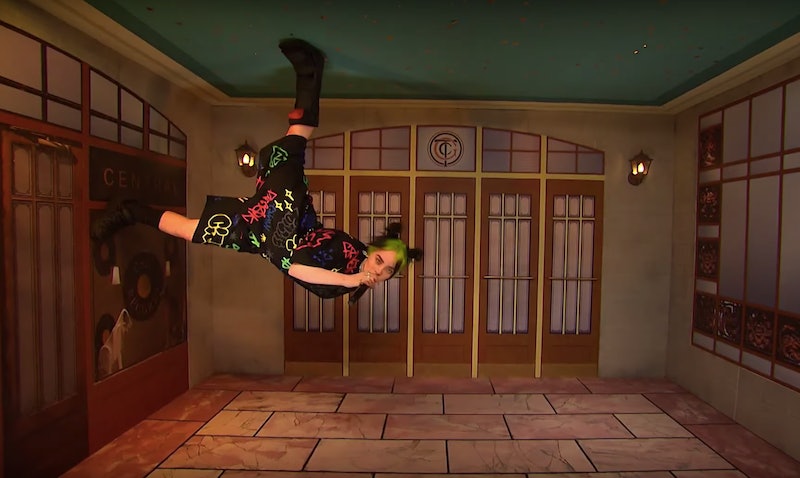 Saturday Night Live decided that it was time to try defying gravity, and premiered its 45th season with an impressive technical feat. During Billie Eilish's debut SNL performance of her hit song "Bad Guy," the teenage wunderkind appeared to walk on the sides and ceiling of the stage. It was a dizzying number to watch, and several fans were understandably confounded by how Eilish's stunt was executed (which she performed while wearing a medical boot, no less).

The 17-year-old singer performed two songs from her 2019 album, When We All Fall Asleep, Where Do We Go? And while her rendition of "Bad Guy" was the most mind-boggling, Eilish also sang "I Love You" with her brother and artistic collaborator, Finneas O'Connell. The second performance was much more low-key, with the two sitting in chairs and wearing matching outfits while O'Connell played the guitar.

Still, there was a clear highlight from her set. "That was one of the top 5 original SNL performances of all time," Twitter user scyber_ commented in response to an NBC tweet. Another fan begged Eilish to use the same effect on her just-announced world tour in support of her debut album, which kicks off in 2020.

SNL didn't explain how exactly they achieved this effect during "Bad Guy," but the camera zoomed out twice during her performance, so viewers could see some of the set. The square room that Eilish was standing in was likely rotating, so that the walls became the floor, and so on, making it appear like she was climbing them.

As that_mn_kid pointed out in the SNL subreddit, the NBC sketch show has done something similar to Eilish's performance before. Back in 1986, comedic magicians Penn & Teller performed a magic trick on the show, and only at the end, when the cameras zoomed out, did audiences learn that the two men had been hanging upside down the whole time.

Other fans connected the performance to other pieces of pop culture — namely Lionel Richie's 1986 music video, "Dancing on the Ceiling," which had a similar effect to the one used in Eilish's live performance. Another viewer thought it may be an homage to the scene in 2001: A Space Odyssey where one of the astronauts is jogging around the circular spaceship.

But while Eilish's performance was technically impressive, some viewers were clearly either unfamiliar with her music or weren't fans of her unique style. The young singer is certainly avant-garde — especially for SNL — and it's clear that not everyone understood her aesthetic.

But whether or not viewers liked the music, it was inarguably a bold, innovative performance that served as a fitting opener for the season premiere. Hopefully now that her SNL performance is over, Eilish has her feet planted firmly on the ground. She's certainly set a high bar for upcoming musical guests — it will be interesting to see if Taylor Swift can up the ante when she performs Oct. 5.

More like this
Kanye West Has The Most Kanye Reaction To Kim Kardashian & Pete Davidson's Split
By Jake Viswanath
An Ultimate Guide To The Music Of 'Rap Sh!t'
By Brad Witter
How Lady Gaga & Adele Are Closer To The EGOT All Of A Sudden
By Jake Viswanath
HSMTMTS Season 3 Will Give Olivia Rodrigo’s Nini A “Proper Sendoff”
By Brad Witter
Get Even More From Bustle — Sign Up For The Newsletter