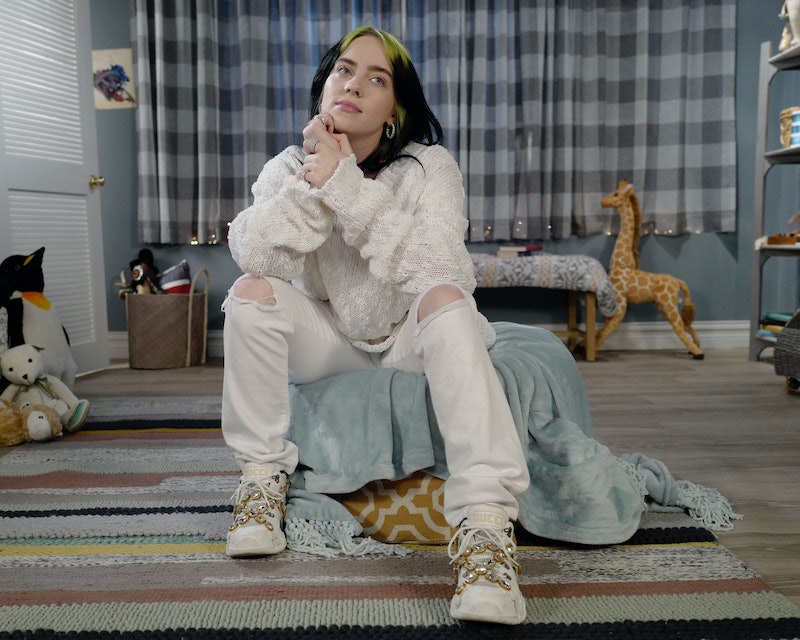 Billie Eilish has become a creative force with her daring and innovative videos. Now, she's more in control of her visuals than ever. Billie Eilish's "Xanny" music video is here, and not only does she take center stage in the new mind-bending visual, but she also took charge behind the scenes. "Xanny" is Eilish's first major music video as a director, and it's pretty on brand.

The haunting video sees Eilish in an all-white look sitting alone in a clinical, white room. It seems simple enough, before some disembodied hands begin putting out their cigarettes on her face, effectively rendering her a human ashtray. But she's not surprised by it at all. She gradually zones out as she sings the track's devastating lyrics, somewhat mimicking the side effects of the titular drug, before leaving the shot completely. It's remarkably effective, if not even a bit disturbing.

It's not a surprise that "Xanny" ended up being her directorial debut, considering how the song has a particularly sentimental message for her. She told The Guardian in a March 2019 interview that "Xanny" was inspired by her own experiences with loss, and she wanted to use it as a way to encourage her own fans not to bow to peer pressure to do drugs. “I know people around you doing that sh*t makes you want to, but you don’t have to," she said. Consider the new video to be a small warning.

“I’m very excited to share my directorial debut,” Eilish said of "Xanny" in a statement obtained by Bustle. “Visuals are so important to me, and I’m very proud to be in a place where I can present my creative vision exactly as I want it."

While this may be Eilish's first time directing a music video on her own, the artist has been involved in the behind-the-scenes of her clips for quite some time. During an interview with NPR in October 2019, she explained how she's been interested in directing music videos since she was a little kid, insisting that she's always been active in creating the visual aspects of her music career. "Since I was little, I loved videos," she said at the time. "I found a lot of my favorite artists from their videos. I used to watch videos with the sound off, just so I could watch the visual and not pay attention to how bad the song was, or how good it was."