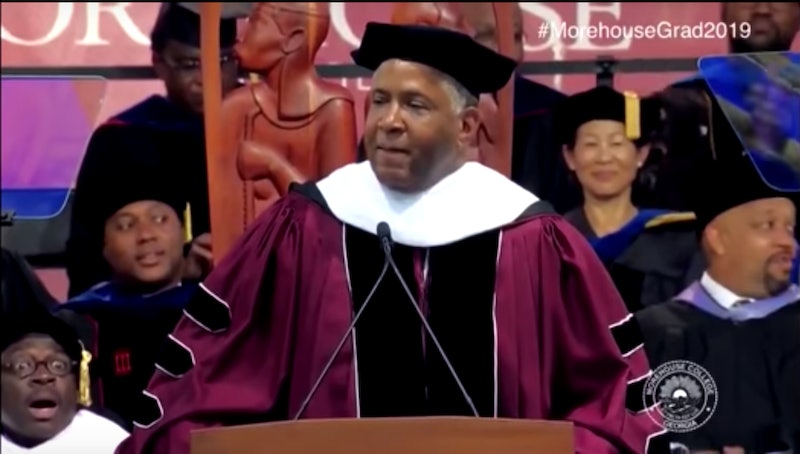 Few graduation gifts will ever top the one bestowed on Morehouse College's 2019 graduating class on Sunday. While speaking at the historically black college's commencement ceremony in Atlanta, Georgia, on Sunday, billionaire technology investor Robert F. Smith promised to eliminate the student loan debt of Morehouse's 2019 graduating class. According to CNN, Smith's gift has been estimated at $40 million.

"On behalf of the eight generations of my family who have been in this country, we're going to put a little fuel in your bus," Smith, who received an honorary doctorate at the ceremony, said in his commencement speech. "This is my class, 2019. And my family is making a grant to eliminate their student loans," he continued, eliciting widespread cheers and a standing ovation from a visibly surprised audience. "Now, I know my class will make sure they pay this forward."

Smith's class of 2019 student loan grant is the second gift the billionaire has made to Morehouse College this year. According to The Atlanta Journal-Constitution, Smith donated $1.5 million to the private all-male liberal arts college in January. Morehouse announced $1 million of Smith's gift would be dedicated to student scholarships while the rest would be used to establish a park on campus.

In comments to CNN, a Morehouse spokesperson estimated that the more than 300 students in the college's 2019 graduating class had loans totaling $40 million.

Tonga Releford, the mother of Morehouse 2019 graduate Charles Releford III, told The Atlanta Journal-Constitution that her son's student loans totaled about $70,000. "I feel like it’s Mother’s Day all over again," the paper reported she said.

Graduate Elijah Dormeus told The Atlanta Journal-Constitution that he had $90,000 in student debt. "If I could do a backflip, I would," Dormeus told the paper. "I am deeply ecstatic."

Smith serves as chairman and CEO of Vista Equity Partners, a software and technology venture capital firm he co-founded in 2000.

While Smith set no parameters or requirements for his gift Sunday, he did ask graduates to pay the gesture forward and encouraged them to view their degrees as a social contract. "The degree you earn today is one of the most elite credentials that America has to offer," The Washington Post reported he said. "But I don’t want you to think of it as a document that hangs on a wall and reflects what you've accomplished up till now. No. That degree is a contract — a social contract — that calls on you to devote your talents and energies to honoring those legends on whose shoulders you and I stand."

Smith's surprise gift was widely praised on social media. "I've gotten to know Robert over the last few years, and I can tell you this came from his huge heart, and his huge belief in the potential of Black people when we have the resources and opportunities," Author and American University professor Ibram X. Kendi tweeted. "He has invested in these young Black men and his investment will pay off."

More like this
Adam Driver & Joanne Tucker’s Relationship Timeline Starts With Cheese
By Jordyn Tilchen
'Waterloo Road' Is Back, With More Than A Few Familiar Faces
By Sam Ramsden and Vivian Iroanya
Mollie King & Stuart Broad Just Shared The First Pic Of Their Baby
By Sophie McEvoy
Kendall Jenner & Devin Booker’s Relationship Timeline From Start To Finish
By Jordyn Tilchen and Jake Viswanath
Get Even More From Bustle — Sign Up For The Newsletter