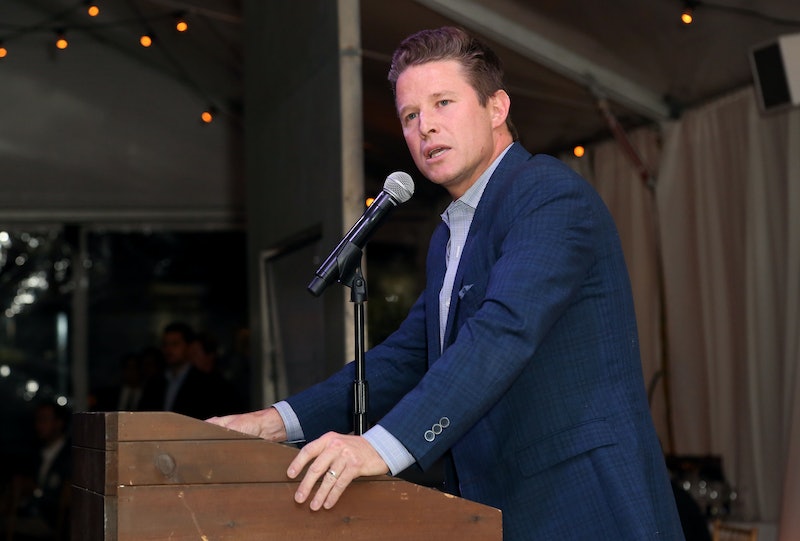 In October 2016, just weeks before the presidential election, a 2005 Access Hollywood tape leaked which purported to feature Donald Trump in conversation with NBC's Billy Bush, bragging about sexually assaulting women. In the recording, Trump credits his fame with allowing him to wantonly pursue women to whom he is attracted. But last week, news broke that Trump has reportedly contested whether the voice on the recording was actually him. In response on Sunday, Bush, who lost his job following the tape's leak, wrote an op-ed in The New York Times, in which he eviscerates Trump for suggesting the recording was inauthentic.

In the op-ed, Bush admit to, at the time, going along with what he described as "hypothetical hot air from America’s highest-rated bloviator." But, he says, after time wore on and multiple women accused Trump of sexual assault, he began to see Trump's statements on the tape as more than just braggadocios pontificating. (Trump, for the record, has vehemently denied any allegations of sexual misconduct, and has described the accusations as "totally fake news.") The conduct that Trump described seemed to manifest in the very allegations that women were reporting.

As a refresher, the most infamous portion of the Access Hollywood tape featured a brief monologue in which Trump says that he can grab women's genitals because he is famous:

Bush is heard agreeing with, and at times, egging on Trump's behavior. "Whatever you want," Bush said in response to Trump's comments about grabbing women. And later in the tape, he asks an actress to hug Trump, and then himself. "How about a little hug for the Donald?" Bush asks. "He just got off the bus."

But now, Bush said the events logged in that recording are shaded with foreboding. "Along with Donald Trump and me, there were seven other guys present on the bus at the time, and every single one of us assumed we were listening to a crass standup act," Bush wrote in Sunday's op-ed. "He was performing. Surely, we thought, none of this was real. We now know better."

One claim of sexual assault against Trump that Bush said he has reflected on was that made by makeup artist Jill Harth, who claimed that Trump aggressively tried to kiss her against her will in 1993. "Her story makes the whole 'better use some Tic Tacs' and 'just start kissing them' routine real," Bush wrote. "I believe her."

Similarly, Bush also mentioned allegations made by Kristin Anderson, a former model, who alleged that Trump slid his hands up her skirt at a New York nightclub in the 1990s. "That makes the 'grab 'em by the p---y' routine real," Bush said, again adding, "I believe her."

Bush said that in 2005, when the tape in question was recorded, he was acting in his own self-interest, growing relationships with celebrities in his role as a correspondent for Access Hollywood. At the time, Bush said, Trump was the biggest star at NBC, and everyone at the network had a vested interest in stroking the celebrity's ego.

Despite losing his job over the recording, Bush wrote that he believes he is a better person after all the events that have transpired in his life in the past year. And to the women who have accused Trump of sexual misconduct, Bush says he holds them in high esteem. "I will never know the fear you felt or the frustration of being summarily dismissed and called a liar, but I do know a lot about the anguish of being inexorably linked to Donald Trump," Bush wrote. "You have my respect and admiration. You are culture warriors at the forefront of necessary change."