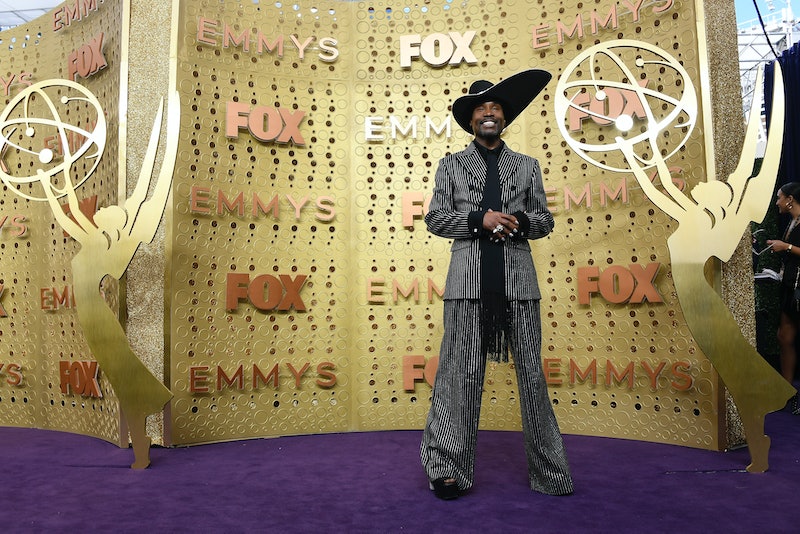 You can’t talk about award shows or fashion moments without referencing specific red carpet icons. Billy Porter’s Emmys outfit is a moment in itself, but it should come as no surprise. Porter came to slay a red carpet once again and the crowd went absolutely wild.

Whether or not you’re an avid red carpet show watcher, you’re bound to have come across a meme or two about Billy Porter and his ensembles. The actor’s Emmys look — a truly sickening Michael Kors suit — is another one for the books. According to The Hollywood Reporter, the fit is expensive — as in $130,000 worth of crystals and $55,000 worth of diamonds expensive. The actor's stylist, Sam Ratelle, told THR, "I I feel like people are expecting something obnoxious and grand, but I think [his look tonight is] going to be striking in a different way that just exudes class. I want to insure that, given that he’s just turning 50, this is a monumental moment for Billy and his career." Having a suit covered in pinstripes made from crystals and diamond is just extra enough for it to be a Porter-approved red carpet look.

"Given that he were to win an Emmy award, I want to make sure that these photos are iconic for the rest of his life and history because we’re going to see them for a while," Ratelle continued. And the stylist got his wish: Porter won for Lead Actor in a Drama series, making him the first openly gay, black man to do so.

Accessories and large accents are what make a Billy Porter Red Carpet outfit shock-worthy. For the Emmys, Porter sported an asymmetrical cowboy hat that was made by Stephen Jones millinery and black platform heels to work with his already very extravagant (and very luxe) outfit. When you have the potential to make history, you'd probably want to be wearing an extra AF suit, too. Plus, with a Tony already under his belt, Porter's win in the best actor category means another step closer to EGOT status.

Porter has already built a reputation for himself as one of the most show-stopping dressers at any red carpet event. Between tuxedo dresses and gold sequin jumpsuits, Porter bends the gender boundaries in fashion like cake work. The resume of Porter's outfits are so incredible though, they deserve a selfie book of their own.

One of Porter's most notable outfits is the last-minute black velvet tuxedo dress that Christian Siriano whipped up for Porter just in time for the 2019 Oscars.

In an interview with Vogue, Porter explained that being on a show with the largest cast of transgender people helped him come to terms with his queer identity even more

"I’m in a space where, being on Pose, I’m invited to red carpets and I have something to say through clothes," Porter said. "My goal is to be a walking piece of political art every time I show up. To challenge expectations. What is masculinity? What does that mean? Women show up every day in pants, but the minute a man wears a dress, the seas part."

For every red carpet, Porter uses it as an opportunity to challenge gender roles and norms. But for those who adore fashion, you'll watch Porter every time for the sheer glam of it all.