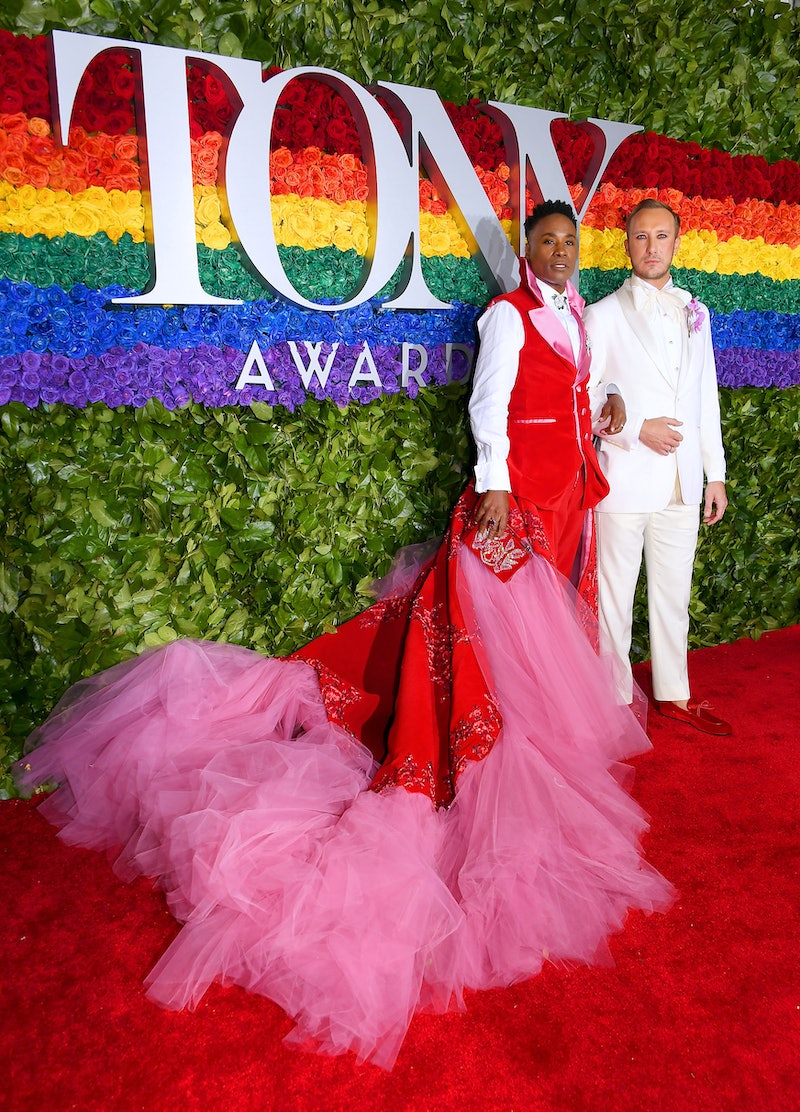 Billy Porter has been having an entire year of fashion moments. He has slayed every 2019 red carpet appearance with serious style. His black gown and tuxedo hybrid at the Oscars was unforgettable. His Met Gala jumpsuit dipped in gold and sequins was extraordinary. Billy Porter's 2019 Tony Awards outfit was no different — and it was peak Porter. The ensemble was as dramatic, glamorous, and featured pants with a full train. The train was constructed from the exact red curtain that fell for approximately 1,150 shows during his Tony Award-winning run in Kinky Boots, according to The New York Times. Porter's outfit may have been a gorgeous combination of red velvet and pink tulle, but it was totally green since it was repurposed material.

UPDATE: Porter's look also included over 30,000 Swarovski crystals, according to an email received by Bustle.

Scenery Bags, a handbag company that turns retired theater fabrics into accessories, initially bought the curtain fabric. The brand then reached out to Porter's stylist Sam Ratelle with plans to create a bag for the actor. However, things went in a different and ultimately glorious direction. Ratelle eventually enlisted Celestino Couture, which designs upcycled and socially conscious pieces, per The New York Times. He asked them start sketching a gown. It eventually evolved into the look you see now.

Ratelle told The New York Times that the designers first wanted to interpret Lola, Porter's Kinky Boots character. He had to curtail that plan, stating, "I had to go back to them and say, 'He's not a drag queen. He's a man in a dress.' We don’t want to confuse people, because he actually is not a drag queen. One day he might want to wear a dress, one day he might not."

Porter, who was on hand as a presenter at the Tonys, basically shut down the red carpet. The actor continued his fashion hot streak and served up a look like only he can. Fans and fashion watchers can pretty much expect the unexpected whenever Porter steps foot on a red carpet.

Porter's 2019 Academy Awards ensemble was a custom Christian Siriano creation. The full, velvet skirt was absolutely epic. The Pose actor offered a little insight into how he approaches his outfits for appearances, noting that nothing is left to chance. "I'm invited to red carpets and I have something to say through clothes," Porter told Vogue. "My goal is to be a walking piece of political art every time I show up. To challenge expectations." And that's exactly what he does.

Porter was "winging" it at the 2019 Met Gala, the theme of which was camp. He positively glowed in his liquid metal ensemble. The look had so many head-turning elements and further established Porter as fashion's favorite iconoclast.

Porter brought all of the sparkle to the 2019 GLADD Media Awards. He owned it in a red suit with a sequined blazer and wide-legged trousers. It was another excellent exercise in monochromatic fashion.

Statement-making fashion is Billy Porter's thing. And what a statement he made at the 2019 Tonys.