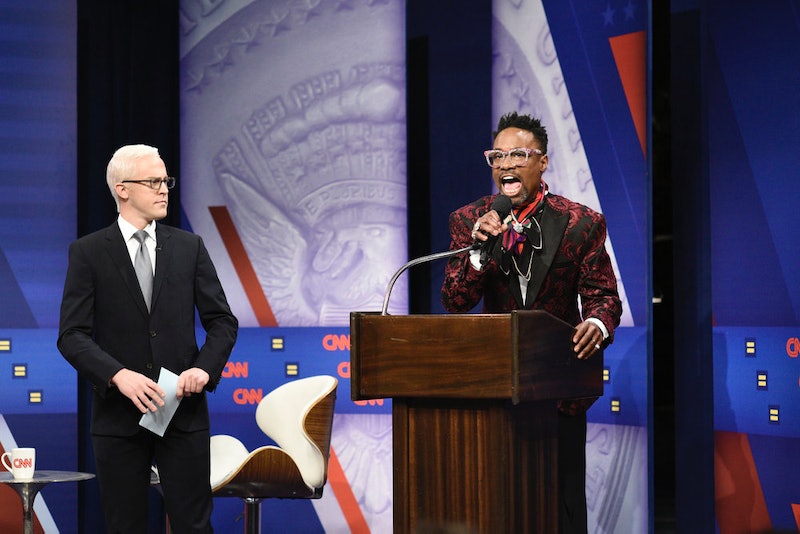 The Pose star offered funny introductions for each Democratic candidate, and each of the presidential hopefuls were played by celebs. From the SNL cast, Chris Redd played Cory Booker, while Colin Jost took on Pete Buttigieg. Kate McKinnon's appearance as Elizabeth Warren was a highlight of the sketch, and Porter had a special announcement for the Democratic frontrunner. "Warren-ing, Warren-ing," Porter said. "It's Elizabeth Warren!"

SNL cast members often impersonate political figures, but to capture the whole democratic field, the show brought a few more stars on board. Lin-Manuel Miranda made a cameo as former HUD secretary Julián Castro, which Porter announced by saying, "And now from the house of urban deliciousness, Julián Castro." Later, Woody Harrelson played Joe Biden, for whom Porter also had a quip. "Yes, yes yes, and now the the Delaware daddy whose only vice is the choo-choo train," Porter announced. "It's vice-president Biden, y'all!"

Porter's hilarious introductions made the political sketch even more entertaining, and they wrapped up an eventful week for the Tony-award winner. On Saturday, Porter confirmed his role in an adaptation of Cinderella from Sony, according to Deadline. During a Q&A session at the New Yorker Festival, the Pose star told the audience he was officially set to play the Fairy Godmother in the film, opposite Camila Cabello, who is starring as Cinderella.

During the New Yorker festival conversation, Porter also revealed he signed a book deal, as per the Hollywood Reporter. The Cinderella casting and book announcement round out a breakout year for the star. In September, Porter won an Emmy for Best Actor in a Drama for Pose, making history as the first openly gay man to receive the award, according to the New York Times.

In addition to breaking ground for his work on-screen, Porter also became a fashion innovator on the red carpet in 2019. Back in February, The Pose actor's tuxedo gown at the Oscar Awards was a show-stopper. Porter discussed the gown's political statement during a conversation with The Marvelous Mrs. Maisel Star Rachel Brosnahan, as per Variety. He said: "I know that there is activism inside of fashion. I'm an activist. I knew that that tuxedo gown at the Oscars would create a conversation surrounding what gender means, what all these rules we put on everybody in life."

While 2019 was full of career-defining moments for Porter, the next year will be equally eventful. In January of 2020, Porter will star in Like A Boss alongside Tiffany Haddish, Rose Byrne, and Salma Hayek, as per Oprah Magazine. In June, FX renewed Pose for Season 3, with new episodes slated to premiere in June of 2020. And for fans who can't get enough of Porter's energetic presence, it seems possible future SNL cameos could be in the future as well.

More like this
The Black Lotus Staff Has "Had Enough" In The 'White Lotus' Spoof From 'SNL'
By Brad Witter
Who Is Pete Davidson Dating? He & Chase Sui Wonders Got Caught Kissing
By Jake Viswanath
Man Meets Politics: ‘Boy Meets World’ Star Ben Savage Is Running For Congress
By Jake Viswanath
At 28, Rosie Perez Risked Her Career To Stop Playing Stereotypes
By Gabrielle Bondi
Get Even More From Bustle — Sign Up For The Newsletter
From hair trends to relationship advice, our daily newsletter has everything you need to sound like a person who’s on TikTok, even if you aren’t.