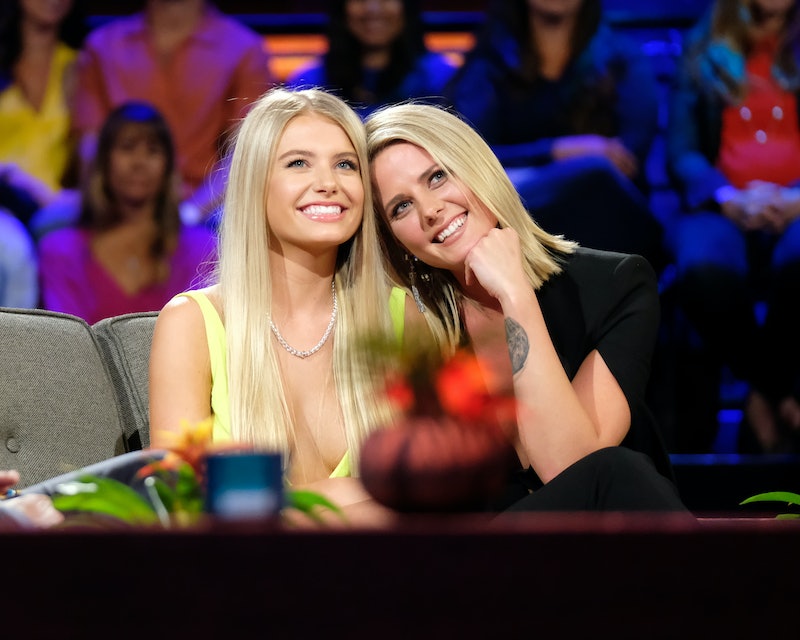 Demi Burnett and Kristian Haggerty made Bachelor franchise history when they got engaged on the Bachelor in Paradise Season 6 finale, as the show’s first LGBTQ couple. On Thursday, Oct. 31, Demi and Kristian confirmed they split via a statement on Instagram. Their joint statement showed they seem to be focused on "growing individually" after their breakup.

On Thursday, both Kristian and Demi shared the exact same statement on Instagram, but with different photos. In the caption, the former couple stated, “Our priority is doing what is best for us. With a heavy heart full of love for one another we have decided it is best for us to take a step back from our relationship. We ultimately want what is best for us in the long run and for us right now, that means being apart and growing individually."

They also thanked everyone for the "love and support" during their "journey" as a couple. They stated, "We will forever be proud of the impact our love story has made and we hope it has helped others feel more accepted and confident within themselves. We hope it reminded others they aren’t alone and don’t need to be ashamed of who they are."

The women concluded, "we remain committed to encouraging each other, supporting each other and continuing forward in a way best for us."

Although Bachelor Nation had been rooting for the couple, the breakup isn't exactly shocking news for fans. Demi reacted to fan speculation about the then-couple's lack of photos on social media in an Oct. 10 interview with Us Weekly. The Texas native told the magazine, "Every relationship is different and it’s like — I mean in the most respectful way — it’s nobody’s business how our relationship works. We both have so much going on right now."

In that same interview, Demi said, "Just because we don’t broadcast it doesn’t mean that we’re not together." That's a fair point, but there was one comment "broadcasted" on social media that caught a lot of attention recently. Demi posted a picture that she labeled as a "thirst trap" on Oct. 29. The next day, Elite Daily reported that Kristian's sister Caitlin Haggerty commented "Not desperate at all..." The comment has been deleted, but screenshots live on and fans took that as a sign that there was trouble in their post-Paradise lives.

Kristian also declared that Demi will "always have a piece of [her] heart" in an Instagram Story she shared with a photo from their engagement on Oct. 31 after announcing their split. Demi re-posted the story and wrote "SAME."

Both Demi and Kristian will always be remembered by Bachelor fans for bringing some diversity to the franchise and initiating new conversations that hadn't been a part of the show in previous seasons.