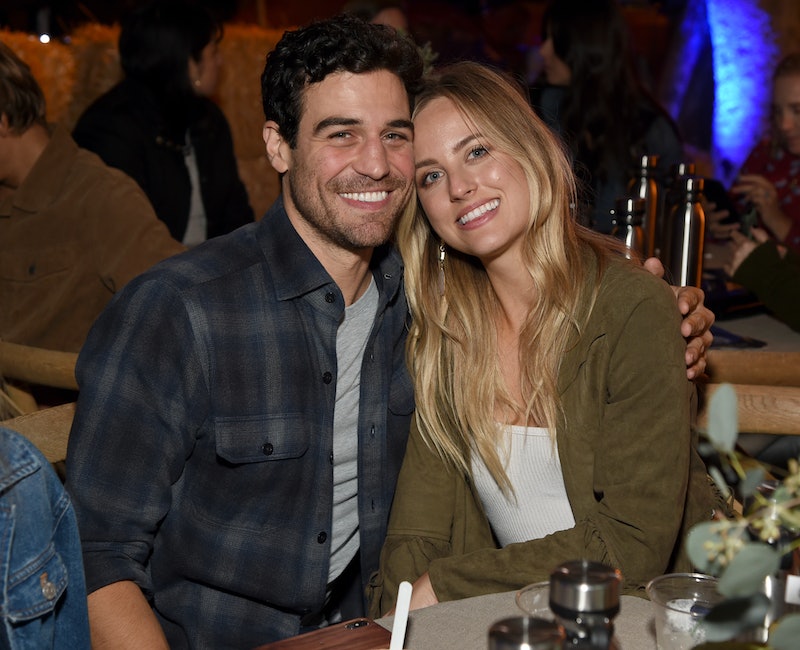 And just like that, another Bachelor in Paradise couple bites the dust. After dating for over a year, Joe Amabile and Kendall Long have reportedly split, releasing a joint statement announcing their breakup on Wednesday, Jan. 29. “We have decided mutually to go our separate ways. Joe has made the decision to move back to Chicago while Kendall will be remaining in her hometown of Los Angeles,” the former couple told BachelorNation.com. Bustle reached out to both Joe and Kendall's reps for confirmation, but did not receive an immediate response.

The statement went on to indicate that long distance may have played a significant factor into why they decided to call it quits, noting how difficult it is for either of them to be away from their families for too long. “Our family and friends have always been an extremely important element to who we are as people. We can’t imagine continuing our lives without them closer, especially when thinking of starting a family of our own one day," the statement continued. "We both respect each others’ decision and still have a great deal of love for each other. We appreciate all the love and support everyone has given us throughout our relationship.”

Kendall and Joe first started seeing each other during the fifth season of Bachelor in Paradise. Though the connection seems pretty instantaneous, Kendall experienced some doubts about her feelings, prompting them to leave the beach separately at the end of the summer. However, by the time of the reunion episode, the duo revealed that they had gotten back together shortly after filming and have been an official item ever since. Well, until now, that is.

Neither of them have addressed the reported split on their social media accounts, though it may only be a matter of time. The pair are extremely active on Instagram in particular and have posted many photos of the two of them together — some of which were fairly recent. On Jan. 6, Kendall uploaded an image of them and their new dog Pistachio during a recent "Family Glamping" trip where they all seem extremely happy, making this news all the more heartbreaking.

At the end of the day, Kendall and Joe need to do what's right for them, even if it means putting an end to their adorable love story. At least fans can take comfort in knowing that they ended things on good terms and don't seem to regret the time they shared together. It's not the rosy ending any of us wanted, but it's certainly better than nothing.

More like this
Why Wasn't Teddi At The 'Bachelor In Paradise' Reunion?
By Brad Witter
Khloé Kardashian’s Son Was Born A Week Before Anyone Realized
By Jake Viswanath
Jill & Jacob Split Up Right After He Hard-Launched Their Relationship On IG
By Grace Wehniainen
Victoria Fuller & Greg Grippo Addressed Their Relationship Timeline
By Grace Wehniainen
Get Even More From Bustle — Sign Up For The Newsletter