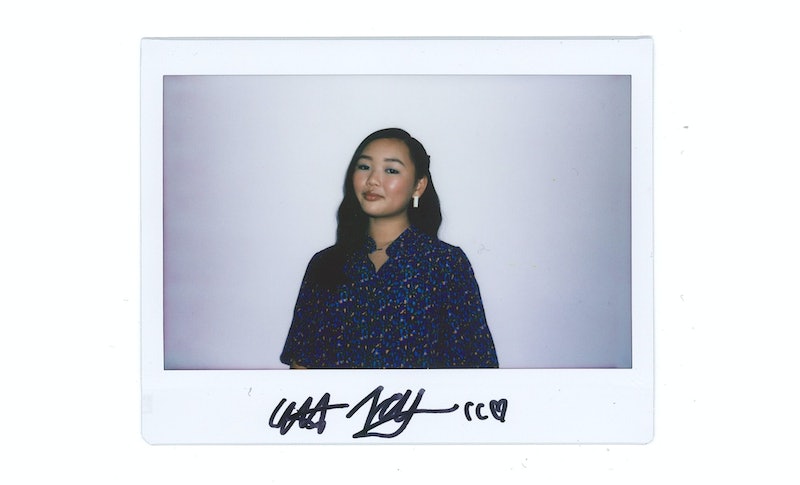 When celebrities hang out with Bustle editors, we want to give them the chance to leave their mark. Literally. So we hand them a pen, a piece of paper, a few questions, and ask them to get creative. This time, Birds of Prey star Ella Jay Basco is leaving her mark in the Bustle Booth.

Ella Jay Basco, the 13-year-old Los Angeles native who makes her film debut in Birds of Prey on Feb. 7, takes her craft seriously. To play Cassandra Cain — the pickpocketer and reluctant Harley Quinn sidekick who finds herself at odds with Gotham’s latest villain, Black Mask (Ewan McGregor) — her research extended far beyond the comic book universe and into the archives of film history. “Natalie Portman in The Professional was a big inspiration," she tells Bustle. So was Jodie Foster's character in Taxi Driver. That "scrappy street kid really helped me figure out who Cassandra Cain is,” she adds.

But all of Basco’s studies couldn’t prepare the Korean and Filipino actor, who had only done a few guest spots on shows like Grey’s Anatomy and Veep prior to production, for the experience of being on a major film set. Luckily, her co-star and frequent scene companion Margot Robbie, who plays Harley Quinn, was there to welcome her into the fold. “She felt like an older sister to me and really helped me grow as an actor,” Basco says. Robbie also helped her let loose. “We love dancing and rapping to Cardi B together. [Songs like] ‘Money’ and ‘I Like It.’ We made up a handshake, too, with a whole chant,” she adds.

Birds is dominated by women — not just in front of the camera, but behind the scenes, with director Cathy Han, writer Christina Hodson, and executive producer Robbie helping to foster a safe and collaborative environment on set. "It's such a crazy, out-of-this-world movie and for me to be a part of the movement of it being made by women was such an incredible experience," Basco says.

It’s also a blueprint she hopes to emulate as she moves forward in her career. “Watching Margot switch between the hats of being a producer and an actor and just being such a resource [for the project] is something that I hope to do in the future. Because representation matters,” she says. Find out what else matters to Basco — from Cheer to Harry Styles — in her Bustle Booth questionnaire below.

More like this
Zendaya Shares Intimate Photo With Tom Holland To Wish Him A Happy Birthday
By Bustle Editors
Margot Robbie Breaks Her Silence On *That* Viral 'Barbie' Moment
By Maxine Harrison
The New Bachelor Will Be Announced Next Week & Here Are The Top Contenders
By Grace Wehniainen
On 'The Handmaid’s Tale,' Christine Ko Fights Back
By Gretchen Smail
Get Even More From Bustle — Sign Up For The Newsletter