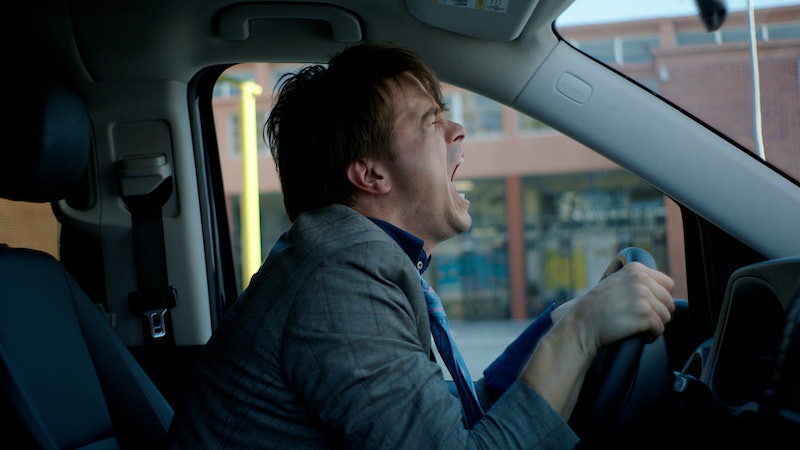 It's not easy to talk to some people about feminism or the subject of fragile masculinity. Oftentimes, the folks who you want most desperately to understand these things are the audience most unwilling to listen. Luckily, art can often bridge those gaps between viewpoints, and Marianna Palka's Bitch, which debuted at the 2017 Sundance Film Festival, attempts to broach the topic of fragile masculinity with heaping serving of empathy for the fragile man himself. It just might be the key to breaking through that next conversation with your conservative family members.

"I think that if your dad watched the movie, it would open up a dialogue," says Palka, the writer, star, and director of Bitch, speaking to me at the Sundance Film Festival in Park City, Utah. "And I think that’s the purpose [of the film] as well, because it's not like a bad depiction or like a negative depiction of masculinity, it’s positive about men and women."

The film centers on — stay with me through this description because it's going to get weird — a stay-at-home mom, Jill (Palka), whose husband, Bill, (Jason Ritter) cheats on her, demands subservience of her, and basically refuses to see her for the person she is. Jill reaches a breaking point at the top of the film and attempts suicide, and fails. Bill doesn't even seem to notice. So Jill reaches another breaking point, and this time she begins acting like a wild dog. It's a rather straightforward and simple metaphor — Bill treats her like a dog, so she becomes one and his life spirals out of control without Jill by his side.

Ritter's Bill sees his whole world shattered, his self worth is brought into question, and he selfishly sees Jill's psychotic break as something that happens to him. His behavior throughout the film is both a triumph of Jill's unique form of torture on her toxic husband, and also the behavior of a man that would turn any feminist's stomach many times over. And yet, the depiction of Bill and his shattered world isn't entirely unsympathetic. Thanks in great part to Ritter's performance, there is still a living, breathing, human underneath all that terrible behavior. And that human, throughout the course of the film, actually starts to grow and learn.

And that just might be why this film has the potential break through to those who might not ordinarily listen.

Scottish-born Palka adds that she sees the film as a "love letter to America" and a way to say "here are all of our differences and we’re still together in them."

Of course, Palka's hope that the film bridges the gap between conservative and liberal audiences is an ambitious one, but I can't help but hope that she's right.