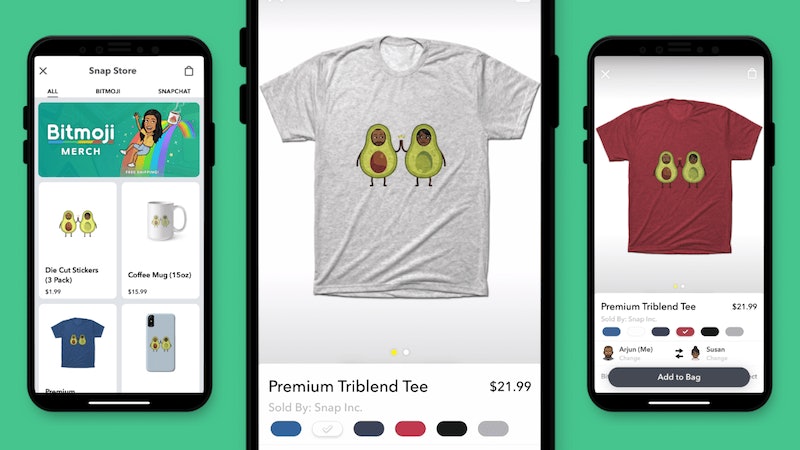 And today in Things You Had No Idea You Wanted, we have this: According to TechCrunch, Snapchat is launching a Bitmoji merch store this week. That’s right — an entire online store where you can get actual, physical objects adorned with any Bimoji of your own making. Or your friends’ making. Both are fair game. The store will open its virtual doors in the United States to iOS users via the Snapchat app on Nov. 15, 2018 — just in time for all your holiday shopping needs. Items with your best friend’s face on them? So passé. Items with your best friend’s Bitmoji on them is where it’s at now.

Snap Inc. — then known simply as Snapchat — acquired Bitstrips, the Toronto-based company behind the personalized emoji and avatars known as Bitmoji, in March of 2016. Although Bitstrips had been around for a while by that point — the company was founded in 2007 — Bitmoji were only a few years old; they had originally launched in 2014. Since Snap’s acquisition of Bitstrips and their Bitmoji, however, the customizable avatars have spread far and wide, not only becoming integrated with Snapchat, but also spreading to iMessage, Gboard, and Chrome.

Snap’s merch store, meanwhile, arrived in February of 2018. Available only within the Snapchat app itself, the store brings things like plush dancing hot dogs and shirts adorned with winky faces to our actual, physical world — for a price, of course. According to The Verge, that plush dancing hot dog will set you back around $20. (And, I mean, hey, if you have $20 to burn and you want to spend it on a plush dancing hot dog, you do you.)

With these two developments having been part of the Snapchat landscape over the past few months and years, it seems like the natural progression of things for them to come together, and, well… that brings us to today’s Bitmoji store announcement. Opening on Thursday in the United States in the iOS version of Snapchat only, the Bitmoji merch store will enable you to buy everything from stickers to T-shirts with personalized, customized Bitmoji on them. Want a coffee mug featuring you and your bestie in Bitmoji form? Done. Hoping to decorate your couch with a Bitmoji throw pillow? It’s yours. Shower curtain? Yep. TechCrunch’s report indicates that prices for items will be as cheap as $2 for the stickers; it’s not yet clear how expensive some of the more involved items will get, but sweatshirts will apparently cost around $27. The merch store will be accessible from within the larger Snap Store, which you can find by going into the Settings menu of Snapchat itself.

Of course, there’s one big downside to the Bitmoji store right now: Android users and people located outside the United States are out of luck for now. It’s almost certain that the Bitmoji merch store will become more widely available in the future — but for now, those sweet, Bitmoji-adorned doors will remain shut to Snapchat users on other operating systems and/or in other countries. Uh… sorry about that.

But hey, guess what? Even if you’re not a U.S.-based iOS user, though, there are still ways you can get your hand on some custom-made Bitmoji gear. It’s not official, of course — not like the Snap Bitmoji merch — but many e-retailers will happily take your Bitmoji creation and slap it on any number of items for you. Etsy is great for that: This shop, for example, makes Bitmoji coffee mugs. This one, meanwhile, will actually hand paint your Bitmoji on a wine glass. This one will make you a Bitmoji phone case. And this one will make you a tank top. In each of these cases, you’re instructed to create your Bitmoji in the Bitmoji app when or after you make your purchase; then all you have to do is send an image of the Bitmoji off to the sellers. From there, they’ll put the image on whatever item you’ve requested.

There’s other exciting news on the Bitmoji/Snapchat front, too: Friendship Profiles, which Snap announced on Tuesday, are set to offer a new take on a more traditional social media experience, while Bitmoji Stories might bring the little customizable avatars back to their comic strip-based roots. (A Snap spokesperson described Bitmoji Stories to TechCrunch as “lighthearted stories [told] in the form of short comic strips” which will be created by Snap’s Bitmoji content team "[starring] the Snapchatter solo or with a friend.”)

But, I mean… people love their merch. And, be honest: It’s hard to resist the absurdity of showering behind a giant, cartoon version of yourself every morning, isn’t it? Look for the Bitmoji merch store in the Snapchat Store starting on Nov. 15.