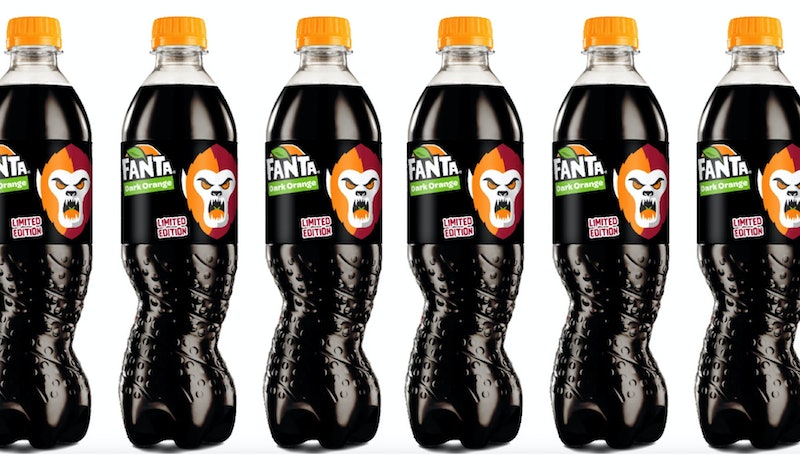 You know you're on holiday when you're sipping on Fanta Limon in the European sun, am I right? Bliss. Most supermarkets and restaurants don't stock the Limon flavour and while many of us wonder why, there's no taste quite like it on holiday, so it can be kept for those special occasions. Orange Fanta has long been loved by the nation and among the orange flavoured fizzy drinks, it's usually on top. But what if I told you that Fanta were expanding their flavours and that black Fanta is coming to a supermarket near you.

Last year, during Halloween 2018, The Sun reported that 150,000 Brits had voted in a "Fanta Election" to decide on new flavours for the drink, and the winning two were blood orange and grapefruit. This year, the team at Fanta are mixing things up again. To celebrate Halloween 2019, the drink is turning a very spooky shade of jet black. That's right. Black Fanta is here. Creepy right? But I guess that's kind of the point.

This new flavour — officially called Dark Orange — is currently available exclusively at ASDA for the not-so-terrifying price of £1.25, so if you're planning on hosting a Halloween party, definitely get Dark Orange on your list. It'll be the perfect addition.

Metro reports that artist Noma Bar has collaborated with Fanta to create a Fanta-inspired werewolf that'll bring even more of a Halloween feel to this new flavour.

If you're wondering how the guys at Fanta get their famous fizzy to turn this alarming shade of black, The Sun reports that it's all down to a "so-called vegetable carbon, which is a black food colour additive often used in confectionery products."

And if you're wondering about the sugar content of this Halloween-themed drink, The Sun reports that "each 250ml serving contains 48 calories and 10.8g of sugar — roughly 2.5 teaspoons. In comparison, Fanta's traditional orange flavour contains the same amount of calories and 12g of sugar in 250ml." So no rotten teeth over here.

The Daily Star reports that Dee Woolcott, Senior Brand Manager for Fanta Great Britain, has said of the drink:

"Halloween is a huge moment in the year and to celebrate, we wanted to launch a new, fun version of Fanta that is delicious, but with a scary twist. So, the only question is — dare you taste the dark?"

I think this is something you definitely need to try, at least once. According to The Mirror "the new jet black bottles will be available in both 500ml and two litre bottles for a limited time in September, and will also be available across stores nationwide in the next few weeks." So if you're looking to get your hands of one of these, I would act fast. Because I'm guess bottles are going to be flying off the shelves a mile a minute come Halloween. This is for sure the kind of thing that people would appreciate you whipping out at a themed party come October 31. So what are you waiting for?

More like this
Tacos Are Chef Kay Kay’s True Love Language
By Maxine Harrison
The Finger Lickin’ Good KFC x HYPE Collab Serves A Bucket Bag For Chicken
By Darshita Goyal
I Tried The $20 TikTok Viral Oishii Strawberries — Here's What I Thought
By Sophie Hanson
Trust Me, Pickle Martinis Are The New It Drink Of The Season
By Emma Carey
Get The Very Best Of Bustle/UK