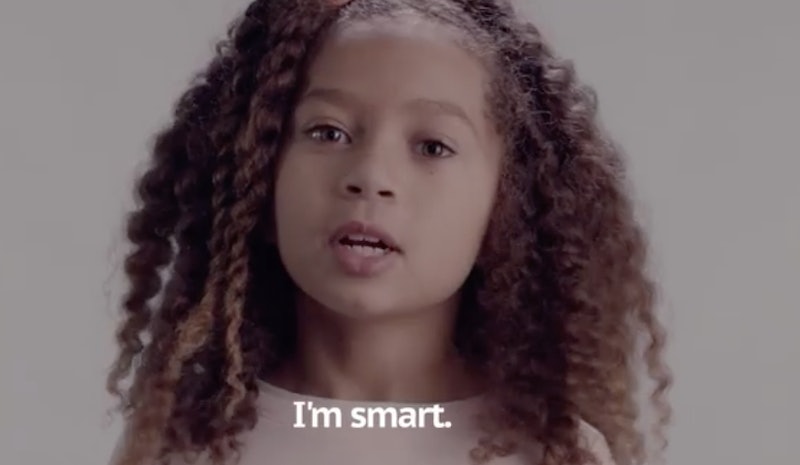 A new campaign is drawing attention to interact with our black female students within an educational environment — and given the experience many black girls have at school, it's sorely, sorely needed. As part of their Let Her Learn campaign, the National Women's Law Center has released a video featuring black girls with words they've commonly heard others use to describe them written on their bodies. A powerful depiction of the verbal stereotyping many young black students face from their teachers and peers, the video shows how these racially-charged words cause harm: They interfere with girls' ability to learn in a huge way, effectively shutting them out of their right to an education.

The video also features real-life footage that highlights some of the most shocking incidents of racism in U.S. classrooms in recent years. Remember Lamya Common, whose braids were allegedly cut off by her teacher in 2011? (The district attorney's office decided not to file criminal charges; however, the teacher was issued a $175 ticket for disorderly conduct by the police.) Or the video of the South Carolina student being thrown to the floor by a school police office in 2015 for using her phone in class? (The officer was fired, but did not face charges; prosecutors determined that the officer's actions "[did] not warrant criminal charges," according to the decision.)

The Let Her Learn video reminds us of these incidents while highlighting the emotional impact this kind of school environment can have on young women.

Stereotyping and mistreatment of black female students is borne of implicit bias from both students and other educators — but of course, the thing with implicit bias is that it's impossibly hard to pinpoint and even harder to eradicate in a formal learning environment. However, studies show that black girls are still more likely to be suspended from school than their white counterparts, despite there not being any evidence to suggest that they are worse behaved than their white counterparts — something which is also highlighted in the video.

And we have to do better. The Let Her Learn video does not, of course, teach us everything we need to know; it does, however, offer a place to start. Here's what it's often like to be a black girl at school — and what we can do to change the experience for the better. All kids have the right to an education, and no one should ever be denied it.

Black Girls Are Stereotyped By Peers And Teachers

"This is what they call me in school," a girl states at the beginning of the video. What follows are images of girl after girl with words like "rude", "aggressive," "loud", and "angry" written on their bodies in large, white letters.

This shocking statistic exists despite the lack of evidence to suggest that black girls commit any more serious offenses than their white, female classmates at school.

Black Girls Can Break Free From These Stereotypes

The most poignant part of the video sees the actresses wiping the negative words from their bodies as they re-define themselves as "leaders" who are "sensitive" and "powerful."

Racial stereotypes are de-humanizing and work only to entrench the already uneven power balance that exists in our society at large. Here's hoping that the positive video depiction of black girls in the Let Her Learn video — and the goals of the initiative at large — will help to overshadow and eradicate the negative messages that are pushed upon our black students.