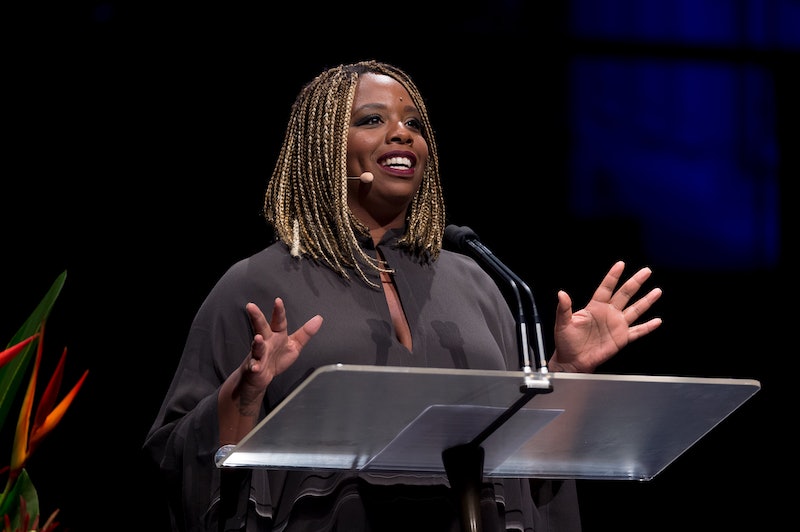 Historically, black queer people have been left out of the history books. There was a significant amount of queer people who led with and joined Martin Luther King, Jr. in the civil rights movement. People like James Baldwin and Audre Lorde, Alice Walker and Bayard Rustin. It was a struggle to have black queer people be at the forefront of the movement, but they always were.

There’s been a history throughout movements about what’s acceptable and what’s not acceptable. I think because the black church in a lot of ways was the pillar of the civil rights movement, there was a significant amount of centering on what’s most normal, which included a very strict idea of the binary as the thing that we wanted to look for to fight for civil rights. And that often didn’t allow for other stories to be told about black queer people, about black trans women, about black trans men.

In the last decade, I’d say, these stories have been uncovered by a number of people. And those of us who grew up queer and black searched for those stories; often, they were either buried or not spoken about. But once they were uncovered they really provided new language for queer black people and how we understand freedom struggle.

Black Lives Matter has now existed for four and a half years, and in that time we’ve dedicated ourselves to the movement to fight anti-black racism. My book, When They Call You A Terrorist: A Black Lives Matter Memoir, gives weight to that. It’s a coming of age story of a young black girl growing up in Van Nye, Los Angeles. It’s my coming of age story of being an organizer and an activist. And I talk about what it means to fight for all black people and what it means for me to be a black queer woman, and this work and what it has meant.

I went to a high school that had social justice programming in Los Angeles, California, and part of that was learning about freedom struggles, like the end of apartheid in South Africa, and the struggles within mainland China during the communist era. I was introduced to Audre Lorde and bell hooks during this time, and it really shaped my understanding of my own personal existence as a black person in this country.

I think that there is a consistent need for people to see a black cis man at the center of the movement. I think there’s also been a consistent need to see blackness as sometimes a detraction to the larger movement goals, or talking about blackness, or centering blackness. In the last year we’ve seen this administration rise and literally develop tactics to oppress all types of people — women, men, trans folks, poor people, black people, Latinx, indigenous people. There’s a deep need for us to bring our movements together. We should be in solidarity with one another at this time because we’re up against one of the greatest threats to American democracy.

But I feel hopeful in our movement. We’ve been able to claim victories, even in this last year, even with a president that has just been so destructive.

The word inclusive isn't one I like to use. Black people are queer. We are women. We are trans. We are poor. We are everything. And what Black Lives Matter does is welcome those at the margins to be at the center of our movement. We honor all black lives. All black people have to be free in order for black people to be free.

As told to Clarissa-Jan Lim.