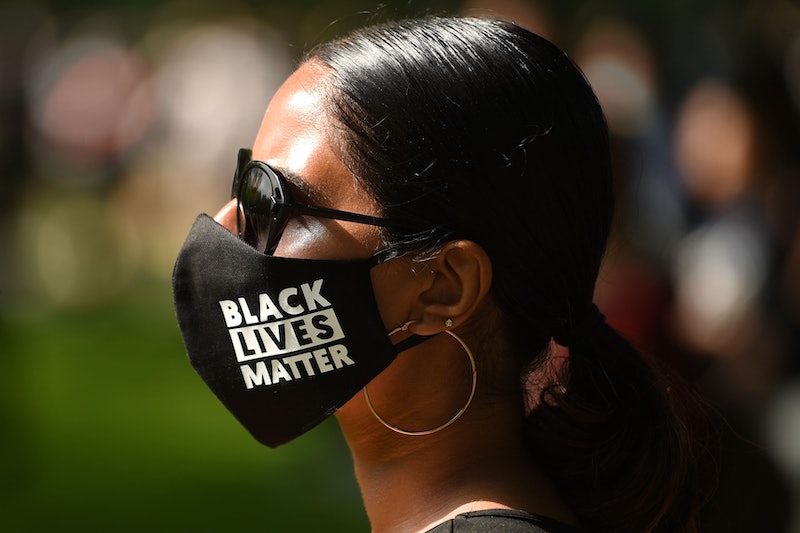 As demonstrations protesting the killing of George Floyd and other Black victims of police brutality swept the nation, many speculated the mass mobilizations would lead to a spike in coronavirus cases. But protestors can rest easy: A working paper published by the National Bureau of Economic Research has found that Black Lives Matter protests haven't actually increased coronavirus cases in the U.S. The paper, which hasn't yet been peer reviewed, looked at data from Black Lives Matter protests in 315 different cities over three weeks, and concluded that there is "no evidence that urban protests reignited COVID-19 case growth."

When the protests first began after the killing of George Floyd by police on May 25, there were concerns that protesters in crowds often couldn't practice social distancing. Further, despite most protestors wearing masks, shouting and chanting were thought to potentially send more viral droplets into the air, and the use of tear gas was criticized for similar reasons. The working paper shows these factors didn't actually affect case counts. The scientists looked at anonymous cellphone tracking data from each city, and compared it to statistics from the Centers for Disease Control & Prevention (CDC) on local coronavirus cases. They also looked at data from control cities, which had no reported protests.

According to the CDC data, cities with and without protests showed the same rates of growth in coronavirus cases, before and after protesting started. It didn't seem to matter whether people were thronging the streets in masks, or staying inside. The average incubation time for coronavirus is 5.1 days, and the scientists looked at a minimum of 14 days of data after protests in each city. If there was going to be a spike, they would have seen it by now.

The scientists behind the paper found that people in cities with protests stayed at home more during protests than they did beforehand, and not just because there were curfews in place. This stay-at-home effect was particularly strong in places where there were protests every day, and in areas where the media reported on protest-related violence. There's no better way to socially distance than to stay indoors.

This isn't the full story. For one, the scientists point out that their data doesn't capture people who came in from outside cities to protest, then went back home. Protesters are also often young and healthy, which could impact their response to the coronavirus. We'll need to see more data related to COVID-19 cases and Black Lives Matter protests as they unfold over the months to come.

The big picture, though, is really positive. "Public speech and public health did not trade off against each other," the study says. If you're protesting, try to maintain social distance, wear a mask, wash your hands, and raise your sign high.