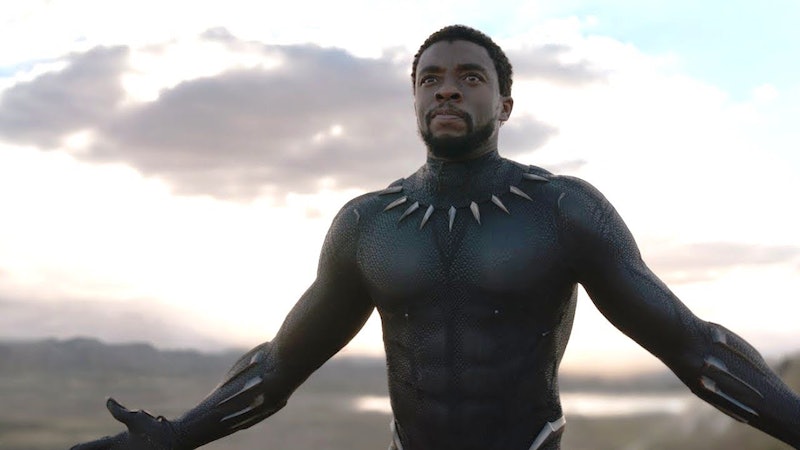 The year’s biggest superhero film, Black Panther, comes on the heels of the January report that President Trump reportedly said that people from Haiti and African nations were living in “sh*thole countries.” The reported remarks are disgusting and almost laughable — how is Trump going to attempt to walk them back once Black History Month rolls around? But more seriously, how can Americans from Haiti and Africa, especially young girls and boys, ever hope to feel welcome in America again?

While Black Panther can’t solve every problem relating to Trump’s racism or solve the feelings of malaise in those affected by his comments, the new movie can serve as a reminder that the president's opinions about black countries are false. With its Africa-first focus, plus its mostly black cast, Black Panther will prove to audiences that everyone is capable of having a superhero inside of them, even folks from the reported places Trump wrongly feels add no value.

Africa is a continent full of diverse countries, with many of them just as developed (if not more so) than America. And Wakanda, the fictional nation at the heart of Black Panther, is the perfect representation of what Africa offers the world in terms of cultural heritage, world history, and technological and economic advancements. Some of that worldview is hinted at in the Black Panther trailers, which usually begin with government operative Everett K. Ross (Martin Freeman) assuming that Wakanda is a country with little value.

Ross' ideology isn’t dissimilar from how the West often views real nations that we consider “third-world" and less technologically savvy or as industrialized as countries like Great Britain or America. "For much of the period from the 15th century till now... Europe has viewed the people of Africa through the distorting veil of racism and racial theory," wrote David Olusoga for The Guardian in 2015, adding that, in the 18th century, "the men who set out to defend slavery assembled a vast arsenal of new claims and old theories about black people, which they then codified, refined, and disseminated through books, pamphlets, cartoons and speeches." He cited Edward Long's 1774 book, History of Jamaica, as the seminal text that spread falsehoods about the African diaspora; it called Africa the source of "every thing that is monstrous in nature" and, as Olusoga wrote, included "vitriolic denouncements of Africans as irredeemably inferior and perhaps not even human."

The same ideas that crossed the Atlantic from Britain shaped how Americans viewed Africans, as well. Stereotypes of black people as being lazy, immoral, hypersexual, animalistic, criminalistic, and unable to govern themselves — stereotypes that have been documented in American pop culture like vintage advertisements, blackface caricatures, and the first Hollywood blockbuster, Birth of a Nation — continue today. The result of that fantasy, though, is a harsh reality for black Americans. In general, black people are overly prosecuted in the judicial system, are criminalized by police, receive lower income than their white counterparts, and are more frequently denied basic services, including proper medical care. Thanks to Serena Williams' pregnancy, the startling mortality rate of black women in childbirth as opposed to women of other races came back into the mainstream consciousness, too.

The history of stereotypes against blackness have also affected Africans and other members of the African diaspora. Through the lens of media, Americans often see a version of Africa that is poor, barren, and filled with people suffering from famine and disease. Ezekiel Makunike wrote for The Center for Media Literacy that "colonialism and... Cold War politics" have influenced the lens through which America views Africa, saying, "For American readers or viewers to be interested, news out of Africa must be negative. It must conform to the traditional stereotypes in its spotlight on grotesque and sensational events. It must show misery, corruption, mismanagement, starvation, primitive surroundings, and... chaos and outright anarchy."

Reducing a country's value down to stereotypes is obviously wrong, but, while it's important to understand the various contributions Africa and "sh*thole" countries like Haiti have made to the world, it's also imperative to know that a nation's value isn’t in what type of goods it can produce or what type of global market share it can grab. A nation's value is in its people. Every person, regardless of their birth country, has the potential to make the world great, and good leadership is recognizing this and giving immigrants who have chosen to live in a country a shot to live out their dreams. Unfortunately, as we've seen in America, this isn't always the case.

In Black Panther, Wakanda uses the West’s racism to its advantage. For much of its modern history, the nation has been a technologically advanced, highly educated, rich nation. But the government knows that if other countries knew this, Wakanda would be breached and exploited in a matter of days. Their cultures wouldn’t be protected, their Vibranium supply would be short, and all of their technological resources would be co-opted by nations under the guise of “allyship.” So instead of showing off its abilities, the country assumes the stereotype of Africa that the West — particularly America — expects it to be.

The exploitation of Africa by the West is not just a fictional problem, of course. The Atlantic Slave Trade trafficked between 10 to 12 million Africans to Britain, North America, and islands in the Atlantic, leading to broken families, broken cultures, and destroyed identities. Richard Drayton wrote for the Guardian in 2005 that, going by the estimates of British academic and theologian Robert Beckford and experts, Britain's debt to Africa can be calculated "to be in the trillions of pounds." This number for America is just as high; in 2015, Newsweek published an article citing Connecticut researcher Thomas Craemer, who estimated that reparations could cost America as much as $14 trillion. However, as Drayton stated in his piece, "the real debt is incalculable" because "without Africa and its Caribbean plantation extensions, the modern world as we know it would not exist."

There are more recent examples of the West exploiting Africa's resources like iron ore and oil, too, leaving African nations with low employment and opportunity, as the BBC reported in 2012. Even your jewelry might be at the expense of Africa's wellbeing; civil wars have broken out over control of African diamond shares, with the jewels at the center of the fight becoming known as “blood diamonds” or “conflict diamonds.”

Considering how the West often treats other African nations, it’s no wonder why Wakanda, if it existed, would go undercover. But while Wakanda knowingly uses the West’s stereotypes for its own preservation, the country’s decision to stay insular reflects how, in real life, other nations might start to shield themselves from America’s reach, if they haven’t already. America has already lost 40,000 jobs due to a downturn in foreign tourists, with experts citing "Trump's travel ban proposals and his anti-immigration rhetoric" as some of the factors. "It's not a reach to say the rhetoric and policies of this administration are affecting sentiment around the world," said Adam Sacks, president of Tourism Economics, to the New York Times in 2017.

America's fall from grace is also evident in the number of world leaders who refuse to take Trump seriously. Recently, 11 countries joined the Trans-Pacific Partnership, an agreement that, as the New York Times reports, was originally orchestrated by America before Trump came into office, then let go of during the Trump presidency. There are also 35 other trade agreements being worked out by various countries, and America is only privy to one of those agreements. A pact America was already involved in — the North American Free Trade Agreement between Canada and Mexico — is also at risk.

“Maybe there was some sort of presumption on the part of the president and his team that if the U.S. said stop, this process would come to a halt,” Phil Levy, former economist during the George W. Bush administration and a senior fellow at the Chicago Council on Global Affairs, told the New York Times. “What this shows is that’s not true. The world just moves on without us.”

America will continue to become an alienated nation the more it spurns immigrants and unleashes racist rhetoric. And just as Wakanda focuses all of its energy on preserving its way of life and building up its infrastructure despite outside sentiment, real countries may start doing the same thing. As the Trump administration closes us off from talent we used to welcome, America loses out on the various cultural heritages that make the nation the melting pot it’s been advertised to be.

Haiti and Africa influence America more than many of us realize; many of our favorite dances, art movements, music, food, as well as our national history and even the development of some of our political protests can trace its origins back to these countries. If we can’t respect the value black immigrants and descendants of African slaves bring to this country, then would we really deserve to know about a bountiful nation like Wakanda if it existed in real life, let alone benefit from its resources?

Black Panther is a film steeped in respect for Africa, and hopefully some of that respect will rub off on its viewers. No one is from a “sh*hole.” Africans and African diasporic people have just as much of a say in this world as anyone else, and to forget that is to forget the events of history. Instead of denigrating others, what we in America should do is welcome all, regardless of where they come from, what religion they have, or what culture they bring to our melting pot society. We are in strange times when we have a fictional superhero who has the potential to successfully build more cross-cultural bridges than our president, who fails us at every turn. But for better or for worse, Black Panther might be the first major superhero who can stand for all of us, and let us know we all can be powerful, too, no matter what anyone says.

More like this
Gassed Up Promises All Things Action, Risk, & Redemption
By Frances Stewart
Why Eurovision 2023's Host City Won’t Be Revealed For A While Yet
By Sam Ramsden and Rachel Mantock
Jonah Hill Explains How His Anxiety Attacks Will Change The Rest Of His Career
By Grace Wehniainen
Here’s Where Manti Te’o Is Now
By Arya Roshanian
Get Even More From Bustle — Sign Up For The Newsletter