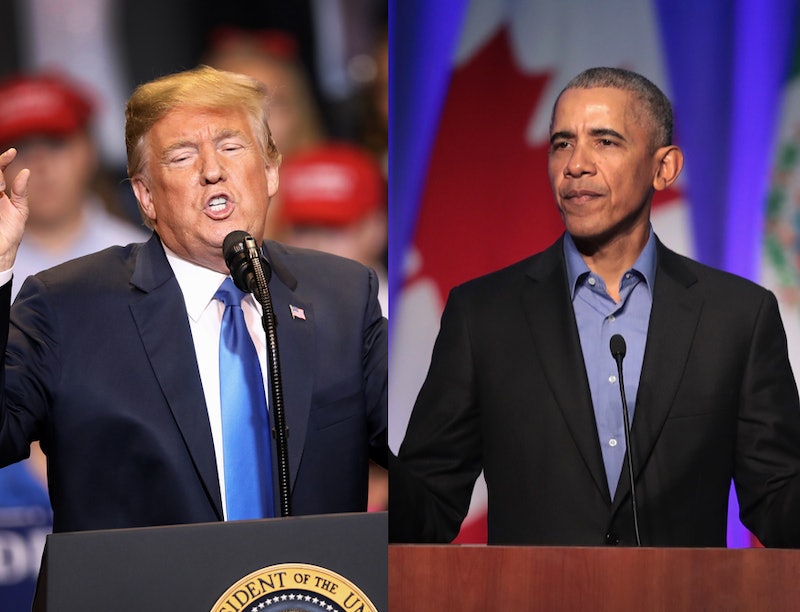 On Tuesday, White House Press Secretary Sarah Sanders claimed black employment rates are higher under Trump than they were under Obama. Sanders' claim that Trump has done much more for African-American employment than Obama might have people wondering what black unemployment rates under Trump vs. Obama look like, and whether there's a massive difference. The short answer is this: Trump's rates for black unemployment look similar to the second half of Obama's presidency — but that doesn't tell the full story for either administration.

Sanders' comments about job growth for black people were undoubtedly confusing for most people to understand, on a number of levels. She said to reporters,

The estimation of 700,000 new jobs added for black employment is accurate for the Trump administration, according to the BLS. But Sanders' estimation for Obama's presidency was off — by a lot. During the time that Obama was office, a Bloomberg analysis of the BLS data shows that approximately 3 million jobs were added and subsequently held by black workers.

Shortly after Sanders left the podium, the White House Council of Economic Advisors tweeted an "apology" for Sanders' "earlier miscommunication," attaching a photo that highlighted the real, accurate numbers. However, the numbers do not totally reflect those cited by the Bureau of Labor Statistics. That's likely because the CEA assumes Obama and Trump both took office in November, when, in reality, they took office in January of their respective election years. Later that evening, Sanders herself, also tweeted out an apology, saying "I’m sorry for the mistake."

Perhaps even more alarmingly, Sanders cited these inaccurate numbers as part of her response to a question about whether or not Trump had ever said the "n-word," a question that she claimed she couldn't "guarantee" an answer on.

She said of Trump's calling Omarosa a "dog" (which has been a racially charged insult particularly for black women throughout American history), "[It has] nothing to do with race and everything to do with the President calling out someone's lack of integrity."

She then added that she couldn't confirm there wasn't a recording of Trump saying the "n-word," explaining that she hadn't been "in every room" with him.

As for Trump himself, he has consistently taken credit for the low black unemployment rates since he became president, despite the fact that they were hovering around the same number when he entered office. In January, he tweeted, "Somebody please inform Jay-Z that because of my policies, Black Unemployment has just been reported to be at the LOWEST RATE EVER RECORDED!"