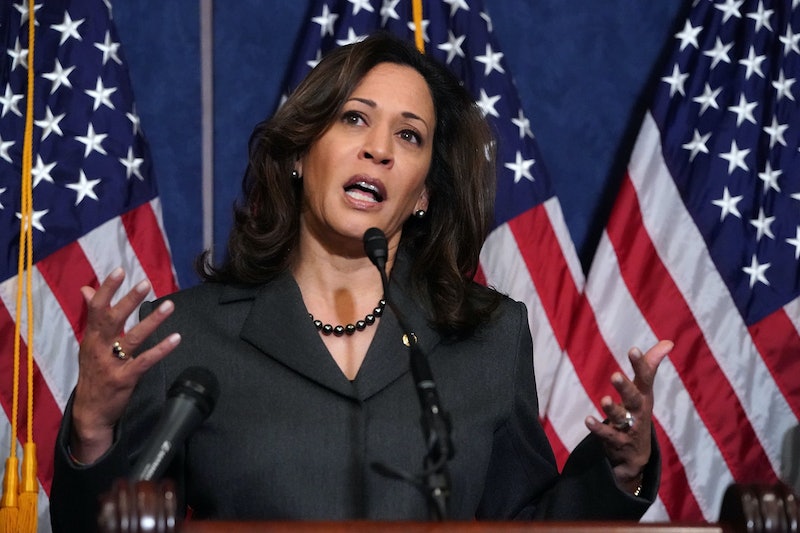 The 2016 presidential election was a wake-up call for some people about how ingrained systemic racism and sexism is in our society. With the midterm elections taking place in November, a lot of folks are hoping to flip seats in Conservative districts — and make sure they're occupied by women. A group of women have created a database to help you do just that: The Black Women In Politics database allows you to easily find the Black women candidates running for office in your district, making it easier to support their runs.

The database was created by four Black women — Luvvie Ajayi (aka, blogger Awesomely Luvvie), Sili Recio, Lucrecer Braxton, and Candace Jones — in a collaborative effort to create a comprehensive list of Black women candidates. According to Ajayi’s blog post about the database, the women decided to launch the database after the Alabama Senate race: 98 percent of Black women voted for Democratic candidate Doug Jones, preventing Roy Moore, who was accused of sexual misconduct with a minor, from winning the seat. “Black women are superheroes who save the day time and time again,” wrote Ajayi. “I am tired of the world being run into the ground by white men who prove time and time again that they are ill-equipped.” So, instead of settling for a candidate you aren’t excited about, the creators of the database are making it simple to learn about Black women candidates running in your district.

The Black Women In Politics database displays candidates in alphabetical order, and also allows users to browse by state. As of now, 410 Black women candidates running for federal, state, local, and unspecified seats have been added to the database. Under most of the women listed on the website, there’s a small description of their candidacy, and links to social media, official websites, and donation sites. The database has candidates listed that belong to different political parties.

According to Time, a record number of women are running for office since Trump’s November 2016 election win. Not only are women running for office, but the amount of Black women and women of color running for seats at all levels of government is record breaking. According to analysis by Rutgers University, of the 106 women currently serving in Congress, only 18 are Black. Moreover, only 37 Black women have ever been elected to serve in the U.S. Congress. But hopefully, after the 2018 elections, our Congress will be more diverse than it has ever been before.

Ajayi wrote on her blog the database creators don’t endorse any of the candidates, but rather, they want the site to serve as a “phonebook” for people to find the basic information about Black women who are running for political seats. “The goal is to make it easier to find the information we need to support those we have got to support. Remember: You do research from the links provided to candidate websites... These 2018 elections matter so much — locally, statewide, nationally — so we need all the information we can get," wrote Ajayi.

If you want to get involved in midterm elections, supporting the Black women running for office in your state is the perfect way to jump into this highly-anticipated election cycle. The Black Women In Politics database is a super helpful starting point, but you get to decide how you can best help with these campaigns and congress runs. Donations are always needed in abundance during political runs, so if you have the financial means, back the candidates you support in your area. If you want to be more hands-on with your political involvement, consider volunteering for the campaign, attending events, and helping out with fundraisers.

Utilizing your best skills — whether that’s social media, voter registration, or phonathon-ing — is key to supporting the campaigns of Black women. It is not the job of Black women to pick up the political pieces, or to do all the heavy labor. These candidates have taken the initiative to run for office, and it’s voters' job to show up and support them.

More like this
At 28, Melanie C Was Falling In Love & Reclaiming Her Confidence
By Olivia-Anne Cleary
Self Esteem's “F*cking Wizardry” Is An Anthem About Knowing Your Worth
By El Hunt
How To Politely Reject Someone Who Keeps Asking You Out
By Laken Howard and Lexi Inks
Romance Authors Are Mobilizing For Reproductive Rights
By Natalia Perez-Gonzalez
Get Even More From Bustle — Sign Up For The Newsletter