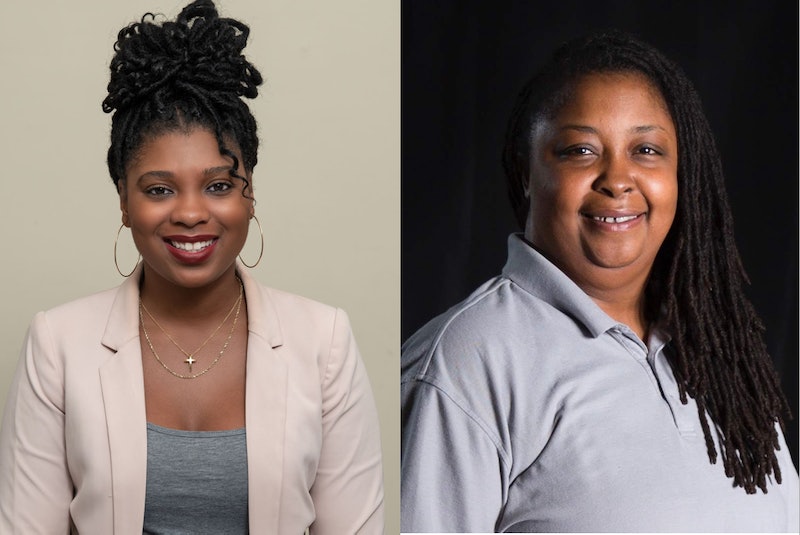 Restrictions on abortion access disproportionately impact minority communities. But it isn't just patients seeking abortions who are affected by these barriers, which are largely backed by conservative lawmakers. Abortion providers in areas of the country with restrictive abortion laws often struggle to get the necessary funding to maintain their services. Black women who are abortion providers sit at the intersection of those twin challenges, and they tell Bustle that they face unique hurdles to their work.

On top of fighting numerous legal and financial battles to defend abortion access, black women abortion providers say they have to overcome systemic discrimination within their field while simultaneously working to provide a safe space for their patients.

Taylor Austin is the state infrastructure project coordinator for The Women's Centers in Pennsylvania, a collection of abortion clinics on the East Coast. Increasing restrictions on abortion access remind Austin of the inequality that has long permeated health care spaces.

"I think that for a long time in history, women of color and black women weren’t invited into the medical field to be providers," Austin says. She adds that taking on a leadership role in this way is an important opportunity for her to make abortion care practices more inclusive.

Marva Sadler, the director of clinical services for Whole Woman's Health, shares that sentiment. Sadler says that when she started "working on abortion care" 15 years ago, she encountered many clinic employees who are women of color. But rarely did she see them take on a public-facing leadership roles in the reproductive justice movement. Sadler attributes this discrepancy to "the additional stigma in our communities," noting that certain black religious communities paint abortion as "black genocide."

"It really at one point deferred women of color from being willing to step up and be the face of the movement," Sadler says. "Now we realize...it's all about our basic human rights."

As women of color — and especially black women — continue to rally around reproductive justice, Sadler notes that clinics like Whole Woman's Health strive to stay representative of the communities they serve. She says it's important for patients of color to see health care providers who look like them and who share their lived experiences, because that builds trust.

"We trust those we feel that we can relate to," Sadler says. "It’s hard to trust, especially when you’re talking about abortion, which again is so stigmatized."

It's especially vital for abortion providers to reflect the communities they serve given the disproportionate impact that anti-abortion legislation has on disenfranchised communities. Take the Hyde Amendment, which bars federal Medicaid funds from being used for abortion services. Yamani Hernandez, the executive director of the National Network of Abortion Funds, previously told Bustle that such legislation specifically targets people without "generational wealth," such as communities of color and low-income people.

More recently, Hernandez tells Bustle that issues of abortion access have persisted ever since Roe v. Wade was decided. "Having Roe has not ensured abortion access for hundreds of thousands of people every year who cannot afford it," she says.

Sadler and Austin express pride and passion in their work in the face of the legal and systemic hurdles. However, they say their work as black women fighting for reproductive justice also requires significant emotional labor.

Austin's job as project coordinator sees her working at a clinic's front desk on occasion. As a result, she says she is often the first person with whom patients interact. Knowing that anti-abortion legislation disproportionately impacts people who look like her can have an emotional toll.

"As a person of color, I’m having to look another person of color or patient in their eyes and tell them that these unnecessary restrictions are something they still have to undergo in order to receive the care that they desire," Austin says.

Despite the barriers to entry, Sadler emphasizes that there is space for women of color to support abortion clinics, become health care providers, or find other ways to support movements for reproductive justice and combat structural inequality.

"I just want other young women of color to know that there is room here," Sadler says. "There are so many ways to support this work. But we as black women must get involved and we must stay involved and when we do, our voice is so powerful that it changes tides and waves and we need to continue to do that."