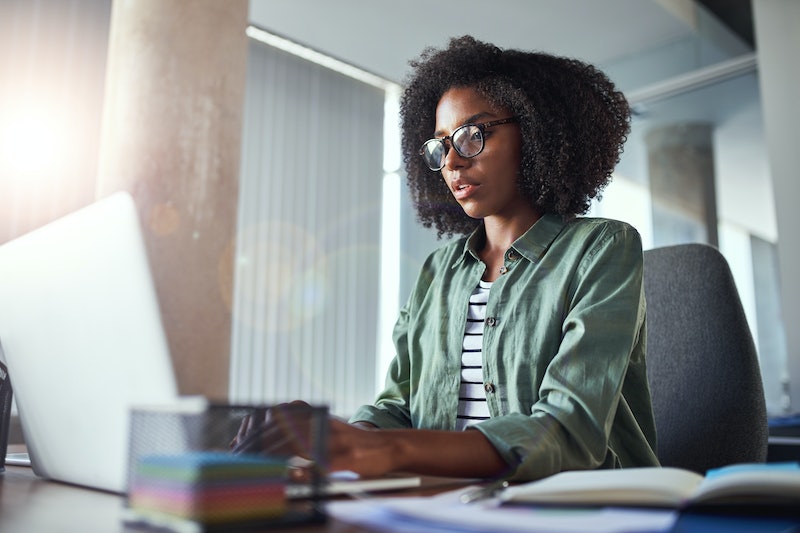 This year in the U.S., black women had to work until Aug. 22 to make as much money as white men did in 2018. Black women also had to work over four months longer into 2019 than the average American woman, whose Equal Pay Day was April 2. But according to a new survey, the majority of Americans don't realize the specific reasons why Black Women's Equal Pay Day exists.

The aforementioned poll was conducted by Lean In, an organization that fights bias and "advocates for better public policies and a more equitable workplace," according to its website, alongside Survey Monkey in early August. In addition to finding that 53% of Americans don't know about the pay gap between black and white women, the poll also revealed some more startling findings about Americans' awareness of equal pay issues and how they particularly affect black women. For example, the survey revealed that over one in three Americans aren't aware of the pay gap between black women and white men. On top of that, around 50% of Americans said that they thought obstacles to black women's advancement had been eliminated.

It's absolutely crucial that Americans take these issues into account, one of many reasons being that black women are very often the breadwinners for their families. As Lean In pointed out when discussing survey results on its website, "80% of Black mothers are the main breadwinners for their households." Therefore, the organization added, the dual gender and race-based pay discrimination faced by black women profoundly " ... impacts families’ ability to buy groceries, pay for childcare, invest in their children’s education, and more."

Sarah Fleisch Fink, the general counsel and director of workplace policy at the National Partnership for Women & Families, tells Bustle that the pay gap for black women is reflective of the extensive discrimination that they have faced throughout history.

“It’s important for people to understand that the wage gap experienced by Black women in the United States is about much more than a cents-on-the-dollar figure," she says to Bustle. "It represents historic systemic barriers — to quality jobs, quality health care, reproductive care and housing — and a devaluation of Black women and their labor, both paid and unpaid. Our country will never achieve equality until we fully recognize the gender wage gap and that it is especially punishing for women of color.”

Leng Leng Chancey, the executive director of 9to5 National Association of Working Women, an organization dedicated to improving working conditions for women and families, also emphasizes that it's absolutely crucial to raise awareness of the unique pay discrimination barriers faced by black women.

"Black women — and all women of color — get penalized twice on payday because they face both gender and race discrimination," she tells Bustle. "We need to shout about it today, on Black Women's Equal Pay Day, and work to fix the problem by telling Congress to pass the Paycheck Fairness Act now!"

The Paycheck Fairness Act that Chancey mentions is a piece of legislation introduced by Congress in early 2019. The bill seeks to fix loopholes in 1963's Equal Pay Act to help guarantee that men and women are compensated equally for equal work, the American Association of University Women (AAUW) noted. The Paycheck Fairness Act passed the House back in March and is currently being considered by the Senate, Congress.gov revealed.

The pay gap for black women is certainly an enormous problem — with far-reaching consequences — that requires urgent attention. So, on this day, consider spreading the word about the pay discrimination black women face — and encouraging your legislators to pass the Paycheck Fairness Act.