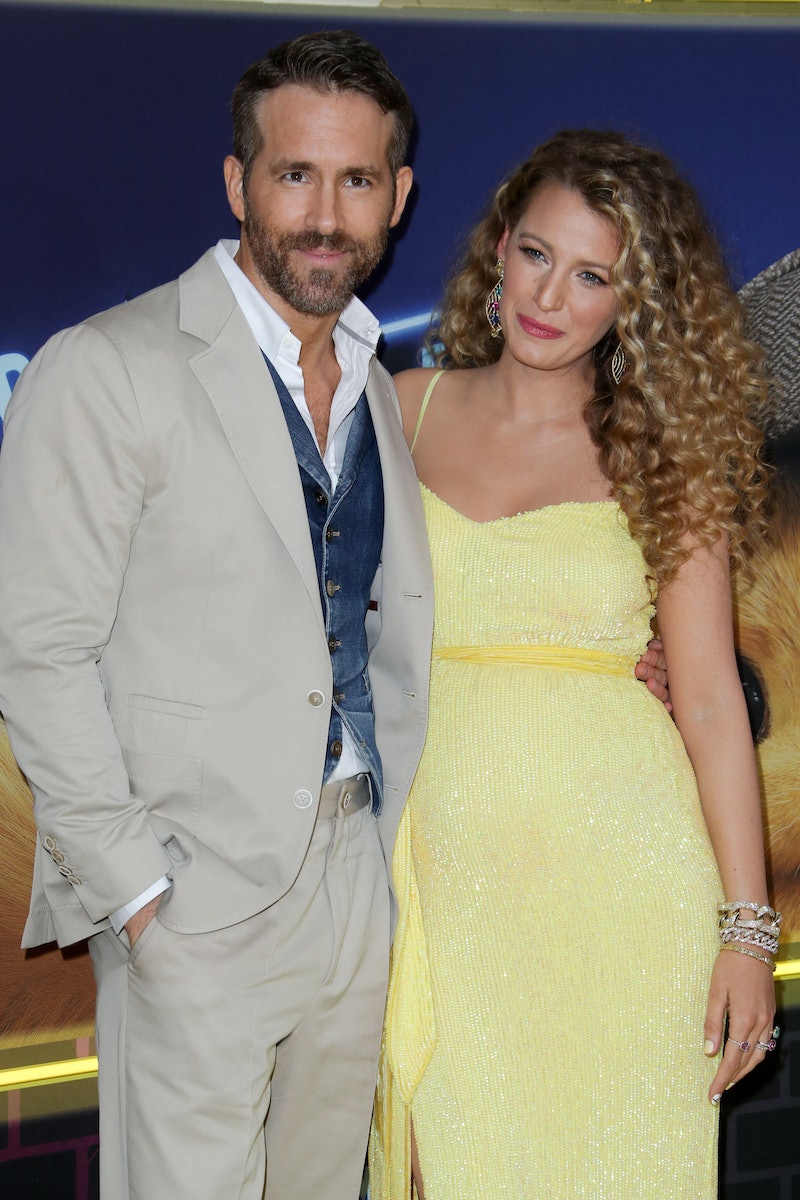 During the Thursday, May 2 premiere of Detective Pikachu, Blake Lively and Ryan Reynolds revealed they are expecting their third child. In the red carpet photos from the premiere, Lively is visibly pregnant and the couple seems to be radiating happiness. (Bustle reached out to Lively's reps to confirm the news, but did not immediately hear back.)

Lively walked the red carpet in a lovely sparkling yellow Retrofête's Rebecca dress at the film's premiere in New York City. She and Reynolds currently have two young children: daughters James, who was born in 2014, and Inez, who was born in 2016. Lively and Reynolds have been married since 2012 after meeting on the set of the 2011 movie Green Lantern. The couple is active on social media and both Lively and Reynolds have public careers, but they've kept their children out of the spotlight. James and Inez made a rare public appearance with their parents at Reynolds' 2016 Hollywood Walk Of Fame ceremony.

Lively and Reynolds have seemed to always want a big family. Lively told Marie Claire in 2014 that "if I could spit out a litter of kids, I would." Last year, rumors circulated that the couple was planning to have another child.

While the couple made an appearance at the premiere, James and Inez — who are both big Pokémon fans — didn't seem to be in attendance. Earlier on Thursday, Reynolds told Good Morning America, "My daughter James is losing her mind over [Detective Pikachu]. She's never been interested in a movie I've done ever."

And James turned out to be the main reason Reynolds decided to take on the role of voicing the famous Pokémon, according to an interview in Entertainment Tonight. "[The filmmakers] sent me this fully rendered Detective Pikachu and they married it and paired it with my voice from dialogue from Deadpool," he explained to ET.

Detective Pikachu follows the titular Pokémon (voiced by Reynolds) and it's based on the 2016 video game of the same name.

"So I'm watching and looking at this completely hyper-realistic photorealistic Detective Pikachu on my computer, and my daughter kind of cruises by and is glued to it. She made us watch it a hundred times in a row. So I was kind of in, even if the script was literally made of old spit I would have been like, 'Yup, I'm doing it. I'm in.' I need more of that validation from my child."

Family has always been #1 to the couple. In an interview published earlier on Thursday, Reynolds told People that he and Lively don't film movies at the same time in order be able to see each other and their kids. "We operate as a unit, and that works really well for us,” Reynolds told People. “The kids stay with us, and the family stays together, and that is where home is. So if we are in Spain or Utah or New York, as long as we are together, we’re home.”

And soon, home will have a brand new addition for the couple.