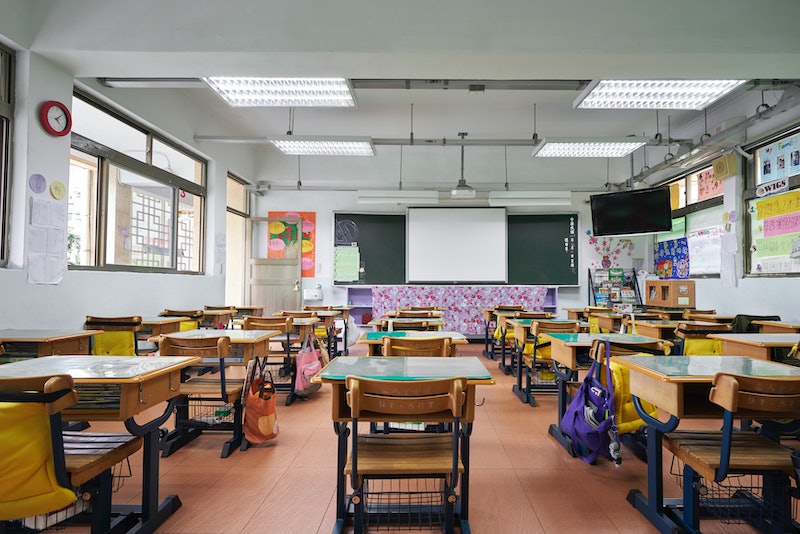 In the wake of at least 45 school shootings in the U.S. in 2019, as of November, thousands of schools are stocking up on bleed control kits and training administrators and teachers how to treat gunshot wounds. Public schools across the country are getting free training and bleed control kits through a program called Stop the Bleed, which aims to teach more people how to treat blood loss from traumatic injury until first responders arrive.

The nationwide Stop the Bleed program began after the Sandy Hook School shooting in 2012, where 20 young schoolchildren and six school staff were shot and killed. Stop the Bleed Georgia has already placed kits in 2,156 public schools across the state, according to Billy Kunkle, who helps run the state’s Stop the Bleed program and serves as deputy director of the Georgia Trauma Commission. Kunkle expects that by early 2020, all public schools in Georgia will be equipped with kits and trained staff.

Kunkle says that initially, the program got some pushback in Georgia because of the implications of bringing gunshot wound care into schools. “Initially people said ‘no, if we do that, it'll make people feel like our kids aren't safe,’” he says. However, Kunkle says schools saw the benefits of placing kits outweighed these hesitations.

Stop the Bleed was eventually able to implement their statewide program, and Kunkle says they even got requests from private schools seeking to purchase the kits and training. Since the state’s program launched in 2017, there have been seven incidents where school staff have had to use the bleeding control kits — none of which were the result of gun violence. That’s part of the reason why Kunkle believes these kits are so important, even beyond the scope of school shootings. “These are things that can be used in everyday life,” he says, pointing to the fact that trauma is the number one cause of death of people up to the age of 44.

According to the American College of Surgeons (ACS), hemorrhage in the first few minutes after a traumatic event is the most common cause of death from traumatic injuries, and it’s preventable. The ACS says that 180,000 people die every year from bleeding out from traumatic injuries, including gunshot wounds. “[Bleed control training] really does simply have everyday applications that far outweigh the implications,” Kunkle says, referencing the hesitation that some people felt before the kits were placed in schools.

Each course is only about an hour and a half long, and teaches attendees how to properly apply pressure, pack wounds, and use tourniquets to temporarily slow or stop bleeding. The kits include items like gauze, triangle bandages, and tourniquets, according to Kunkle.

While proponents of the initiative see it as a way to stay prepared and save lives in an emergency, Shannon Watts, a gun-control activist and founder of the advocacy group Moms Demand Action, says initiatives like this only address the symptoms of a nationwide problem, not the source.

“I think it's incredibly dystopian that the federal government wants to fund a program that forces children to treat other children's gunshot wounds,” Watts tells Bustle.

While Georgia started the process of equipping schools with bleed control kits voluntarily, Texas enacted a law this year requiring that kits be placed in schools by 2020. With over 5 million students, Texas has one of the country’s largest public school systems. The state was also home to this year’s largest mass shooting, which left 22 people killed and 24 wounded at a Walmart in El Paso in August. Illinois, Colorado, and Maryland have also begun rolling out programs to place kits in schools.

For Watts, initiatives like Stop the Bleed are like putting a band-aid over what she sees as a national epidemic of gun violence. “I would say that we are failing our children if the best we can do to protect them is to give them gauze,” Watts says. “If we are serious about keeping children safe, then we have to intervene long before an emergency occurs.”

“They don't want us to talk about the real problem that we have in this country.”

Watts founded Moms Demand Action immediately after the Sandy Hook shooting, and the organization now operates in all 50 states under the umbrella of Everytown for Gun Safety, a nonprofit that advocates for gun safety and leads research on gun violence in America. Moms Demand Action takes a grassroots approach by bringing together parents to push for policy change on both state and federal levels, and even helped lawmakers in Ohio create an office dedicated to addressing gun violence in schools. Large-scale policy reform, and not reactive trainings, is the solution to gun deaths and school shootings, Watts says. “When we look at decades of research, we actually do know how to keep children safe from gun violence in schools,” Watts says, “and that's by keeping guns out of the hands of dangerous people or minors, and intervening before any violence happens.”

Kunkle’s work focuses on raising awareness about trauma care, and he says Stop the Bleed aims to be apolitical. He believes that, at least in Georgia, gun ownership is not the problem. “The absolute truth is most of the time that you have an incident, gun ownership by legal gun owners isn't what caused the problem,” he says. Kunkle adds that since Stop the Bleed’s training teaches attendees how to treat blood loss from many types of injuries, its benefits expand beyond the gun debate.

Stop the Bleed’s courses hit over 1 million attendees this year, but the number of school shootings that occur in the United States, though they’re still rare, is on the rise. According to the Center for Homeland Defense and Security, there’s been a steady increase in frequency of school shootings since 2010, with 2018 being the most violent year by far. Watts says conversations about instructing teachers in trauma care or giving children bulletproof backpacks shift the focus away from systemic prevention.

“There are these recurring straw men that are deployed every time there's a mass shooting tragedy because they don't want us to talk about the real problem that we have in this country,” Watts says of gun lobbyists who push to keep guns accessible. “The reason Americans are 25 times more likely to be killed by gun homicide is because we have 400 million guns in the hands of civilians and too few gun laws.”

As a mother of five, Watts says she understands that parents might fear for their children’s safety at school and lean on individual-scale solutions like backpack armor or first aid training. Though Watts highlights the policy victories Moms Demand Action have gathered over the past years, including getting more states to conduct background checks and blocking gun lobby-backed bills, she says addressing the source gun violence means recognizing that the United States is an outlier.

“This is a uniquely American phenomenon,” Watts says. “Americans should demand that resources are allocated to preventing these tragedies before they occur, not simply stem the blood flow once they have.”

More like this
Why Experts Say Sleeping With A Fan On Isn’t Totally Risk-Free
By Sophie McEvoy
25 Things I've Reduced My Life To, In Addition To WFH In My PJs
By Ginny Hogan
The Lionesses Are Calling For Equal Access To Football In Schools
By Sophie McEvoy
Kim Kardashian Is Releasing A Line Of Earbuds With Beats
By Alexis Morillo
Get Even More From Bustle — Sign Up For The Newsletter