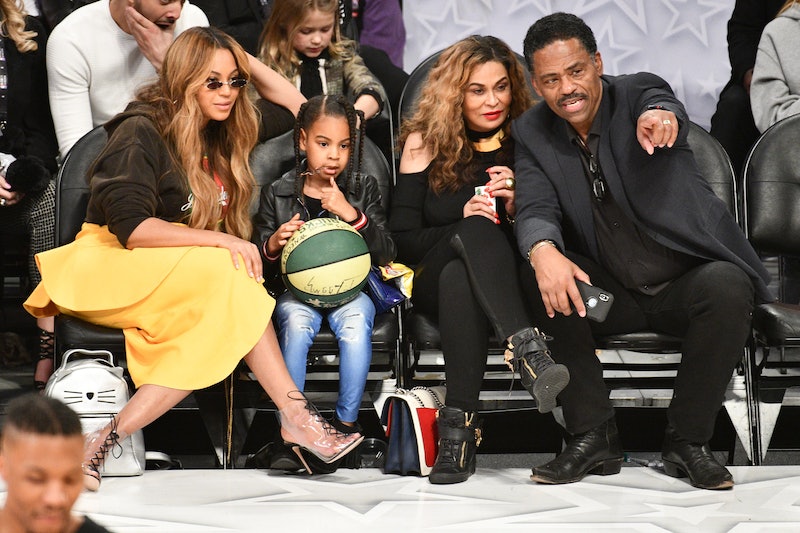 The Knowles-Carter family members have many talents. For instance, on Sunday, Blue Ivy Carter shared a corny joke with her grandmother Tina Knowles Lawson on Instagram, as pointed out by E! News. Beyoncé and Jay-Z's oldest daughter clearly spent quality time with her grandma over the weekend, and Lawson took the opportunity to share a highlight from their time together with her followers.

Lawson, who often shares cheesy jokes online, captured the comedic moment, and fans were loving Blue Ivy's appearance. "Hi, it's corny joke time. I'm here with a very special guest, my beautiful granddaughter she actually gave me the joke, so here it goes," Lawson began the video. Blue does not appear on camera, but did give a little wave to show fans she was just off-screen.

Blue asked, "So, how many petals, I mean how many lips does a flower have?" Lawson responded, "How many?" Delivering the punchline, Blue said, "Two lips." Her grandmother smiled, but Blue explained the joke just to make sure she understood: "Do you get it? There's a kind of flower called a tulip." Lawson assured her granddaughter that she understood. "I got it, I got it," she said, laughing. Lawson captioned the post, "Corny joke time with A special guest!!" with a heart emoji.

Friends and fans shared plenty of love for the silly video in the comments. Jessica Alba wrote, "i want to be a special guest" with a laughing emoji. One fan commented, "She a force of nature!!" with heart emojis, while another wrote, "Blue Blue is such a comedic legend." Many also commented on how grown-up Blue Ivy, who is 7, already seems.

The Knowles family matriarch usually films her "corny joke time" videos solo. On March 14, Lawson shared another joke video on Instagram featuring her own joke delivering skills. "Hi, it's corny joke time," she said. "So, why do bears not wear shoes? What's the use?" Back on March 9, she shared yet another punchline on the platform, captioning the video, "Happy Saturday guys it’s corny joke time" with a laughing and crying emoji. "So, what did the evil chicken lay?" she said. "Deviled eggs, of course. Oooh!"

Blue had not yet appeared in her grandmother's weekly corny joke posts, but it's not the first time she's made a cameo on her Instagram. In May 2018, Blue Ivy caught Lawson filming at a ballet while on vacation in Paris, France. Lawson tried to give fans a peek into the beautiful theater, but her granddaughter caught her breaking the rules. "You're not supposed to take videos, grandma!" Blue said in the background. "You're not supposed to."

Beyoncé and Jay-Z's daughter is also no stranger to stealing the show with humor. In 2018, Blue captured hearts at the Grammy Awards after cameras caught her quieting down her parents during Camila Cabello's acceptance speech. Bey and Jay brought Blue to the Grammys in 2017 as well, where she once again stole the scene cheering for her mother.

It's been clear for a long time that Blue has star power, but Lawson's latest Instagram post shows her granddaughter is a comedian as well. The corny joke time videos are already pretty funny, but fans agreed that Blue Ivy's guest role made this one extra special.